Home » Australasia » In the World’s Longest Lockdown, One Man is Omnipresent

Daniel Andrews, Victoria’s premier, has conducted 100 consecutive daily news conferences. In Melbourne, we all watch. We are all exhausted. 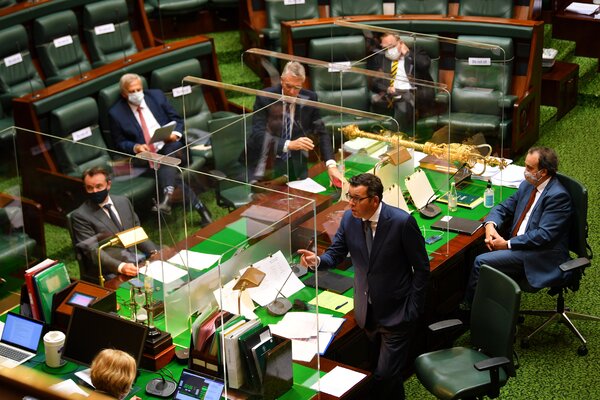 The Australia Letter is a weekly newsletter from our Australia bureau. Sign up to get it by email.

News conferences from state-level politicians are often bigger news in Australia than they might be elsewhere — maybe it reflects voter engagement or just a slower news cycle. But because most of metropolitan Melbourne’s five million residents are stuck at home, and because Andrews’ remarks serve as the best and most reliable update on the circumstances of our lives, these daily events have become a kind of communal spectacle.

It is now a ritual for many of us to wake up, wait for the daily tally of new cases to be released, and then wait to hear when Andrews’ news conference will take place. There’s even a Twitter account dedicated to answering that question, with the handle @WhatTimeIsDansPresser.

His daily briefings range from the dramatic — like the day he announced that thousands of people in nine public housing towers would effectively and immediately be put under house arrest — to the mundane. They inspire viral moments, hashtags (#dictatordan, #istandwithdan, #getonthebeers) and memes, and we are all there to watch these cultural curiosities unfold in real time.

Mr. Andrews, who has been Victoria’s premier since 2014, has a policy of staying through every single question from the press gallery, and much of the recent Australian media coverage of his pandemic marathon has focused on what these 100 days of conferences tell us about journalism, and also about the online abuse many participating journalists face from the pro and anti-Andrews camps.

Abandoned Rio Tinto Mine Is Blamed for Poisoned Bougainville Rivers

In Melbourne, Springtime Ushers in a New Sense of Hope