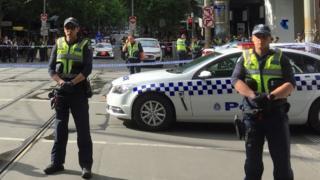 A man has been arrested after setting a car on fire and stabbing three people – one fatally – in central Melbourne, Australia.

The attacker was shot by police after confronting officers on a busy city street, authorities said. He was taken into custody in a critical condition.

The two survivors were taken to hospital – one in a suspected critical condition.

Police said they were “not looking for anyone further at this early stage”.

It was too early to say if the incident was terror-related, they said.

Officers were initially called to reports of a car fire near Bourke Street, a busy thoroughfare, at about 16:20 local time (05:20 GMT).

“As they got out of the car, they were confronted by a male brandishing a knife and threatening them,” Supt David Clayton said in a news conference.

“At the same time, passers-by were calling out that members of the public had been stabbed.”

Police said the scene had been cordoned off, and it was being “made safe” by a bomb response unit.

Footage circulating on social media shows a vehicle, which appears to have crashed into shop fronts, on fire.

The police and State Premier Daniel Andrews asked people to avoid the area.