To China, Trump Was Bad. Biden Seems Even Worse.

Accusations of hacking and other moves by the Biden administration have surprised and angered China’s leaders, who are pushing back with punitive actions and vitriol of their own. 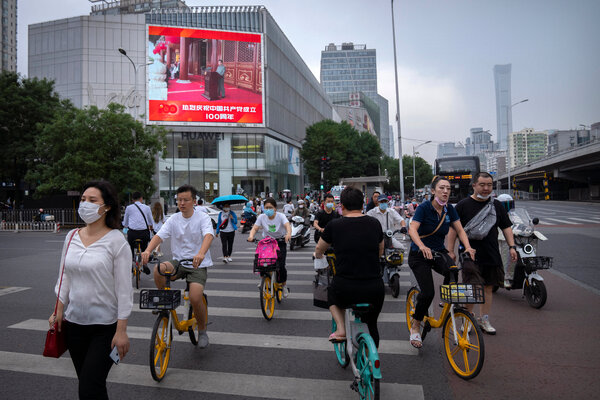 From China’s perspective, the blows from the United States just keep coming. Sanctions and export controls over the crackdown in Xinjiang. A warning to international businesses about the deteriorating climate in Hong Kong. The rejection of visas for students and researchers suspected of having links to the People’s Liberation Army.

Now the United States has rallied a broad array of nations to accuse the Chinese Ministry of State Security not only of cyberespionage but also of hacking for profit and political intrigue.

The torrent of attacks has infuriated Beijing, but six months into the tenure of President Biden, the Communist Party leadership has yet to find an effective strategy to counter the American moves.

In Beijing’s view, Mr. Biden has taken a more strategic approach than his predecessor, enlisting allies to join his campaign against Chinese behavior in ways that appear to have frustrated officials. China has resorted to its usual instinct for tit-for-tat measures, while lashing out with a heavy dose of vitriol and sarcasm.

Although both sides have said that they want to avoid a new Cold War, they are plunging into an increasingly ideological conflict that shows little sign of easing. The result has been a deterioration of relations that, to the surprise of many in Beijing, has surpassed even the four tumultuous years of dealing with President Donald J. Trump.

“The United States has declared its comeback, but the world has changed,” Le Yucheng, a vice minister of foreign affairs, said in a recent interview with the nationalistic news site Guancha.cn, echoing a Biden administration catchphrase. “The United States needs to see these changes, adapt to them, and reflect upon and correct its mistakes in the past.”

It is not clear whether the Chinese leader, Xi Jinping, has formally signaled a change in foreign policy strategy, but judging from public statements and actions in recent weeks, patience with the Biden administration has worn thin.

China has retaliated against American and European sanctions over China’s political repression in Hong Kong and Xinjiang with sanctions of its own. It has reined in the public offerings of Chinese companies on American stock exchanges. And it has stepped up military activity in the South China Sea and in the water and air around Taiwan in response to a more visceral American policy of support for the island democracy under Mr. Biden.

The quickening tempo of military operations increases the chances of armed confrontation — even if accidental. The incendiary language emanating from some officials and state media in China would make climbing down even more difficult, given a nationalistic mood at home.