Home » Asia » ‘Tell Everyone We Scalped You!’ How Caste Still Rules in India

‘Tell Everyone We Scalped You!’ How Caste Still Rules in India

THATI, India — When Sardar Singh Jatav set out walking on a muggy night in early September to talk with the men who employed his son, he found them already waiting for him in the road. But they were not in the mood for discussion.

The higher-caste men greeted Mr. Sardar with a punch to the face. Then they broke his arm. Then they pinned him down. Mr. Sardar shrieked for help. Nobody came.

One higher-caste man stuffed a rag in his mouth. Another gleefully pulled out a razor. He grabbed Mr. Sardar’s scalp and began to lift and cut, lift and cut, carving off nearly every inch of skin.

“Take that!” Mr. Sardar remembers them saying. “Tell everyone we scalped you!”

Mr. Sardar is a Dalit, a class of Indians who are not just considered lower caste, but technically outcaste — what used to be called untouchable. Bound at the bottom of India’s Hindu society for centuries, the Dalit population, now estimated at more than 300 million, has been abused for as long as anyone can remember.

And now, according to crime statistics, the violence against them is rising.

This might seem surprising against the new narrative India is writing. So much has changed. Millions of people have been lifted out of poverty. The Indian economy is now one of the world’s biggest. Everywhere in the country, there are new roads, new airports, new infrastructure.

But in many places, especially in poorer rural areas, caste infrastructure is still the one that counts. And those who rebel against it, like Mr. Sardar, are often greeted with unchecked brutality. 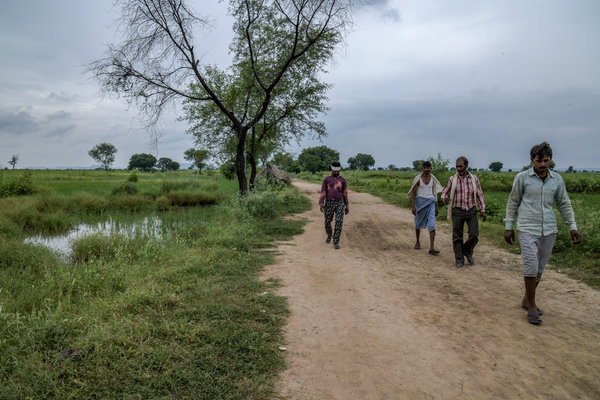 It is violence intended to send a message, pain inflicted to maintain India’s old social order. The crimes are happening across the country and Dalits are not simply killed: They are humiliated, tortured, disfigured, destroyed.

“We have a mental illness,” said Avatthi Ramaiah, a sociology professor in Mumbai.

“You may talk about India being a world power, a global power, sending satellites into space,” he said. “But the outside world has an image of India they don’t know. As long as Hinduism is strong, caste will be strong, and as long as there is caste, there will be lower caste,” he added.

”The lower castes don’t have the critical numbers to counterattack,” he said. And the result has been violence that he described as “intimate, sadistic and cruel.”

In late October, a 14-year-old Dalit girl was beheaded by an upper-caste man whose wife said he hated the girl specifically because of her caste. A Dalit scavenger was tied up and fatally whipped outside a factory in May, in a beating captured on video and broadcast across India. In March, a Dalit man was killed by higher-caste men for riding a horse (traditionally, Dalits aren’t supposed to do that).

“Such incidents would not have happened in my childhood,” said Chandra Bhan Prasad, a well-known political commentator (and a Dalit). “In my childhood, a Dalit would not ride a horse. Before 1990, most Dalits worked for someone. Now they are paying a price for their freedom.”

For decades, India has struggled to de-weaponize caste. When the Constitution was being written in the late 1940s, intellectuals knew caste was a sore spot that needed to be urgently addressed. They included specific protections for Dalits, who make up about 15 to 20 percent of India’s 1.3 billion people.

Affirmative action programs, though they have generated deep resentments among upper castes, have helped some Dalits escape poverty. Today there are Dalit poets, doctors, civil service officers, engineers, and even a Dalit president, though it is mostly a ceremonial post.

But 95 percent of Indians still marry within their caste, experts say. And recent studies show income and education levels correlate very closely with caste. Even controlling for education, Dalits still fall behind, indicating that caste discrimination is alive and well in the workplace.

Scholars argue that the current political environment has increased the vilification of the other — whether that be along caste, creed or gender lines. According to national crime statistics, the number of caste-based crimes has increased 25 percent since 2010, reaching nearly 41,000 cases in 2016, the last year on record.

Many analysts blame the ruling party, the Bharatiya Janata Party, whose Hindu supremacist roots have emboldened supporters to lash out at minorities, often in the name of Hinduism. One example is the rash of people beaten up or killed for slaughtering cows. The animals are revered in Hinduism and the vast majority of the victims of the cow viligante squads are Muslims or Dalits.

Experts say this violence is committed to sow terror. They liken it to the many well-publicized horrors inflicted on women here, intended to dehumanize and put people in their place.

Another factor may be that Dalits like Mr. Sardar are speaking out more, demanding what is theirs.

What ignited the confrontation that night in September was Mr. Sardar’s insistence that the higher-caste landlords pay his son about $80 in back wages that he was owed for working in their rice paddies.

“All I asked for was what I was due,’’ said Mr. Sardar, who has a large, rounded forehead, a square jaw and a strong handshake, even while lying on his back in a hospital bed.

His village, Thati, is about 200 miles south of India’s capital, New Delhi. It is home to about 300 families, squeezed together in little brick houses that on a recent day wore a fine coat of dust. Women scrubbed pots with handfuls of mud, and older men lay shirtless on rope cots.

In traditional Indian society, castes designated occupations. The untouchables were the ones who did the dirty work, such as skinning animals or cleaning toilets. Today the caste-occupation relationship has broken down a bit; in Thati just about all the families, whatever their caste, are involving in farming.

But Thati still observes an old social order that the arrival of electricity, cellphones and more opportunity for the lower castes has not dismantled.

The Gujjars, who are hardly at the top of the overall caste ladder, are the most powerful caste here and own most of the land. Gujjars live in bigger homes, and many have tractors and small cars. Most Dalits don’t even have bicycles.

Dalits must show Gujjars respect. They are not supposed to look Gujjars in the eye or touch their food or water cups — Gujjars would consider it polluted. The two castes have separate water taps, like in the Jim Crow American south.

All of this is illegal.

India’s Constitution specifically prohibits the practice of “untouchability,’’ though recent surveys show many Indians still do it, even in cities.

At the edge of Thati village stands a sacred peepal tree. Beneath its nubby branches lies a small Hindu temple. Dalits are not allowed to sit at this temple, but any Gujjar, including a child, can. This is how it goes for many Dalits, their life circumscribed by what they are not allowed to do.

When one young Dalit man said he was willing to break the taboo, another quickly grabbed his arm and said: “Don’t! If you do, there will be a fight tomorrow.’’

While this was happening, a Gujjar farmer happened to walk by. Seeing three journalists talking to the Dalit men, he couldn’t resist joining the discussion. He insisted that Thati was a happy place and that Dalits and Gujjars lived “like brothers.’’

”Brothers?’’ one Dalit man shot back. “Brothers don’t scalp each other!”

Police officers have arrested several Gujjar men accused in the attack on Mr. Sardar, who is around 55 years old — he’s not exactly sure of his age. But the authorities say that caste played “no role” and that the crime was precipitated by a personal dispute between Mr. Sardar and a landlord.

That claim made Mr. Sardar laugh — a dry, bitter laugh. He shook his bandaged head, still recovering from a painful skin graft from his thigh. It’s a common complaint: that the police (who are usually from higher castes) always side against the Dalits.

One police commander tried to claim that the assailants hadn’t intended to scalp Mr. Sardar but that part of his scalp had simply fallen off when they hit him in the head with a stick. Two doctors who treated Mr. Sardar at a government hospital disagreed. They said just about all the skin on the top of his head had been forcibly removed with a sharp instrument, leaving his skull undamaged but much of the bone exposed.

Mr. Sardar said that while he was being scalped, the Gujjars taunted him for wearing a turban, something that Dalits are not supposed to do. He remembers the men saying: “We’re going to take away your crown.’’

Now, he said, he is going to bear a horrible scar that will remind him, for the rest of his life, what the higher caste men did to him.

“I wish I were a different caste,’’ he sighed.