MANILA — Tensions in the disputed South China Sea ratcheted up on Thursday as the Philippine government protested the sinking of a Filipino boat by a Chinese fishing vessel, which left 22 Filipino fishermen floating at sea before they were rescued by a Vietnamese boat.

President Rodrigo Duterte’s spokesman, Salvador Panelo, demanded that China investigate the Sunday collision and punish the crew of the Chinese boat, which the Philippine government said had intentionally struck the vessel, leaving the Filipino fishermen at the “mercy of the elements.”

“Such an act of desertion is as inhuman as it is barbaric,” Mr. Panelo said in a statement.

Ian Storey, a senior fellow at the ISEAS-Yusof Ishak Institute in Singapore and an expert on the geopolitics of the South China Sea, said that if the Chinese vessel had deliberately rammed a stationary Filipino boat, it would be a clear breach of international norms.

“That’s not only an act of aggression but a violation of the age-old obligation to assist mariners in distress, irrespective of whether the ships are operating in disputed waters,” Mr. Storey said.

With six governments — those of China, the Philippines, Vietnam, Malaysia, Taiwan and Brunei — claiming overlapping parts of the South China Sea, the resource-rich waterway is a potential flash point for regional military conflict.

Anxiety heightened several years ago when China began turning disputed shoals in the South China Sea into fortified artificial islands. On the reclaimed turf, the Chinese military now has shelters for surface-to-air missiles and the capacity to land fighter jets, even though an international tribunal ruled in 2016 that Beijing has no right to claim any of the spits of land as its own.

The Philippines was the country that took China to court, and the tribunal at The Hague delivered a resounding rebuke to Beijing’s territorial ambitions. 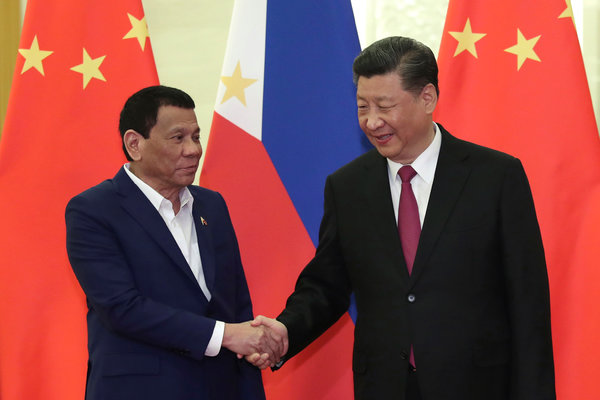 But since taking office in 2016, just days after that ruling, President Rodrigo Duterte of the Philippines has courted China as a strategic partner and distanced himself from the United States, the Philippines’ traditional ally. Mr. Duterte has suggested that a smaller country like the Philippines cannot dislodge a geopolitical power like China and must accept the reality of the new security landscape.

Mr. Duterte most recent trip to China, in the spring, was his fourth since becoming president, and he returned yet again with billions of dollars’ worth of pledges from Chinese businessmen.

But the sinking of the Filipino boat, FB Gimber1, which came after a swarm of hundreds of Chinese vessels blocked Filipino fishermen from reaching their traditional fishing grounds earlier this year, has thrown bilateral relations off balance.

Filipino politicians on both sides of the aisle were demanding answers from China. It was not clear whether the sinking, if not accidental, was in any way directed by Beijing or simply a rogue act.

“Even if this is a Chinese fishing boat, I think this is just an incident among the people, not related to governments,” said Hu Bo, an associate researcher at the Institute of Ocean Research at Peking University in Beijing.

In years past, Chinese fishing boats have launched assertive forays into disputed waters, with white hulls, as Coast Guard ships are known, keeping a discreet distance.

But in some cases, the Chinese Coast Guard has intervened directly, such as in 2016, when it forced the breaking of the tow line of an Indonesian maritime task force vessel, which had been hauling in a Chinese fishing boat operating well within Indonesia’s exclusive economic zone.

On Wednesday, Defense Secretary Delfin Lorenzana of the Philippines said the Chinese boat had intentionally rammed the FB Gimber1 as it was anchored near Reed Bank, known in the Philippines as Recto Bank, a disputed area where the two countries have discussed jointly exploring for oil and gas.

“We condemn in the strongest terms the cowardly action of the Chinese fishing vessel and its crew for abandoning the Filipino crew,” Mr. Lorenzana said. “This is not the expected action from a responsible and friendly people.”

In Beijing, a spokesman at the Ministry of Foreign Affairs called the incident “an ordinary maritime traffic accident.” The spokesman, Geng Shuang, refused to say whether the Chinese ship was responsible, saying China would address that question directly with the Philippines. But whichever side caused the collision, “their escape should be condemned,” Mr. Geng said.

Another Chinese official, Wu Shicun, with the National Institute for South China Sea Studies, said there was no proof that a Chinese fishing vessel was responsible for the ramming of the Philippine boat, much less the abandonment of its crew. Then he questioned whether the vessel was Chinese at all.

“He has no 100 percent proof that it was Chinese fishermen,” Mr. Wu said of Mr. Lorenzana.

“I don’t think it was the Chinese fishing boat’s intention to sink the Philippine boat,” Mr. Wu said, suggesting that the offending vessel could have been Vietnamese.

Vietnamese fishermen have complained of Chinese fishing boats, equipped with satellite technology and high-pressure hoses, ramming their vessels in disputed waters and taking their valuables.

Echoing the assessment of the Philippine military’s western command, a former chief of the Philippine Navy, Alexander Pama, said there was no doubt that the Chinese vessel had intentionally hit the Philippine boat. He recommended that both countries agree on a “neutral body” to investigate the collision and offer recommendations in line with international law.

Beijing has ignored the 2016 tribunal ruling that dismissed its territorial claims to most of the South China Sea.

Mr. Pama has been on the forefront of an effort by the Philippine defense establishment to counter what it sees as Chinese encroachment on Philippine territory. He warned against Beijing being allowed to take over a shuttered shipyard at a former American naval base in Subic Bay, which he said could be converted into a listening post for the Chinese.

The Philippine foreign minister, Teodoro Locsin Jr., said Thursday on Twitter that he had filed a formal diplomatic protest against China. Senator Risa Hontiveros, one of Mr. Duterte’s most vocal critics, called for the government to immediately recall its ambassador and consuls from China.

“The sinking of our ship mirrors the state of Philippine sovereignty,” Ms. Hontiveros said. “President Duterte’s continued subservience to China can no longer hold the country’s sinking sovereignty afloat.”