Race to save trapped ‘rat-hole’ miners 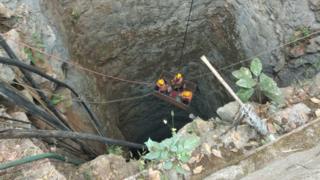 Rescuers in India say they are hoping for a miracle to save 15 workers trapped inside a flooded coal mine in the north-eastern state of Meghalaya.

The men were trapped 11 days ago when sudden flooding blocked their exit. Officials hope they have found an air pocket in the main shaft to survive.

Rescuers have been trying to drain the mine but have just two pumps and have asked for more resources.

So-called “rat-hole” coal mining is widespread in the state, but illegal.

Such mining involves digging pits into the ground to create a narrow hole to find coal. The trapped workers were inside one such mine in East Jaintia district.

“We are optimistic that the miners have found an air pocket [a dry area] in the main shaft, it will give us more time to reach them,” Santosh Singh from the National Disaster Response Force (NDRF) said.

District authorities have asked the state government to provide better pumps to drain the shaft. Experts say the 370ft deep mine was particularly vulnerable to flooding since it was near a river.

Most “rat-hole” miners are migrant labourers who come from neighbouring states to earn money.

A complete ban on rat-hole mining was announced in 2014. Mine owners have since challenged the ban and some of their petitions are still pending in the Supreme Court.

But the incident has highlighted that illegal coal mining continues to be rampant in the state.

The state’s chief minister, Congrad Sangma, admitted to illegal mining in the area on Friday. “We are doing all that we can to save the miners,” he told reporters, adding that this practice “was not acceptable”.

Many in the district, which is rich in minerals and coal reserves, either directly or indirectly depend on such mines to earn money.

India is the world’s third largest coal-producing nation and coal provides 60% of the country’s energy needs, but the industry is poorly regulated.

Workers, who are often faced with life-threatening situations, have little protection from health hazards.