State media did not identify the weapon, and the test did not appear to violate the voluntary moratorium North Korea imposed on nuclear and long-range ballistic missile tests this year. Still, Mr. Kim’s renewed activities at weapons test sites could complicate the already stalled talks between North Korea and the United States over how to remove the North’s nuclear weapons.

North Korea tends to use the prospects of rising tensions on the Korean Peninsula as leverage when negotiations with Washington do not go in its favor. In recent weeks, it has issued vague threats that it might resume testing nuclear weapons and ballistic missiles should the United States continue to refuse to make concessions like easing sanctions.

“After seeing the power of the tactical weapon, Supreme Leader Kim Jong-un was so excited to say that another great work was done by the defense scientists and munitions industrial workers to increase the defense capability of the country,” the news agency reported.

The South Korean daily newspaper Chosun Ilbo on Friday quoted anonymous government sources as saying that North Korea had tested multiple-rocket launchers this month. Besides the North’s nuclear weapons, such rockets are considered one of the greatest military threats against South Korea because the North deploys them near the inter-Korean border to target the South’s capital, Seoul, a city of 10 million people.

Recent satellite images have also revealed that North Korea has built what analysts believe may be a replica of the headquarters of the South Korean military for possible target practice. 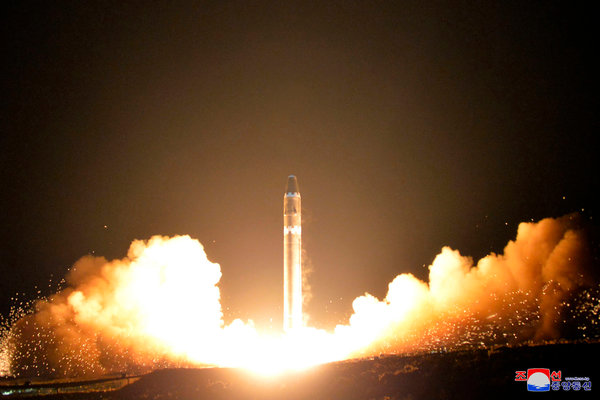 Many Western experts still doubt that North Korea has mastered all the technologies needed to deliver a small nuclear warhead on such missiles. Still, following the November test, Mr. Kim said his country no longer needed to conduct nuclear and long-range missile tests because it had achieved the capability to hit the United States with nuclear missiles.

In a ruling Workers’ Party meeting in April, Mr. Kim also retired his byungjin, or “parallel advance,” policy of simultaneously pursuing economic growth and nuclear weapons development. He said he would focus on rebuilding the economy.

He has since met President Moon Jae-in of South Korea three times to discuss easing tensions on the Korean Peninsula. He also met with President Trump in Singapore in June and made a vague promise to “work toward the complete denuclearization” of the peninsula. North Korea has closed its only known underground nuclear test site and agreed to dismantle some missile-test facilities.

But the Singapore agreement was short on specifics, and subsequent negotiations on carrying it out have since stalled.

North Korea has pledged to dismantle its Yongbyon nuclear complex, a center for producing nuclear bomb fuel, and take other actions, but will do so only if Washington takes “corresponding” steps, like easing sanctions and signing a peace declaration. It has also expressed anger in recent days at South Korea’s resumption of small-scale military drills with the United States.

But Washington demands that North Korea take more important steps first, like declaring all its nuclear-related facilities for inspection. Skeptics in Washington accused North Korea of giving up just enough to create the illusion of progress while enabling Mr. Trump to claim victory.

Despite Mr. Kim’s much-touted summit meetings with regional leaders, his country has never abandoned his repeated instructions to “mass-produce” its nuclear warheads and delivery missiles. In a report published this week, the Washington-based think tank Center for Strategic and International Studies said it located more than a dozen North Korean missile bases.

Although both Seoul and Washington said the missile bases have long been under the close monitoring of their military intelligence officials, the report was a fresh reminder that North Korea’s missile threat remained intact despite Mr. Trump’s repeated claims of progress in efforts to denuclearize the North. A series of United Nations Security Council resolutions ban North Korea from developing and testing ballistic missiles.