Home » Asia » Is India waging a ‘war’ on Islamic names?

Is India waging a ‘war’ on Islamic names? 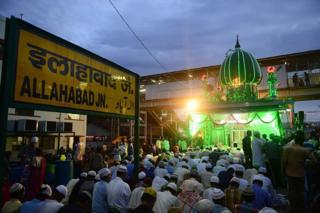 What’s in a name? For India’s cities and villages, seemingly plenty.

More than 100 of them, including the most prominent, have been renamed since Independence – Bombay to Mumbai, Calcutta to Kolkata, Madras to Chennai.

Names mangled by British rulers have been corrected, and colonial names rejected.

Identity pride, cultural assertion, linguistic nationalism and plain whimsy have all led to renaming in the past. And now, to appease its Hindu nationalist base, Narendra Modi’s ruling BJP appears to have embarked on a new renaming frenzy.

It began in July with the renaming of Mughalsarai, an iconic British-era railway station in the BJP-ruled state of Uttar Pradesh, after its ideologue Deendayal Upadhyaya.

Last month, the city of Allahabad in the same state was renamed Prayagraj, apparently to restore the city’s ancient identity as a major Hindu pilgrimage centre. (The city is located at the confluence of three holy rivers.) More significantly, BJP leaders were peeved by the fact that the city’s 435-year-old name was given by a Muslim ruler.

As if that was not enough, the local government, led by a controversial Hindu religious leader, has changed the name of Faizabad district to Ayodhya, best known as the birthplace of the Hindu god Ram.

It was in Ayodhya that hardline Hindu mobs razed an ancient mosque in 1992, sparking one of the worst episodes of religious violence in which nearly 2,000 people were killed across the country.

Now BJP leaders want to give more Hindu-friendly names to the city of Agra in Uttar Pradesh, home to the iconic Taj Mahal, and to Ahmedabad in the western state of Gujarat. Earlier this year, BJP-ruled Rajasthan changed the “Islamic-sounding names” of three villages.

The new names heap glory on what the BJP calls India’s “glorious” Hindu past, and pour scorn on its Islamic heritage. With general elections barely a year ago, the renaming is seen by critics of Mr Modi as a blow to India’s fabled syncretism – the merging of different faiths and cultures.

Gaganpreet Singh, who teaches at Delhi University, says the politics of renaming in India is often “rooted in the nationalisation of heritage”.

“This was the BJP replacing the name of a Muslim villain with a Muslim patriot,” remarked Aatish Taseer, author and columnist.

It is difficult to see why India’s majority Hindus should be feeling besieged by a lack of representation, or why the BJP sees them as a persecuted majority. More than 7,000 of India’s 677,000 villages are named, for example, after Ram and Krishna, two popular deities. Mughal king Akbar, by comparison, had barely 234 villages in his name.

The renaming of cities and places goes on elsewhere in the world for a variety of reasons, some of them similar to India’s.

But critics say erasing Islamic names is another way to disempower India’s Muslims and deny them a stake in the country’s history.

They compare it to what has happened in neighbouring Pakistan, where most roads and spaces have been renamed to be associated with Muslim heroes or personalities. History, as historian Irfan Habib says, is always the “first victim of politics”.

With crucial general elections barely five months away, the BJP’s name-changing moves can be seen as an attempt to woo voters. A home ministry official told parliament in March that it had received 27 proposals from different states requesting a change of names for various villages, towns and railway stations. Most of the requests had came from the BJP-ruled states of Rajasthan and Haryana.

But there’s no evidence that renaming places draws more votes for the party pushing the purge. There have been no recent agitations for name changes, and no great relief among people that they are happening.

“In the absence of broader improvements in actual welfare, name-changing also gives a sense of things changing,” sociologist Sanjay Srivastava told me.

“I am not sure who cares. It doesn’t appear to be a vote-winning issue. Except that it consolidates the BJP’s image as ‘decisive’ across all spheres. It is really the politics of spectacle.”