Tigress run over with tractor in revenge for man’s death two days after another tigress was shot by forest officials. 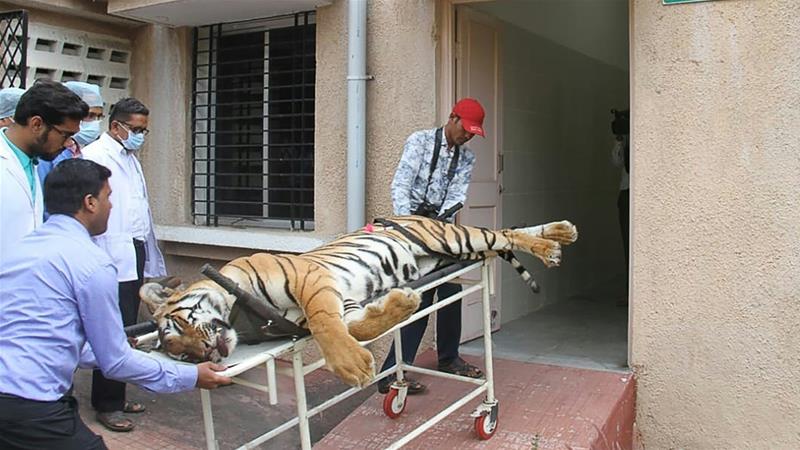 Villagers in northern India beat and crushed a tigress to death with a tractor after the feline killed a man, forest officials said.

The incident came days after forest officials shot dead another tigress known as Avni, which was believed to have killed 13 people in the last two years in western India.

In the latest killing on Sunday, 300 angry villagers marched to the heart of the Dudhwa Tiger Reserve in the northern state of Uttar Pradesh, beat up the forest guards and attacked the tigress with iron rods, spears and axes, forest official Mahavir Kaujlagi said.

The violent act was retribution after the mauling of a man in the park late on Sunday evening while the villagers claim that another man was attacked by the tigress a fortnight ago.

“The irate villagers beat her mercilessly and later crushed her to death using a tractor,” Kaujlagi said.

A case has been registered under the Wildlife Protection Act and since the tiger is India’s national animal, arrests will be made soon, he said.

The village of Chaltua is located near the centre of the reserve. Residents have refused to be relocated, despite efforts by the forest department after authorities warned of the danger humans face from the wild animals.

Indians have taken to social media to protest the latest killings which they say highlight the increased human-animal conflict in several parts of the country.

The protests have followed wildlife activists’ outcry against the forest department after Avni’s earlier killing on Friday.

They had campaigned to capture the tigress instead of killing her and avoid leaving her two cubs orphaned.

India’s Supreme Court had responded that it would not interfere if forest rangers were forced to shoot the animal.

“The greatness of a nation can be judged by the way its animals are treated,” opposition politician Rahul Gandhi wrote on Twitter, quoting India’s activist and freedom hero Mahatma Gandhi.

India is home to the world’s largest number of tigers in the wild.

In the last count in 2014, they were estimated to number 2,226, according to India’s National Tiger Conservation Authority.