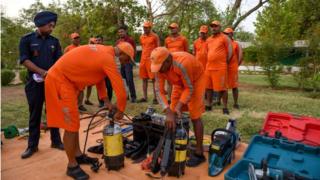 Hundreds of thousands of people have been evacuated along parts of India’s eastern coast as the region braces itself for a powerful cyclone.

Cyclone Vayu, which has been classified as “very severe”, is expected to make landfall early on Thursday.

Schools and colleges in Gujarat state and Union Territory of Daman and Diu will remain closed until 13 June.

The port at the Gulf of Cambay in Gujarat has suspended all operations.

The National Disaster Response Force (NDRF) has deployed teams along the coastal areas of Saurashtra and Kutch for rescue and relief work.

Prime Minister Narendra Modi has tweeted wishing for the safety of those who are in the path of the storm.

This is expected to be worst cyclone to hit the state since 1998, when a deadly storm killed some 10,000 people.

A powerful cyclone ravaged the eastern state of Orissa in May.

Nearly 80 people were killed but officials said the preparations and emergency response saved many lives.