HONG KONG — The police in Hong Kong arrested a prizewinning journalist on Tuesday whose work had exposed the authorities’ delayed response to a mob attack on antigovernment protesters last year, intensifying concerns about a crackdown on press freedom in the semiautonomous Chinese city.

The journalist, Choy Yuk-ling, who also goes by the name Bao Choy, is a producer for Radio Television Hong Kong, or RTHK, a public broadcaster. The network’s news programs have attracted official criticism for investigations into the Hong Kong police, who have been accused of using excessive force against the protesters and turning a blind eye to assaults on them.

Ms. Choy worked on some of the most notable inquiries into police conduct, including a prizewinning episode of the program “Hong Kong Connection” that examined the slow response by officers to a mob attack on a group of protesters and commuters in a train station on July 21, 2019.

Ms. Choy, who is employed by RTHK on a freelance contract, was arrested on Tuesday afternoon.

The police said they arrested Ms. Choy for making a false statement about why she was obtaining license information from a publicly accessible database. Such offenses could be punishable with fines of $645 and six months’ imprisonment.

In an investigative documentary that aired in July, one year after the mob attack, RTHK journalists looked up the license plates of vehicles caught on video transporting the suspected assailants and traced them to community leaders in the territory’s outlying villages.

Hong Kong’s traditionally freewheeling news outlets have met with increased difficulties in recent years, including a loss of advertising from companies afraid to anger China and reporters arrested and attacked with pepper spray while covering last year’s protests. A new national security law imposed by Beijing at the end of June has compounded the risks for journalists, stifling reporting on potentially sensitive subjects. 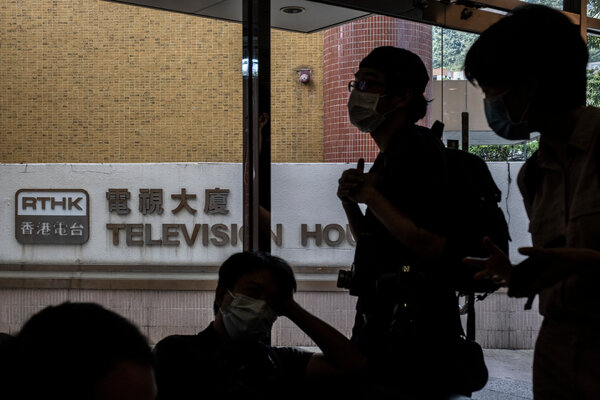 Foreign news outlets in the city have also faced obstacles, including difficulty renewing visas for journalists. The New York Times said in July that it would move some of its operations from Hong Kong to Seoul, South Korea, citing visa delays and uncertainties created by the security law.

RTHK, which is a government department staffed in part by civil servants, has been under growing pressure from establishment lawmakers and pro-Beijing groups to curb its aggressive reporting, particularly about other government agencies.

The Hong Kong Police Force faced widespread criticism after protesters accused them of ignoring calls for help during the train station attack in the Yuen Long district. At least 45 people were injured when men carrying sticks and metal bars set upon commuters and protesters inside the station and aboard a subway train.

More than a year later, the police have moved to decisively change the narrative about the assault. In August, the police arrested a lawmaker who filmed the attack and was wounded during it. The police also said in August that it had taken them 18 minutes to arrive on the scene after receiving emergency calls and not 39 minutes as they had previously said.

RTHK’s investigation into the station attack was just part of its work that has received scrutiny. This year the broadcaster suspended “Headliner,” a long running satirical show that frequently mocked the police. It also reopened an internal investigation into complaints about Nabela Qoser, a journalist well known for her pointed questions to government officials.

The government began a formal review into the RTHK’s operations in July after the broadcaster ran in April an interview with a World Health Organization official, Dr. Bruce Aylward, who was asked whether Taiwan should be allowed to participate in the global health body.

Taiwan, a self-ruled island that China considers part of its territory, had been excluded from the health organization because of pressure from Beijing. Hong Kong’s secretary for commerce and economic development, which supervises RTHK, accused the broadcaster of having breached China’s official stance toward Taiwan.

Next year's Chinese New Year Bazaar at Chinatown called off