HONG KONG (Reuters) -The Hong Kong Monetary Authority (HKMA) on Thursday raised its base rate charged through the overnight discount window by 75 basis points to 2.75%, hours after the U.S. Federal Reserve delivered a rate hike of the same margin.

Hong Kong’s monetary policy moves in lock-step with the United States’ as the city’s currency is pegged to the greenback in a tight range of 7.75-7.85 per dollar.

HKMA chief executive Eddie Yue said he expects the city’s overnight and one-month interbank rate, as well as short-term rates, to accelerate at a much faster pace.

“This will help offset the incentives for carry trade and stabilise the Hong Kong dollar within the 7.75 and 7.85 range,” he added, referring to the tight band of the city’s peg to the U.S. dollar.

Hong Kong private home prices fell at a faster pace in June and dropped to the lowest since December 2020, official data showed on Wednesday, as homebuyers stayed on the sidelines due to an uncertain outlook.

One month Hibor [HIHKD1MD=] – the Hong Kong Interbank Offered Rate, a benchmark used for pricing mortgages – last week rose to its highest since May 2020.

The Federal Reserve raised the benchmark overnight interest rate by three-quarters of a percentage point. The move came on top of a 75 basis point hike last month and smaller moves in May and March, as the Fed stepped up efforts to cool inflation.

Fed Chairman Jerome Powell told a news conference following the rate announcement that he did not believe the U.S. economy is currently in a recession but that it is softening. 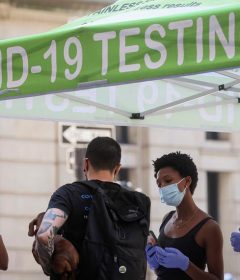