Home » Asia » He Killed 2 Marines in 2011. It Almost Derailed Peace Talks This Month.

KABUL, Afghanistan — When a young Afghan police officer killed two American Marines in southern Afghanistan in 2011, he was acting out of his own outrage rather than taking orders from the Taliban, according to his family and closest friends.

Still, the insurgents lobbied hard to secure the release of the former officer, Mohammad Dawood, 31, from an Afghan prison, even as American officials were privately digging in to keep him detained. He became one of just six prisoners — out of 5,000 released by the Afghan government in total — over whom a bitter disagreement almost derailed historic peace talks that opened this month between the government and the insurgency, but whose names had not been publicly released.

At the time Mr. Dawood opened fire, insider attacks by Afghans against their American and NATO allies were rising to a crisis point that would change the war. It was that sensitivity that led American officials to push to keep him in prison — even as they urged the Afghan government to release thousands of Taliban prisoners with Afghan blood on their hands. France and Australia, too, lobbied against the release of men who had killed their citizens.

Only a last-minute deal to remand the six to a kind of house arrest in Qatar allowed the opening of peace talks on Sept. 12.

Mr. Dawood’s case, detailed in several interviews with The New York Times, and with his identity confirmed by American and Afghan officials, stands as a demonstration of the difficulty — and tough choices — involved in trying to make peace in the middle of a bitter war. Taliban negotiators were willing to go to the brink to secure the release of an attacker who was not even one of their own, but whose attack furthered their goal of taking the fight to American and NATO forces.

Mr. Dawood’s killings of Lt. Col. Benjamin Palmer and Sgt. Kevin Balduf in 2011 represent only a fraction of more than 40 years of violence. But now the Afghan government and the Taliban, both parties with vastly different views of what the future of Afghanistan entails, will try to shape how the war might end.

The Taliban have consistently made prisoner releases a priority — most notably in the 2014 exchange of an American soldier held by the Taliban for five years, Sgt. Bowe Bergdahl, for five senior Taliban figures who were being held at the Guantánamo Bay prison camp. That deal brought heavy criticism for the Obama administration, and during his campaign for the presidency in 2016, Donald Trump repeatedly called Sergeant Bergdahl a traitor who should be executed.

Both Mr. Khalilzad as well as Mutlaq al-Qahtani, the Qatari special envoy for the process, refused to discuss details of the arrangement regarding the six prisoners, including where in Qatar the men are being held and under what circumstances. Amrullah Saleh, Afghanistan’s vice president, in a recent interview said the men would not be allowed to leave Qatar — all the pages on their passports are crossed out except for the one with the Qatari visa. 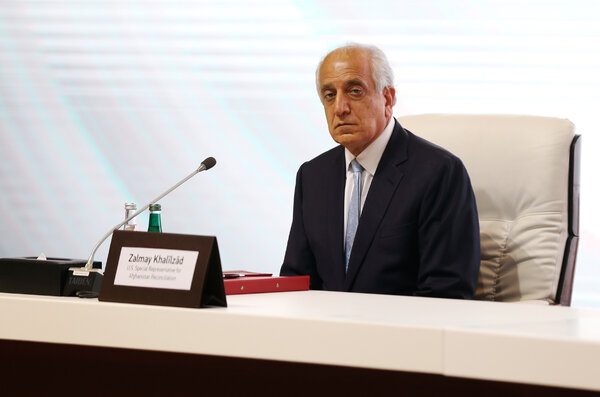 Stopping deadly insider attacks like the one by Mr. Dawood was once an urgent imperative for the Obama administration. By the end of President Barack Obama’s first term, cultural tensions and increasing pressure from the Taliban had spilled over into violence as Afghan troops turned their guns on their Western allies, threatening to derail the war effort.

By the height of the war, Americans were building outposts within outposts to defend themselves from the very people they were supposed to be training and fighting alongside.

Insider attacks became a grim feature of the conflict. The deaths of Colonel Palmer, 43, and Sergeant Balduf, 27, came during a flurry of such killings that peaked in 2012, accounting for 15 percent of coalition troops who were killed or wounded in Afghanistan that year.

Of the four American troops killed in combat in 2020, two were killed in an insider attack in February, marking the last American troops to die from hostile fire before the peace agreement between the United States and the Taliban.

But as was the case for many such attacks, Mr. Dawood was not a part of an insurgent group when he killed the two Marines, according to those close to him and to an Afghan official familiar with his case.

Born in Naw Bahar, a small, staunchly anti-Taliban village in Baghlan Province, Mr. Dawood was one of five brothers and the son of Mohammad Zahir, a poor wheat farmer. He studied at a madrasa in Kunduz and Baghlan, before studying in Pakistan and Iran, where like many Afghans he worked for a brief time.

Safdar Mohseni, head of the Baghlan provincial council, said Mr. Dawood had most likely turned to the Taliban in prison, looking for support.

After returning from Iran, Mr. Dawood was engaged to be married, but since he was low on money, he joined the Afghan police. He trained in Kabul for six months in 2010, and graduated as a sergeant, according to a senior police official who served alongside him in southern Afghanistan.

Not long after Mr. Dawood left police training in 2011, he was assigned to the Afghan National Civil Order Police’s Fifth Brigade, a new unit the American military was training in Afghanistan’s volatile Helmand Province. As the Taliban began regaining ground, U.S. and NATO forces started a concerted effort to professionalize the police to hold what districts the Afghan government still controlled.

On May 12, 2011, Mr. Dawood walked from the Afghan portion of his base in Lashkar Gah, the provincial capital of Helmand, and entered the American side, where his Marine advisers lived, slept and ate.

Cultural misunderstandings and disgust with Westerners were traced to many insider killings. When the attacks began in earnest in 2008, they took a deep toll on the Amerian-Afghan relationship, sowing doubt and distrust that was only exacerbated by the stress of training and combat.

In a country rife with anti-Semitism, Mr. Dawood appeared to turn to that in an attempt to justify his actions. He told investigators he killed the Americans because he thought they were Jews and he did not want to live among them. He said no one had provoked him, though the senior Afghan official said that Mr. Dawood’s fundamentalist education in Iran and Pakistan was probably a catalyst for this contempt.