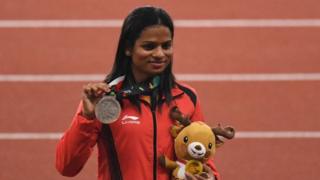 Dutee Chand, India’s first openly gay athlete, is facing a barrage of criticism from her family after announcing she was in a same-sex relationship.

The sprinter, 23, came out last month, revealing her “soulmate” was a 19-year-old woman from her village.

India’s historic decision to decriminalise gay sex in 2018 inspired her decision, she said.

But since publicly coming out, her family have reacted with hostility.

Her mother and father, Akhuji and Chakradhar Chand, have not accepted their daughter’s wish to “settle down” with her partner.

Mr Chand has called their relationship “immoral and unethical”, telling the Times of India: “She has destroyed the reputation of our village.”

Speaking to the Indian Express last month, Mrs Chand said she would not allow her daughter to marry her partner of five years, who is from their village, Chaka Gopalpur, in Odisha’s Jajpur district.

“We belong to a traditional Odia weaver community which does not permit such things. How can we face our relatives and the society? I am with her as long as she is with sports not beyond that,” she said.

On Wednesday, Ms Chand appeared to address her family’s remarks on Twitter.

She tweeted comments from an interview, in which she said she hasn’t “paid attention” to “negative” family members.

Everyone won't be positive, but some of my family and fans have been supportive and said, "Your life is yours." So, I haven't paid attention to the rest. https://t.co/SBFJT21BX3

Same-sex relationships remain taboo in India. Yet, the country’s decriminalisation of gay sex in 2018 was considered a sign of shifting attitudes.

Ms Chand was praised for coming out, with prominent Indian LGBT rights activist Harish Iyer saying she has “paved the path” for other gay athletes.

Given her family’s traditional values, however, Ms Chand said she is unsure whether they will “come round”.

There are concerns for her safety, too. Last month, a 19-year-old lesbian woman from Odisha was reportedly attacked by locals after they found her in bed with her girlfriend.

In interviews with Indian media, however, Ms Chand does not seem fazed.

“Freedom of choice and freedom to love are my inalienable rights and I shall exercise it,” she told the Times of India.

Ms Chand was the first Indian sprinter to reach a final at a global athletics event, the World Youth Championships in 2013.

In 2014, she was banned from competing by the Athletics Federation of India after failing a hormone test which found she had unusually high testosterone levels, a condition known as “hyperandrogenism”.

Ms Chand’s legal team successfully argued the ruling was discriminatory and flawed at a hearing in March 2015.

The following year she qualified for the 2016 Rio Olympics and in 2018 she won two silver medals at the Asian Games.

She currently holds the women’s 100-metre sprint record in India.