MOSCOW — A long-simmering territorial dispute in the Caucasus region that reignited in recent days, with tanks, artillery helicopters and infantry engaged in combat, suggests that the two sides — Azerbaijan and Armenia — are girding for an extended conflict rather than the border skirmishes that they have engaged in over the years.

And what would seem to be a local war over a mountainous land of little strategic value is taking on greater importance because of its potential to draw in bigger powers like Russia and Turkey.

The fighting over the territory, known as the Nagorno-Karabakh enclave, escalated on Monday after breaking out over the weekend, with reports on both sides of rising numbers of wounded and dead.

The seemingly intractable tensions have their origins in the Soviet collapse 30 years ago when Karabakh, a predominantly ethnic Armenian enclave inside Azerbaijan, declared independence. Azerbaijan still claims the territory, and Armenia backs the enclave.

Russia has a mutual defense agreement with Armenia that would take effect if the fighting were to spread to Armenia proper, and Armenia has reported some shelling on its territory.

Turkey, a NATO member, is allied with Azerbaijan. On Monday, a national security adviser to President Recep Tayyip Erdogan of Turkey released a statement condemning Armenia. “We believe this conflict can be resolved through peaceful negotiations, but the Armenian side has shown no interest so far,” the statement said.

Urging Armenia to “stop violating international law,” the statement added: “We will continue to stand by the people of Azerbaijan and the government of Azerbaijan against any kind of aggression by Armenia or any other country.”

Over the years, the major powers — particularly Russia, which supplies the militaries of both sides and helps lead an international peace effort called the Minsk Process — have intervened to quell flare-ups.

Distracted by other issues like the pandemic, however — and a popular uprising in Belarus, another former Soviet state — international mediators missed warning signs in the Caucasus conflict, analysts say. Foreign leaders have since called for a quick cease-fire, but both sides seem to be settling in for a long fight. 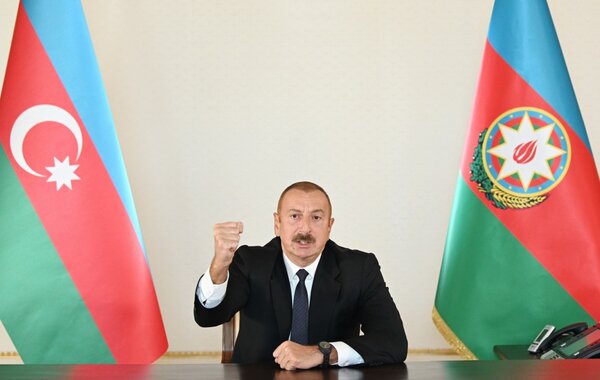 Azerbaijan’s president, Ilham Aliyev, ordered a partial mobilization of reserves and the country’s military on Monday, in the clearest terms yet stated a goal of seizing territory. Armenia had earlier called up reserves.

The international airport in Baku, the Azerbaijani capital, canceled flights on Monday, while the authorities in Armenia announced a counteroffensive and said that fighting had intensified.

How the fighting began on Sunday morning is contested. Azerbaijan says Armenia fired artillery across the border, while Armenia says the conflict was unprovoked.

Azerbaijan’s military issued a statement on Monday saying that its objectives were to shift the status quo by seizing territory from the enclave. “Azerbaijani units carry out combat operations to destroy the enemy and liberate our occupied lands,” the statement said.

President Aliyev had said on Sunday that his military intended to target only the enclave, not Armenia.

The authorities in the Karabakh government, which is not recognized by other countries, said on Monday that they had recaptured lost positions in fighting overnight.

Both sides have offered high estimates for the others’ casualties, though these are typically exaggerated. Azerbaijan said it had killed 500 Armenian soldiers, while Armenia said it had killed 200 Azerbaijani soldiers. Karabakh’s military released a more credible figure of 16 dead.

A previous bout of fighting in the area in 2016 killed about 200 soldiers on both sides, but quickly ended in a settlement negotiated by Russia.

Regional analysts have raised concerns about a small but real possibility that other countries could be drawn into the conflict. A war in Nagorno-Karabakh that ended in a cease-fire in 1994 was among the most vicious of the early post-Soviet conflicts. Three states — Russia, the United States and France — agreed to mediate the truce in the Minsk Process.