SINGAPORE – Food and beverage outlets are implementing the new dine-in regulations from Monday (July 19) in their own way.

Until Aug 8, unvaccinated people without valid negative Covid-19 test results can dine out only alone or in pairs. But those who are fully vaccinated can be in groups of up to five.

Those who have recovered from Covid-19 and unvaccinated individuals with a negative pre-event test result within 24 hours can also join such bigger groups.

Members of the same household can dine out with unvaccinated children aged 12 or below. But if they are from different households, children cannot make up more than half the group.

With the onus falling on F&B operators to do the checking, many are setting their own policies.

Mr Tan Ken Loon, who owns upmarket seafood restaurant Naked Finn, said these have been the most confusing rules imposed by the Government during the pandemic.

He has informed customers in groups of more than two to send their official vaccination certificate via WhatsApp before the table can be confirmed. They also have to turn up with their identity card to verify their identities.

“As for the same household split-table and the mathematical approach to children, we are not accepting (such groups),” he added. “Making restaurants police these rules without giving us the authority to access this sensitive information makes it so hard.”

He suggested that for vaccinated people, the authorities come up with a simple digital certificate with the last four digits of their identity card that restaurants can access.

Other restaurants said they will be checking the vaccination status of customers at the door through the HealthHub and TraceTogether apps on their smartphones. Printed vaccination certificates are accepted too. They remind customers of this beforehand over the telephone or via e-mail.

Said restaurateur Loh Lik Peng from the Unlisted Collection: “The questions are quite intrusive and it means more work for the staff. But we just have to get on with it. Fortunately, most customers are compliant and volunteer the information.”

He added that he did not have problems on the first day of the new rules at any of his restaurants, which include Basque Kitchen by Aitor, Majestic Restaurant and Meatsmith.

As for checking if the children accompanied by an adult are from the same household, he said there would need to be an element of trust. “We cannot ask them to bring their birth certificates, but fortunately, we do not foresee that problem as we do not usually have that kind of configuration in our restaurants.”

Mr Beppe de Vito, who owns the ilLido Group, did not anticipate a high demand for groups of five people at his high-end Italian restaurants such as Braci, Art and Gemma. He said: “People don’t want to embarrass themselves asking if their dining companions are vaccinated or recovered from Covid-19.”

Many cancelled their bookings instead, he added.

Mr Puneet Agarwal, chief executive of Eclectique F&B Concepts, said the company has prepared a pre-event testing protocol for customers to get tested at its restaurants, which include Shabestan, Permata Singapore and Cuba Libre. As for children, only two are allowed at each table.

Plain Vanilla cafe in Tiong Bahru has imposed a policy of not letting any unvaccinated customers sit indoors. Mr Max Klemans, 30, a customer director from The Netherlands, said he was asked by the staff there on Monday morning about his vaccination status. He has received only one jab and was told to sit outside, and he did.

Publicist Yeow Yin Peh, 41, who is also waiting for her second jab, had 15 restaurant reservations with friends and for work meetings affected by the new rules. She is cancelling five of them, but will go for a pre-event test at her regular family clinic for the rest. 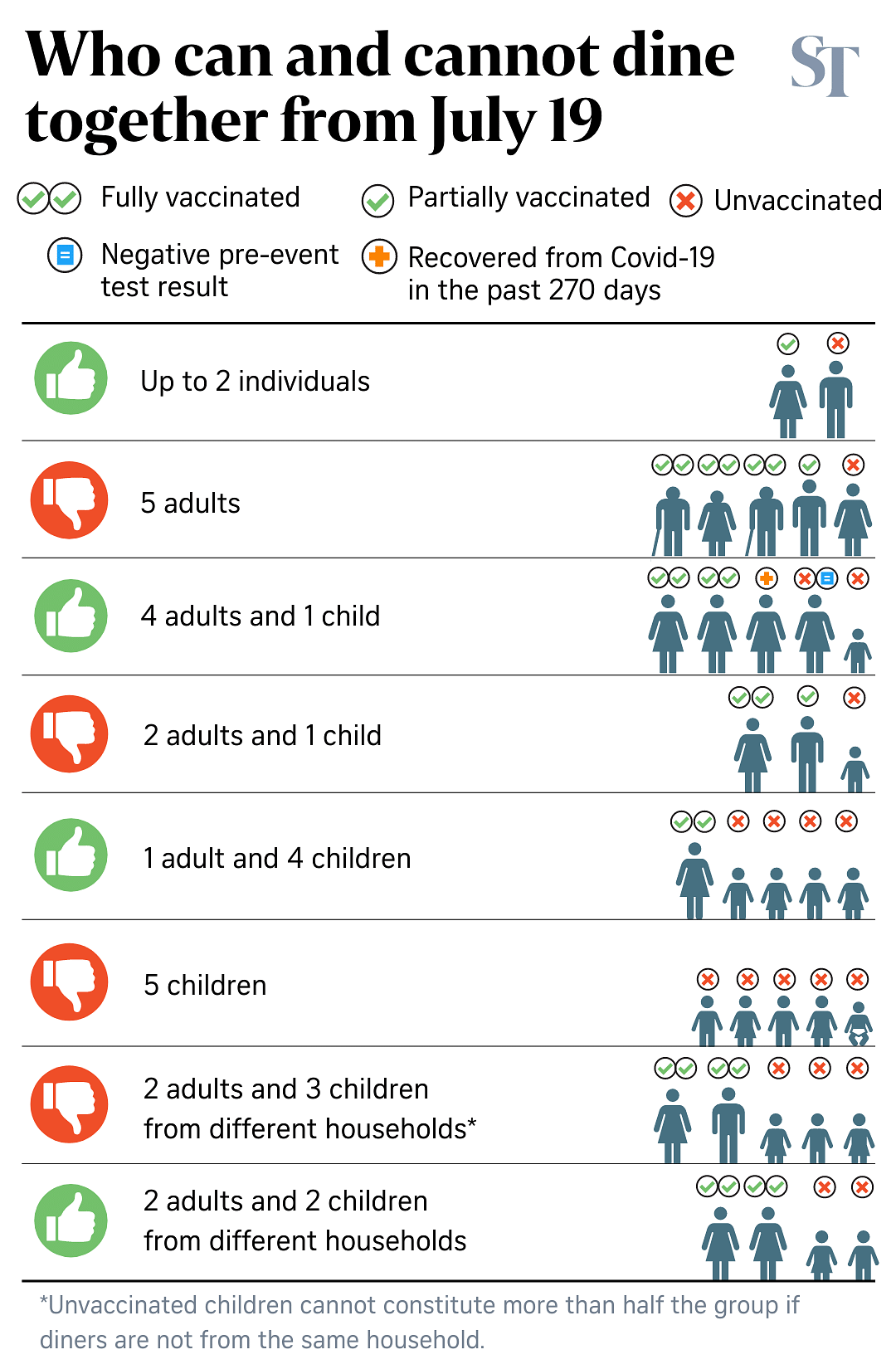