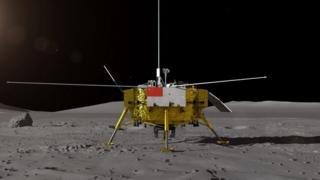 Chinese state media and internet users are celebrating the Chang’e-4 probe landing on the far side of the Moon, calling it “a major milestone in space exploration”, and comparing it favourably to past American and Russian missions.

State broadcaster China Central Television (CCTV) aired video simulations of the landing a couple of hours after it took place.

Close-up pictures taken by the probe and relayed by the Queqiao (Magpie Bridge) satellite “lifted the ancient mysterious veil” of the far side, the broadcaster said.

‘Dream of a shared destiny’

The mission was cast very much as an achievement for the world, not just China.

“The mission achieved humanity’s first soft landing of a probe and the first relay communication between the Moon and Earth, opening a new chapter in human lunar exploration,” CCTV said.

The nationalist Global Times newspaper contrasted the “open and cooperative” nature of China’s space mission with the US’ Apollo and Soviet Union’s lunar missions, which it described as driven by a “struggle for hegemony”.

China’s lunar exploration mission “has always harboured the dream of a human community of shared destiny”, it said.

“Since the start of our lunar exploration mission, all of our images and data have been presented openly to the international community and used by scientists worldwide,” it added.

News of the landing also generated some speculation internationally on Twitter, after some journalists and scientists noticed that two state media outlets – the China Daily newspaper and the broadcaster CGTN – deleted tweets confirming that the landing had been a success.

The reason for the deletions is unclear but both outlets later released new tweets on the story, similar to the deleted ones, with only the time of the landing added.

Twitter is largely blocked in China but the topic was also discussed by a few Chinese users on Sina Weibo, China’s equivalent of Twitter, which is tightly moderated.

“China Daily and CGTN are both reporting the success of Chang’e-4 on Twitter. But there is no news at all from Xinhua back home,” one user noted.

Most users, however – numbering in the millions – expressed congratulations and pride in their country’s achievements on Sina Weibo.

Not quite most popular

On Sina Weibo, the hashtag “Chang’e-4 lands on far side of the moon” was also pinned as an alternating top theme for the day on the platform’s “hot search” list, along with news of China’s new e-commerce law.

A number of users strongly criticised Sina Weibo for not giving the landing sole top billing.

“Can’t this be the top hot search item? Our country is too amazing!” demanded one Weibo user.