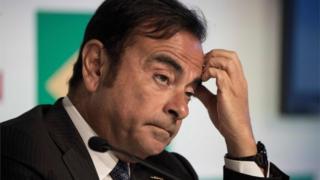 Japan’s former chief prosecutor was, until he unexpectedly resigned on Wednesday, his lawyer, and has declared Mr Ghosn to be a victim of “hostage justice”.

It is a term few outside Japan will have heard of until now, but what does it mean?

Living in Japan it’s easy to become complacent about crime – there is so little of it. Japan’s incredibly low crime rate is often attributed to a homogeneous culture, small income gap and full employment, but it’s also true to say that many people are just terrified of being arrested.

I got my first inkling of why in 2014 when an artist I knew, Megumi Igarashi, was arrested for distributing “obscene material”. Igarashi had made a digital scan of her own genitals, and used that model to make items such as key fobs and a large yellow kayak.

Most people thought it hilarious and she was dubbed the “vagina artist”. But Tokyo prosecutors were not amused. They held her incommunicado for three weeks.

“Why on Earth would they hold her for three weeks over something so silly?” I asked a friend.

“Because they can,” she responded.

In Britain, only terror suspects can be held without charge for 14 days – and that is controversial. In Japan a shoplifter can be held for 23 days.

The pressure to confess

“The Japanese criminal justice system is focused on interrogation. The aim is getting a confession,” explains Nobuo Gohara, who spent 23 years in the prosecutor’s office before resigning. He now works in private practice and campaigns for reform of Japan’s justice system.

“A suspect who admits to the crime is released from imprisonment,” Mr Gohara tells me. “But if a person refuses to admit to a crime, the prosecutor’s office will strongly oppose release until the suspect makes a confession.”

That is what happened to Tomohiro Ishikawa. In 2010, the then sitting MP was arrested and accused of taking bribes. For three weeks he was held in a tiny unheated cell. Each day he was interrogated for 12 hours without a lawyer present. He eventually admitted to a lesser offence and nearly 10 years later he is still bitter.

“Japanese prosecutors are very persistent,” he told me. “They write the plot out before they make the arrest.”

“Then they force you to confess according to their storyline. In my interrogation they didn’t write down what I had said. [Instead] they would show me what they had prepared beforehand then demand I sign it. Many times, I told them I would not sign, because it [the statement] was not what I had said.”

“Sometimes they shouted at me,” he said. “At one point the deputy chief prosecutor started crying, asking me why was I lying.”

This pressure to confess is even more worrying given that 89% of criminal convictions in Japan are based partly or wholly on confessions.

There are numerous examples of people spending years in prison for crimes they didn’t commit or where serious doubts have emerged because of apparently “unsafe” confessions.

A former professional boxer named Iwao Hakamada was sentenced to death for murder in 1968. His conviction was based on a confession he made under prolonged interrogation and later withdrew.

In 2014, after 46 years on death row, Mr Hakamada was released because his sentence was considered unsafe and there was no evidence to support the confession. At 82, he is still fighting to clear his name as he awaits a possible retrial.

The power of prosecutors

According to Mr Gohara, the root of the problem is the enormous power of prosecutors.

“While the top official at the Justice Ministry is ostensibly the administrative vice minister, in reality he is inferior both in terms of seniority and pay grade to the prosecutor general and several other top prosecutors and, unlike most other senior bureaucrats, their uppermost ranks are appointed through a process that involves attestation by the Emperor.”

This is the system the accused, like Carlos Ghosn, find themselves up against, where if you don’t confess you will be held longer and more serious charges will probably be laid against you. If prosecutors do file charges your chances of being found guilty stand at 99%.

“Officially there is presumption of innocence” says Mr Gohara. “But even if the suspect is not guilty, there is an advantage for them to admit to the crime. This is the most evil effect of Japan’s hostage justice system.”

After the first 23 days of detention the ordeal is not necessarily over. Prosecutors are permitted to re-arrest a suspect on a slightly different accusation, with approval from the courts. The clock is then reset and another 20 days of interrogation begin.

This is what happened to Carlos Ghosn, twice. In all he was held in interrogation for 53 days before being formally indicted.

No bail for Ghosn

In many countries, formal indictment would be the trigger for a suspect to be released on bail. But again, not in Japan – as Carlos Ghosn has found out.

In a recent interview with the French news agency AFP, Mr Ghosn said the refusal of the Tokyo court to grant him bail would “not be normal in any other democracy”. He accused the court of “punishing me before finding me guilty”.

Mr Ghosn has now been allowed to meet with family members – for 15 minutes a day, through a glass window.

Contrast his treatment with another recent high-profile arrest, this time in Canada. On 1 December last year, Chinese businesswoman Meng Wanzhou was arrested at Vancouver airport. Ms Meng is the chief financial officer of Chinese telecom giant Huawei. She is wanted in the United States, accused of conspiring to breach international sanctions against Iran.

Ten days after her arrest, on 11 December, Ms Meng was released on bail of 10 million Canadian dollars. She is now staying in one of her two Vancouver homes, and is obliged to wear an electronic ankle tag.

Japanese prosecutors point out there is no legal provision for keeping suspects under house arrest or compelling them to wear an electronic tag. But former detainee Tomohiro Ishikawa says he does not believe the courts’ refusal to grant bail is because it fears Mr Ghosn will flee.

“I think it would be very hard for someone like Mr Ghosn to hide. If he did (flee) his reputation would be destroyed. I think they are keeping him to harass him. They want his confession. They want him to admit he is guilty.”

Defenders of Japan’s system deny that confessions are behind the 99.9% conviction rate. They say it is because Japanese prosecutors indict at a much lower rate than in the US. In other words, they only indict when they are sure they can win. In 2015, the prosecution rate was 33.4%, official figures show.

The gatekeepers of justice

“By any objective measure, the misconduct alleged was less serious than the corporate misfeasance that is routinely overlooked in Japan,” he writes. “Nothing we know that [Mr] Ghosn allegedly did smells like a serious crime deserving prison.”

So why is the special investigation unit of the Tokyo prosecutor’s office pursuing this case so hard? Mr Ishikawa believes Mr Ghosn’s real crime, in the eyes of Japan’s prosecutorial elite, is greed. He was the first CEO in Japan to earn millions of dollars a year, and that changed Japanese corporate culture.

“The Tokyo prosecutor’s office… is driven by their belief that they are the gatekeepers of justice. In an era of economic inequality, they want to make their name as the ones who nailed the rich.”

As Mr Ghosn sits in his detention cell planning his strategy, he must know there is one more sting in the tail of Japan’s justice system – there is no double jeopardy.

If he beats the odds and is found innocent of the charges against him, the prosecutor’s office can appeal to the high court to have that verdict overturned. It is, say critics, one more reason so many Japanese criminal suspects confess.