Home » Asia » Can Delhi ever clean up its foul air?

Can Delhi ever clean up its foul air? 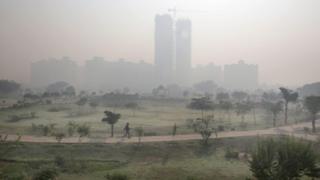 The anguish and outrage over Delhi’s rising air pollution has a sense of déjà vu all over again.

With the onset of what is still a feeble winter, the air quality in India’s capital has again become appalling. Particulate matter – particles so small they can be ingested deep into the lungs – and a toxic cocktail of nitrogen oxide, ozone, benzene, carbon monoxide and sulphur dioxide hangs heavy over the world’s most polluted city. People cough, wheeze and whinge and your correspondent is no exception.

With the worsening air quality, public outrage against it has spiked. Expats are worried again – there are reports of Norway considering classifying the city as a “hardship” posting on account of increasing air pollution – and an international school suspends outdoor activities. A court wonders whether Delhi has become a “gas chamber”.

Truth be told, the world’s fifth largest megacity has turned a “gas chamber” in winter for a long time now. We all know what is leading to Delhi’s foul air: diesel emissions, construction dust, brick kilns, burning of crop stubble in farms around the city.

We know that the city’s 8.5 million vehicles – Delhi adds 1,400 new vehicles to its congested streets every day – are the prime contributor to the pollution. Subsidies on the fuel mean that people are buying more diesel vehicles. An exhaustive 2012 study found a frightening number of the city’s children with impaired lung function. Hospital emergency wards receive a disproportionately high number of people suffering from respiratory distress during winter.

We know some 15 years ago, Delhi considerably cleaned up its air.

It moved polluting industries out of the city, introduced the world’s largest natural gas-based public transport programme, capped the age of operating commercial vehicles at 15 years, imposed strict emission standards – Euro 4 – and began building an efficient metro and some cycle tracks. There was an immediate improvement in air quality.

We also know that some eight years ago, it all began sliding back.

Delhi simply forgot the second-generation – and the more difficult – battle against air pollution. We even did a story last year on why Delhi is losing its clean air war.

Last winter, Delhi’s Centre for Science and Environment (CSE), which monitors air quality, found 12 “smog episodes” which lasted for more than three consecutive days in the city between October and December. This was when levels of PM2.5 particulates, which are the most hazardous to health, were consistently above 250 micrograms per cubic metre, more than four times above the local recommendation. This year, since the first week of October, there has been a seven-time increase in PM2.5 levels.

On the other hand, over the years, Beijing, the other city in dubious competition with Delhi, set higher emission standards, capped the number of cars sold in the city, banned diesel cars and took pollution emergency action. “We could not keep the momentum going. There wasn’t any aggressive control of pollution,” says Anumita Roychowdhury, executive director of CSE.

By the way, we also know what Delhi needs to do to make its air clean.

The city needs to scale up its public transport and clean up the congestion around Metro stations and improve last mile connectivity from the stations to neighbourhoods. Imposing a congestion tax and making parking more expensive should help dampen the city’s car addiction. Slashing of diesel subsidies or higher taxes on diesel vehicles could help. The government should take emergency action to reduce emissions on high-pollution days.

So what is Delhi doing after the latest round of pollution-triggered outrage this winter?

It is confusion, as usual.

Rattled by an irate media and fretful judges, the local government, in what many said was a knee-jerk reaction, proposed that private vehicles with odd and even registration numbers would only be allowed to operate on alternate days to curb pollution. Nobody quite knows how it will be implemented in a chaotic city of 18 million people. More sensibly, it proposes shutting down power plants, vacuum cleaning roads, restrict movement of trucks and a parking ban on certain roads.

“But as soon as the winter eases and we come to the end of January, things will be back to square one. Nobody will be talking about the pollution anymore,” says environmental lawyer Ritwick Dutta.

Delhi’s failure to keep its air clean mirrors the problems the country faces in carrying out root and branch reform.

That is because hard decisions need aggressive collective action. Using air purifiers and masks will not help solve the problem.

Delhi – and the rest of India – needs to seriously begin putting into action a comprehensive clean air law which dates back to 1981, but is hobbled by poor implementation. As one lawyer tells me, there has not been a single conviction under this law, which recommends a minimum punishment of 18 months for an offender.

Successive governments have shied away from cutting subsidies that end up benefiting the rich. “But all politicians fear public backlash against unpopular decisions,” says Ms Roychowdhury.

Then there’s the equity issue.

Many believe that Delhi tends to end up “exporting pollution” to neighbouring states and cities. Last week, the National Green Tribunal asked the government whether old vehicles from Delhi could be moved to cities that are less polluted.

With its wide roads and scant pavements, Delhi, many believe, is a city impervious to the needs of the poor. Only 10% of Delhi’s residents take cars to work, and many car owners are loathe to use public transport. More space is allotted for a car parking slot (23 sqm) than to low-cost housing for poor people (18-25 sqm).

The media is not very helpful either. When farm fires in neighbouring Punjab end up fouling the air in Delhi, there is very little coverage on how these fires are affecting the lives of people living in Punjab in the first place.

Rising air pollution is a national calamity, but the media and policy makers tend to treat it as Delhi’s problem alone. Thirteen of the world’s 20 most polluted cities are in India. What about the other 12?

“Delhi should be a wake-up call for the rest of the country. But ignoring others or passing the pollution to neighbouring states will be self-defeating,” says Mr Dutta.