As China’s Propaganda Push Continues, Wuhan Emerges as a Star

They came out one after another, with flourishes and fanfare. A six-hour documentary series, showing the “heroic deeds of party members” and Wuhan’s “warriors in white coats.” A star-studded, 20-part drama, fictionalizing Wuhan’s doctors, delivery drivers and construction workers. Another pandemic show, set to swelling choral music, that viewers said left them choked with tears.

Wuhan, once synonymous with the devastation that the coronavirus could wreak, has become the subject of glowing paeans across Chinese media, lauded by officials as a symbol of the country’s resilience in the outbreak’s aftermath.

Propaganda agencies have churned out the television tributes to the city, where the outbreak first emerged, while the national Ministry of Culture and Tourism sponsored a new opera about its doctors. State news outlets have emphasized a rush of tourists to Wuhan, and at least one hospital recently welcomed business executives for a tour.

Wuhan is getting such attention as a city of heroes in part because it has truly made a remarkable recovery. Cases there and nationwide now hover near zero, as the United States and other countries still battle surges.

But the spate of acclamation is also part of a concerted campaign by the Chinese government to position Wuhan — and by extension China — as a global emblem of superior governance. It’s a propaganda push designed to help sand away any lingering public anger over the government’s costly missteps in the early weeks of the pandemic. 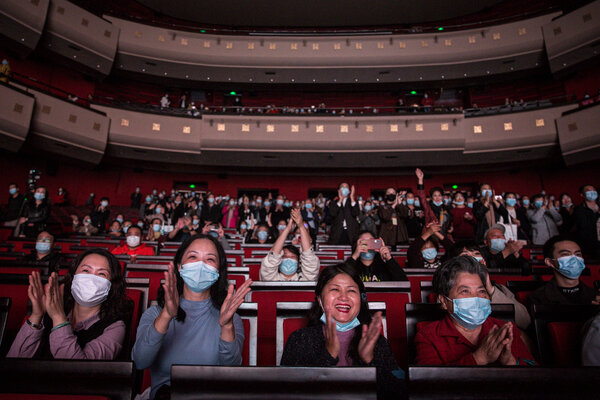 During the outbreak’s height in China, Wuhan was the epicenter of a rare outpouring of rage at the authorities and their attempts to conceal the virus. The recent narratives rewrite the experience, celebrating only the success and leaving little room for grief.

One of the new dramas shows the head of a hospital giving a rousing speech to his staff just as Wuhan is locking down in January — then cuts straight to April, when the outbreak has been controlled. The doctors, in slow motion, take off their masks and smile at the camera. A segment in another series ends with a grandmother discharged from the hospital, as her son announces that he and his ex-wife are getting remarried.

The instructions of China’s top leader, Xi Jinping, echo throughout the episodes. In reality, he was largely absent in the outbreak’s first weeks.

The shows are grounded in elements of the truth. Some of the protagonists in the fictionalized series are based on real people, such as a hospital leader who insisted on working despite battling his own chronic illness. And the programs show some of the pain of the early outbreak, when exhausted doctors limped through overwhelmed hospitals and comforted mourning relatives.

But that pain reliably turns into happy endings. There is no mention of the whistle-blowers who were punished for warning friends about the virus. Nor is there acknowledgment of the citizen journalists who documented the toll before being arrested — some of whom are still missing.

A tight censorship regime makes it difficult to judge public opinion in China, and many of the episodes have been lauded online. But some have also drawn rebukes on social media, with viewers criticizing the gloss on the city’s suffering and overly tidy story of victory.

Guo Jing, a social worker and feminist activist who has published her diary of the Wuhan lockdown, said she worried the official narrative would prevent a true accounting of the crisis, and make its heavy toll seem acceptable.

“This kind of narrative, it really does recognize everyone’s contributions and sacrifices,” Ms. Guo said. “But it also erases all the pain that people experienced, and it also doesn’t ask, were everyone’s sacrifices really necessary?”

Officials were clearly thinking about how to tell Wuhan’s story from the outset of the crisis. The government commissioned one of the fictionalized shows, “With You,” in February, while people in Wuhan were still dying, and the screenwriter visited Wuhan in March, while the city was still under lockdown. (Three days before the screenwriter arrived, a viral video showed a Wuhan resident yelling out her window at a visiting official, “Everything is fake!”)

“Reflect China’s feats and achievements in fighting the epidemic with language and details that normal people can understand and feel,” an official with the State Administration of Radio, Film and Television said of the show’s mandate, according to local media.

The shows fit into a broader narrative of triumphalism, which has been bolstered by China’s efforts to restart its economy. A few dozen executives of multinational companies visited Wuhan recently, ostensibly to discuss future business opportunities, but they also toured a hospital and offered copious praise for China’s response to the epidemic. Louis Vuitton last month made Wuhan the first stop of a new traveling exhibition.

Wuhan and its residents have good reason to celebrate after a brutal, 76-day lockdown that left the city emotionally scarred and economically damaged. The city, with its packed pool parties and crowded amusement parks, is now proof of the country’s broader recovery — and China is grateful.

Wang Zhiyi, a 30-year-old artist, said that when he passed by hospitals in the city, he often saw flowers and other thank-you gifts left outside.

When the outbreak began, Mr. Wang was in Shanghai for work and had trouble finding a place to stay; people shied away from his Wuhan license plates and Wuhan ID card. Now, when he leaves Wuhan, people express admiration or sympathy when they find out where he is from.

“Everyone knows that Wuhan is the safest place now,” he said, referring to the city’s epidemic control measures.

But the propaganda efforts have also elicited anger from people who see the authorities’ elisions and carefully curated details as an effort to deny what the public saw for itself.

One of the new dramas, “Heroes in Harm’s Way,” drew fierce criticism online for suggesting that women did not contribute to the fight against the virus. After a different documentary series, produced by the state broadcaster, did not mention Li Wenliang, the doctor who was punished for warning friends about the virus and then later died of it, internet users condemned the omission.

The speed with which the new shows were produced highlighted the government’s desire “to shape this discourse quicker, more efficiently, on more platforms,” she added. “Because it is a really traumatic case, and I’m sure many people will probably still be recovering from it for a very long time.”

Some residents said they saw the scars of the outbreak all around them, alongside the signs of recovery.

Sophia Huang, a lawyer, said that taxi drivers she met often complained about how bad business was, and still worried about a fresh outbreak erupting. One of her friends had fallen seriously ill with the virus and spent time in one of Wuhan’s temporary hospitals.

When she visited a courthouse recently, she overheard a man telling a judge he wanted to sue a hospital for turning his father away during the epidemic. She herself had a client involved in an inheritance dispute, after his father died of the virus.

“I think many Wuhan people are still living in a kind of pain,” Ms. Huang, 35, said. “We’re not actually as successful as the media says. ”

She would gladly watch an objective documentary about the outbreak that took stock of both the government’s victories and its mistakes, she said. “But obviously that is not possible right now.”