KABUL, Afghanistan — It started as a dispute between boys: Naseebullah Barakzai, 13, was irked when a neighbor boy stole fruit and ripped limbs from his family’s pomegranate tree, and he shoved the younger boy to the ground, relatives say.

Just two days later, Naseebullah was dead, and his village, in the southern Afghan province of Kandahar, was in an uproar. His family and other residents accuse an influential police checkpoint commander of taking the other boy’s side and abducting and raping Naseebullah, fatally injuring him.

It is the kind of sexual assault that has run rampant within the Afghan security forces. And in other forms, child abuse has become ritualized: One practice, in which powerful men molest young boys and force them to dress and dance in girls’ clothing, is widely known as bacha bazi, or boy play.

Poor families have suffered for years as commanders and their men have preyed on them, part of a broader culture of corruption in the security forces that led to efforts to reform the military and police. But officials have been reluctant to acknowledge, much less confront, the endemic issue of sexual abuse of children — including bacha bazi and minors forced into marriage — though those practices have been officially outlawed.

In the case of Naseebullah, though, public outrage appears to be forcing a rare reckoning.

Naseebullah’s family, backed by a throng of elders from the village of Karezak, marched into the offices of Kandahar’s governor, Hayatullah Hayat, to demand justice and the arrest of the police commander, First Lt. Mullah Roozi Khan, last month. And it worked: The government quickly arrested Lieutenant Khan and six of his officers, who are in jail while an official investigation is underway to determine whether to charge them.

Naseebullah’s mother and brother said that Lieutenant Khan and his men abducted, beat and raped the sixth-grader, who was dumped the next day at a hospital. They said hospital officials told them that Naseebullah had suffered severe internal injuries before he died, on Sept. 18, and that the men who dropped him off claimed that he had fallen from a roof.

But the doctor who operated on the boy, speaking on condition of anonymity, said that he had observed extensive internal injuries consistent with forced penetration.

The allegations against the commander test the jurisdiction of Afghanistan’s American-backed government, which holds limited sway in provinces outside the capital, Kabul. As Afghan and Taliban negotiators discuss a possible peace deal, the militants are still conducting attacks nationwide, exposing the government’s inability to protect its citizens in violently contested provinces like Kandahar.

Under these circumstances, the dead boy’s family and neighbors are demanding government action in a district nominally under government control.

“I want President Ghani to give us justice — nothing else,” Naseebullah’s mother, Bibi Amina, 50, said of President Ashraf Ghani. “This crime defamed the name of Islam.”

Naseebullah’s brother, Ehsanullah Barakzai, 26, said the governor had assured the family that no one, not even a powerful police commander, was above the law. But he said the guilty often go unpunished if they are rich or influential.

“We still don’t know whether this criminal will be punished or set free,” Ehsanullah said of the jailed commander.

The lieutenant and his men could not be reached for comment, and in recent days were transferred to a prison in Kabul as the investigation continued.

Wali Mohammad Askar, the Criminal Investigation director for Kandahar, said his office would conduct a thorough investigation and publicly announce the results. “We assure all the people of Kandahar, and especially the relatives of the victim, that no one who is guilty will be spared justice,” Mr. Askar said. 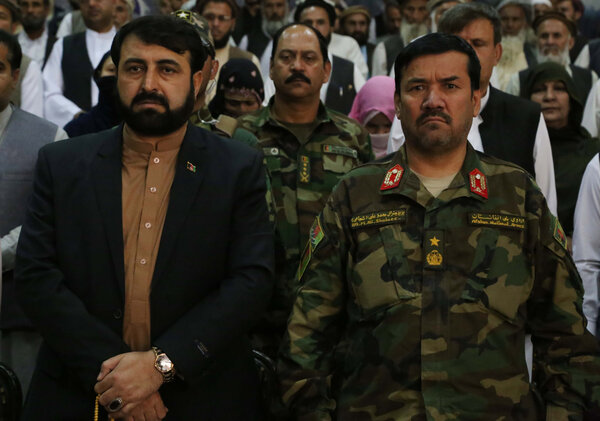 But in similar cases nationwide, authorities have promised to investigate, only to quietly release suspects after interest fades.

“When powerful people are involved, often we don’t hear about the investigation again after the first few days,” said Shaharzad Akbar, chair of the Afghanistan Independent Human Rights Commission.

Ms. Akbar said families often don’t report child sex crimes because of shame or fear of official retribution. But in Naseebullah’s case, the family asked the human rights group’s office in Kandahar to monitor the case and consult with authorities to ensure transparency, she said.

In Logar Province, south of Kabul last November, a local child advocacy group publicized statements from 165 schoolboys who said they had been raped by teachers, principals or police officers. Afghanistan’s national intelligence agency quickly detained the two leaders of the advocacy group and coerced them to publicly recant the allegations.

After the American Embassy in Kabul and human rights groups intervened, the two advocates were released; one has since fled Afghanistan. Twenty suspects have been arrested and charged with raping the boys, and trials have begun for four of them, Ms. Akbar said.

Jamshid Rasuli, spokesman for Afghanistan’s attorney general, said the office had conducted “a comprehensive and extended investigation” in Logar and would announce the results soon.

In July, four Afghan security force members, including a company commander, were jailed after they were accused of raping and beating a 13- and a 14-year old boy inside a battalion headquarters base in Takhar Province in northern Afghanistan. The 13-year-old’s cousin, Qurban Ali Hairat, said he found the boys in a room on the battalion base, both injured so badly that they were unable to walk. He said they told him they had been raped by soldiers.

Brig. Gen. Mohammad Ali Yazdani, commander of the 217th Pamir Corps in Takhar, said military prosecutors were investigating the case while the soldiers remained in custody,

In 2015, an investigation by The New York Times found widespread sexual assault of boys by Afghan security force members, and that the American military was reluctant to intervene. The article reported that an American captain was relieved of command and a sergeant was pressured to retire after they confronted and shoved an Afghan militia commander who had raped a boy.

The investigation prompted a report by the Special Inspector General for Afghanistan Reconstruction on the military’s reluctance to confront bacha bazi, a practice centuries old.

Afghanistan made bacha bazi and similar offenses violations of the national criminal code in 2017. The penalty for violating the code is up the three years in prison — three to five years if the dancing is “a public event.” But human rights advocates say the codes are rarely enforced.

In Kandahar, the spokesman for the governor promised that justice would be done for Naseebullah. “Nobody is above the law, and we are committed to following the rule of law and we will complete the investigation soon,” the spokesman, Baher Ahmadi, said.

The dead boy’s mother was not convinced.

Mohammad Nazem, a neighbor in the Dand district where Naseebullah lived, said hundreds of people turned out for the boy’s funeral and railed against government officials. He said a failure to punish those responsible would only harden the hatred that many residents harbor toward the government.

“We cannot imagine a human being doing such a thing to a teenage boy,” Mr. Nazem said. “We would prefer that he be shot and killed, not murdered in this cruel way.”