Reinforcements sent to the site in Ghanzi province were repeatedly ambushed along the way, officials said. 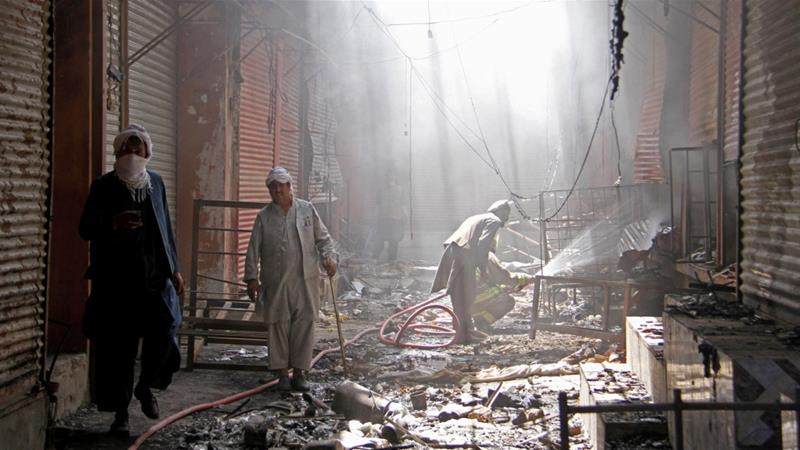 A Taliban attack on a checkpoint in the eastern province of Ghazni has killed at least 13 soldiers and policemen, officials said.

Afghan reinforcements were dispatched to the site after Monday’s attack in Khogyani district – located on the main road between the capital, Kabul, and the Afghan south – but were repeatedly ambushed along the way.

The checkpoint was part of a belt of strongholds built around Ghazni after the city was briefly overrun by the Taliban in August in one of their biggest offensives in years.

At the time, hundreds of people fled the city amid intense fighting between Afghan forces and the Taliban that killed about 120 members of the security forces and civilians.

Arif Noori, spokesperson for the provincial governor in Ghazni, said that seven soldiers and six policemen were killed in Monday’s raid.

According to Noori, six Taliban fighters were killed and more than 10 others wounded during a three-hour gun battle with Afghan forces after the initial attack.

In a statement sent to the media, Taliban spokesperson Zabihullah Mujahid said his group claimed responsibility for the raid.

The joint army and police checkpoint was set up just two days ago in a strategic area to cut off a supply route for the Taliban but was now completely burned down and destroyed, Noori said.

“Reinforcement were rushed to assist the forces under attack but they were ambushed by other Taliban fighters at least four times while on their way to the checkpoint,” said Noori.

Ghazni is the only one out of 34 Afghan provinces where the country’s October parliamentary elections could not take place for security reasons.

Voting there has been postponed for a year.

A US watchdog agency said last week that the Afghan government was struggling to recover control of districts lost to the Taliban while casualties among security forces had reached record levels.

The government had control or influence over 65 percent of the population but only 55.5 percent of Afghanistan’s 407 districts, the Special Inspector General for Afghanistan Reconstruction said in a report earlier this year.

The latest phase of Afghanistan’s decades of war began in late 2001, when US-led troops overthrew the Taliban in response to the September 11 attacks that year on the United States.