‘A Game of Chicken’: U.S. and China Are Risking a Clash at Sea

HONOLULU — From a distance, the Chinese warship warned the American destroyer that it was on a “dangerous course” in the South China Sea. Then it raced up alongside, getting perilously close. For a few tense minutes, a collision seemed imminent.

The American vessel, the Decatur, blasted its whistle. The Chinese took no notice. Instead, the crew prepared to throw overboard large, shock-absorbing fenders to protect their ship. They were “trying to push us out of the way,” one of the American sailors said.

Only a sharp starboard turn by the Decatur avoided a disaster in the calm equatorial waters that early morning in September — one that could have badly damaged both vessels, killed members of both crews and thrust two nuclear powers into an international crisis, according to a senior American official, who spoke on condition of anonymity to describe the encounter in detail.

The ships came within 45 yards of each other, marking the closest call yet as the United States Navy contests China’s military buildup in the South China Sea. The Sept. 30 encounter signaled what American commanders fear is a perilous new phase in confrontations in the disputed waterway, which are unfolding without even a Cold War-style agreement on basic rules of conduct aimed at preventing escalation.

“A game of chicken is being played around Asia’s flash points,” said Brendan Taylor, an expert on the South China Sea at the Australian National University. 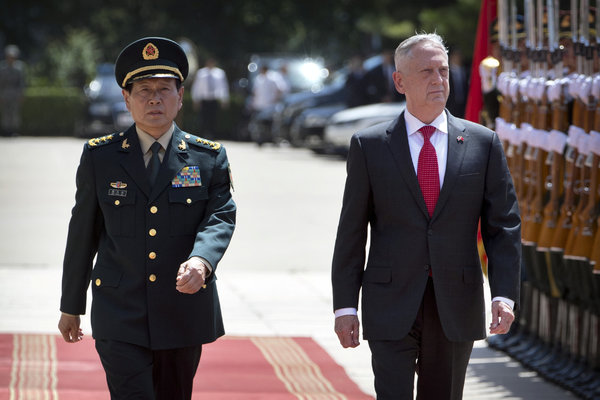 “It is only a matter of time before a clash occurs,” Mr. Taylor said, adding that he sees significant potential for such an event to escalate into a larger crisis.

China’s defense minister, Wei Fenghe, and Secretary of Defense Jim Mattis are expected to make an effort to calm those rising tensions and reduce the risks of miscalculation when they meet in Washington on Friday.

But the trade war and Vice President Mike Pence’s speech last month declaring that the United States would take a far tougher line on China give the two men little incentive to ease tensions in the waterway.

Despite the risks, neither side appears ready to back down.

The United States and China “will meet each other more and more on the high seas,” the chief of naval operations, Adm. John M. Richardson, warned after September’s near miss.

The Trump administration told the Navy last year to execute more operations against China’s territorial claims, and it has sent warships more frequently to waters near the artificial islands China has bulked up with aircraft hangars, runways, deepwater harbors and, most recently, short-range missiles. Washington also recently asked allies to contribute their ships to the task.

“In response to this situation I believe that China will have to take the necessary measures to increase the cost of such provocative actions by the U.S. and other relevant countries,” said Wu Shicun, president of the National Institute for South China Sea Studies in Haikou, China, who often reflects the view of the Chinese Navy. “Otherwise the actions of the provocative parties will only be more frequent and unscrupulous.”

The near crash with the Decatur showed, however, the dangers of the rivals squaring off against each other.

The incident occurred as the Decatur, with 300 crew members, sailed within 12 nautical miles of Gaven Reef, a pair of outcroppings in the sea that China has enlarged and fortified with weaponry since 2014. The Chinese destroyer, called the Lanzhou, with a similar number of seamen, sped up from behind and overtook it.

This account of what happened is based on interviews with American officials, as well as a video released by the British Ministry of Defense to The South China Morning Post that was described as authentic by an American defense official.

As China deploys more planes and ships to challenge American dominance in the region, such encounters may become more frequent. The United States says there were 18 unsafe incidents in the air and at sea between Chinese and American ships and aircraft in the Pacific region last year, a slight increase from previous years.

The lack of an agreement between China and the United States on the rules of the game in the South China Sea raises the risk of a deadly mishap, analysts say.

In 2001, a collision between a Chinese fighter jet and an American EP-3 spy plane over the waters off Hainan Island killed a Chinese pilot and soured relations for months. The two governments later agreed to set up a hotline between their militaries for handling such incidents, but that channel was not entirely effective.

During the Cold War, Washington and Moscow abided by an Incidents at Sea Agreement that more or less governed the way the navies of the two countries operated. But the naval contest between the United States and China is different.

Then, Moscow and Washington wanted to ensure freedom of navigation of the high seas to allow both powers to pursue their global interests. The rivalry between Beijing and Washington, however, centers on China’s territorial claim over virtually the entire South China Sea and America’s efforts to challenge it. The two sides have staked such adamant positions that any compromise to defuse or avoid confrontations seems unlikely.

The mission of the Decatur was to make the point that the high seas are open to all, and that the 12-mile zones claimed by China as sovereign territory do not stand up to international law. The Chinese argue that international law, as defined by a 2016 ruling by the Permanent Court of Arbitration in The Hague, does not apply.

In 2014, the United States and China, along with other countries, signed the Code for Unplanned Encounters at Sea, which mimics aspects of the earlier pact with the Soviets and spells out protocols for confrontations.

But the code is voluntary, and it does not address the basic question of territorial waters and who can go where, said Collin Koh, a maritime specialist at the Rajaratnam School of International Studies in Singapore. “It’s more like a gentleman’s agreement,” he said.

Last week, Admiral Richardson urged China to “return to a consistent adherence to the agreed code,” which he said would “minimize the chance for a miscalculation that would possibly lead to a local incident and potential escalation.”

In effect, he was asking Chinese vessels to stop acting as lords of the South China Sea.

The growing sense of confrontation is enhanced by American concerns that its ships and crews are on the defensive after 70 years of unquestioned power across the Pacific Ocean.

In May, the head of the United States Indo-Pacific Command, Adm. Philip S. Davidson, told Congress that China controlled the South China Sea “in all scenarios short of war.”

That has led to a re-evaluation of the Navy’s strategic and spending priorities. As the Trump administration pushes the Navy to do more in the South China Sea, it is doing so with fewer assets just as the Chinese are increasing theirs.

In 2017, China had 317 warships and submarines compared to 283 in the American Navy. Even with 60 percent of the Navy in the Pacific, a smaller total force means fewer deployments around China’s periphery.

A projection by the Pentagon shows that by 2025, China’s military will have 30 percent more fighter aircraft and four aircraft carriers compared to its current two, a senior American military official said. The Chinese are also expected to have significantly more guided-missile destroyers, advanced undersea warfare systems and hypersonic missiles, the projection says.

The American concerns about Beijing’s naval modernization are reflected in a fictional account titled “How We Lost the Great Pacific War,” written by the director of intelligence and information operations of the Pacific Fleet, Dale F. Rielage, and published in an official Navy journal.

The article portrays a possibly dark outcome for the American Navy in the Pacific.

Written in the form of a military dispatch from the year 2025, the author laments how the Navy had to “cannibalize aircraft, parts and people” and wonders if it will be able to “claw” its way back in the Western Pacific.

At the heart of this bleak prognosis is an assumption that the United States did not act aggressively enough in challenging China when it still could.

The article describes how an admiral, at the start of his term as chief of naval operations, saw that the Americans’ margin of victory in high-end naval combat had become razor thin — and would continue shrinking. “At the time, he assessed that the margin, though thin, remained ‘decisive.’ In the years following, however, the margin shifted imperceptibly to favor the other side.”

The article never names “the other side,” but makes clear: it is China.

Jane Perlez reported from Honolulu and Steven Lee Myers from Beijing. Follow them on Twitter at @janeperlez and @stevenleemyers