We’re covering the ouster of President Trump’s national security adviser, the most powerful tech regulator in the world and a place for retirees to get the American college experience. 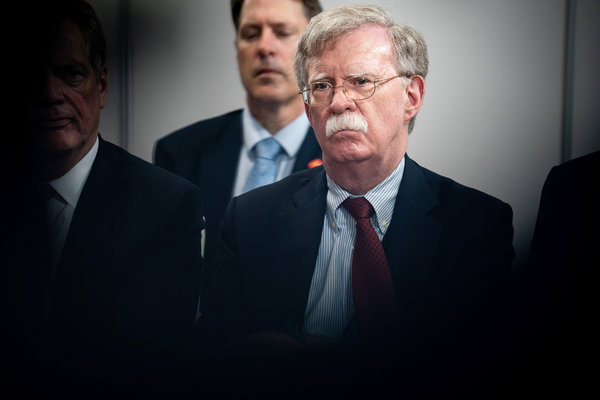 President Trump abruptly fired John Bolton, his national security adviser, with whom he had fundamental disagreements over Iran, North Korea and Afghanistan.

Mr. Bolton, a foreign policy hawk who insisted he resigned, objected to attempts to pursue diplomatic avenues with players considered American enemies. And he angered Mr. Trump with a last-minute battle against a peace agreement with the Taliban.

Mr. Trump said he would appoint a replacement in the “next week.”

Voice of restraint: Mr. Bolton was the in-house skeptic who checked Mr. Trump’s most unorthodox instincts. Whether it was inviting the Taliban to Camp David or cooperating with Russia, he was the national security adviser who said no.

Related: The Trump administration’s decision to pull the plug on negotiations with the Taliban at Camp David inadvertently provided the Afghan president, Ashraf Ghani, with a lifeline, bringing his re-election bid back into the spotlight.

The world’s most powerful tech regulator

The new leadership and organization of the European Union’s 32,000-strong executive arm was unveiled on Tuesday.

Among the highlights: Margrethe Vestager, whose billion-dollar fines have made her loathed by Silicon Valley, assumed more power than ever, expanding her portfolio to become the equivalent of the E.U.’s digital czar.

The role, combining antitrust enforcement and digital regulation, underscores that the E.U. is positioning itself as the leading tech privacy regulator.

A new defense union: A branch led by Sylvie Goulard will deal with the development of weapons and defense systems in the E.U. It seems a direct response to President Trump’s criticisms that the bloc relies too much on NATO and the U.S. for its defense. Read our other takeaways.

Netanyahu pledges to annex much of the West Bank

Facing a heated election next week, Prime Minister Benjamin Netanyahu of Israel said he would move swiftly to annex nearly a third of the occupied West Bank.

Rivals looked at the announcement as a transparent political ploy, meant to garner support as Mr. Netanyahu battles for survival in a re-election clouded by corruption charges. Mr. Netanyahu said he wanted to capitalize on the Trump administration’s openness to the plan.

Impact: The annexation would reshape the Israeli-Palestinian conflict, and would reduce any future Palestinian state to an enclave encircled by Israel.

On the ground: In the West Bank village of Fasayil, near the border with Jordan, residents said Israel should fix the electricity before talking about annexation.

He wants to resettle refugees in a swath of Syrian territory controlled by the U.S. and its Kurdish allies.

For transgender Indians, a dream denied

Two years ago, a pioneering state government effort in central India to recruit transgender police officers seemed like a rare opportunity for some in the community to move out of poverty and protect themselves from harassment and exclusion.

But steep competition for limited openings, infighting and mismanagement has resulted only in disappointment.

Italy: Prime Minister Giuseppe Conte won a crucial vote of confidence in the Senate for his new coalition government, paving the way for pledged overhauls to the country’s economy and sectors like research and education.

Brexit scene: John Bercow saying he doesn’t “give a flying flamingo.” Opposition lawmakers trying to physically block Mr. Bercow from leaving his speaker’s chair. Antiquarian costumes. Chants of “Shame!” These were just a few highlights from the 2 a.m. close of British Parliament’s longest session in modern history. We take you there.

Apple: At its yearly product unveiling, the company dropped its goody bag of new gadgets and updates on old standbys, including three new iPhones aimed at drumming up sagging enthusiasm for its flagship moneymaker. Separately, we looked at how Apple’s apps crowded out rivals in its own app store.

Iran: A young woman’s dream was to watch a soccer match from a stadium in Iran, where women are barred from most sports events. After she was caught and arrested, she set herself on fire. Her death this week has sparked an outcry from Iranian and international soccer players.

Snapshot: Above, Judy and Martin Cohen (and their cat Carly), who are getting ready to go back to school. Universities and colleges across the U.S. are sponsoring retirement communities on campus, so that young and old can enrich each other’s lives in different ways.

Remembering 9/11: Since 2003, members of the New York Fire Department have been invited to Italy to train and compete with gondoliers the day before Regatta Storica as a show of solidarity. Separately, we look at the tributes and personal artifacts left by visitors at the 9/11 Memorial and Museum in Lower Manhattan and preserved in the museum’s official collection.

What we’re watching: This viral video (in case you missed it). “Because,” writes the briefings editor Andrea Kannapell, “sometimes you just need a good hug — or to see one.”

Go: Built nearly 150 years ago, the over-the-top Palais Garnier has become part of the identity of Paris. Our critic went behind the curtain.

Read: A dedicated fan of Isabelle Huppert explains — via a comic strip — what it is about the actress that can upend a movie lover’s most cherished ideas.

Smarter Living: The costs of preschool and day care are a significant financial strain for most parents. But studies have found that a majority keep child-related debt a secret. Why do the difficulties feel so unspeakable?

Readers shared their own stories about the costs of raising children.

With the Bahamas struggling back from a devastating hurricane and Tokyo recovering from a record-setting typhoon, we found ourselves asking why dangerous storms were likelier to erupt at predictable times of the year.

The answer emerges from global phenomena. Radiation from the sun falls unequally on our tilted, spinning planet, hitting with most impact at the Equator. There, the hot air rises into the atmosphere and power tropical cyclones through evaporation and the Coriolis effect, the spin created by Earth’s curvature.

Tropical cyclones in the Atlantic — hurricanes — are most likely to occur after surface temperatures peak and large amounts of moisture are already in the atmosphere. That season lasts from June to November, with the most perilous period from mid-August to mid-October.

Tropical cyclones in the northwestern Pacific — typhoons — can form year-round because of warmer waters, but they most commonly occur from May to October.

And global warming has increased the amount of energy absorbed by oceans, which scientists believe has resulted in stronger storms.

That’s it for this briefing. And sorry, another correction. Tuesday’s Back Story misspelled the surname of Alan Siegel, the brand consultant who devised the N.B.A.’s logo. See you next time.

Thank you
To Mark Josephson and Eleanor Stanford for the break from the news. Will Dudding, an assistant in the Standards Department, wrote today’s Back Story. You can reach the team at [email protected]

P.S.
• We’re listening to “The Daily.” Our latest episode is about the collapse of talks between the U.S. and the Taliban.
• Here’s today’s Mini Crossword puzzle, and a clue: Around 3.5% of ocean water (four letters). You can find all our puzzles here.
• On Thursday, our columnist Andrew Ross Sorkin will interview the president of Microsoft, Brad Smith, and the U.S. Treasury secretary, Steven Mnuchin, in Washington. The interviews will be livestreamed on DealBook’s Twitter page.