We’re covering the ascension of Japan’s new emperor, uncertainty in Venezuela and the tales hidden in tree rings. 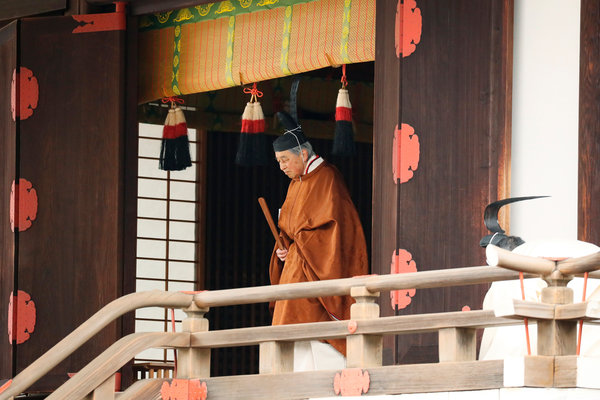 Emperor Naruhito ascends to the Chrysanthemum Throne today, signifying the start of a new era. Yesterday, his father, Akihito, became the first emperor to abdicate in 200 years.

For this unusual shift in the world’s oldest monarchy, our Tokyo bureau chief took a deeper look at the royal family, which has faced near extinction, intrigue, drama and disappointments.

Part 1: After World War II, when Akihito was a 12-year-old crown prince, international pressure was mounting to prosecute Japan’s royal family, and the fate of the monarchy hung in the balance.

Part 2: In 1975, Akihito and his wife, Michiko, visited a seething Okinawa. His mission: to atone for Japan’s wartime sins.

Part 3: A decade later, the future of the royal family was again at stake, this time hinging on Naruhito’s finding a wife — and fathering a son. He fell in love with a diplomat and, despite the country’s impatience, waited six years for her.

Part 4: To marry Naruhito, Masako Owada gave up everything: career, travel, independence. But all the country seemed to care about was whether she could give birth to a son.

Part 5: Princess Mako, the oldest granddaughter of Akihito, fell in love with a commoner with shaggy hair. Even though she won’t come anywhere near the throne, the country is grappling with one question: Is he good enough?

In a video posted on social media, the opposition leader, Juan Guidó, called on the people and the military to rise up against President Nicolás Maduro. He was flanked by men in uniform at an air force base in the heart of the capital, Caracas.

Later in the day, John Bolton, the U.S. national security adviser, told reporters that central figures in the Maduro government had committed to help transfer power to Mr. Guaidó.

They, however, publicly stated their support for Mr. Maduro. Here’s our live briefing.

Catch up: Here’s an overview of the situation in Venezuela.

President Maithripala Sirisena announced the “immediate” lifting of a temporary ban on social media networks imposed after the Easter Sunday bombings, aimed at preventing the spread of misinformation that might foment unrest.

The investigation: The Islamic State’s leader, Abu Bakr al-Baghdadi, said the bombings were carried out by his fighters, but investigators are still trying to pin down direct connections between ISIS and a local terrorist organization. One lead they’re following is possible travel to Syria by one of the bombers.

Go deeper: Religious tension has surged in Sri Lanka since the attacks, which killed more than 250 people in churches and high-end hotels.

The mostly Buddhist Sinhalese say their survival is being threatened by the country’s Muslims, though the Sinhalese make up three-quarters of the population and dominate politics. This dynamic, sometimes known as a majority with a minority complex, can be seen in the rise of right-wing populism and nationalism around the world.

If you have 18 minutes, this is worth it

Reading between the tree rings

Trees, it turns out, are giant organic recording devices. The circles etched into the trunk tell ancient stories about past climate, civilizations, ecosystems and even galactic events, much of them many thousands of years old.

Apple: The company’s revenue fell in the latest quarter on weak iPhone demand, its first consecutive quarterly decline in more than two years. Check back here for updates.

C.I.A.: A former officer accused of working with Beijing is expected to plead guilty to charges of unlawful retention of secret information and conspiracy to deliver it to aid a foreign government. His prosecution came amid increased concern in Washington about Chinese espionage in recent years.

China: President Xi Jinping commemorated the 100th anniversary of the May 4 student protests against Western colonialism, using the moment to burnish his brand of authoritarian nationalism while playing down the anti-authority themes that emerged from the movement.

Facebook: The social media company unveiled a redesign of its mobile app and desktop site, adding features to promote private group communication rather than the public News Feed. The shift is a sign of how privacy scandals have forced Facebook to change.

U.S.: President Trump ordered new restrictions on asylum seekers, including setting a fee for their applications and work permits. The move is the latest attempt by the president to shape asylum law, which is usually decided by Congress.

Muslim Brotherhood: The Trump administration is said to be pushing to designate the Islamist political movement as a foreign terrorist organization. The designation would come on the heels of an April 9 White House visit by the Egyptian president, Abdel Fattah el-Sisi, who is politically opposed to the group.

Snapshot: Above, the Somali-American model Halima Aden, who will be the first woman to wear a hijab and burkini in Sports Illustrated’s annual swimsuit issue.

The Obamas: Barack and Michelle Obama’s new video production company revealed it is working on seven projects for Netflix, including a drama series on “the barriers faced by women and people of color,” a movie about Frederick Douglass and an adaptation of The Times’s “Overlooked” obituary series for people whose deaths were previous unreported in the paper.

What we’re reading: This piece in The Guardian. Stephen Hiltner, who’s been writing some of our briefings, says: “This characteristically brilliant essay by one of my favorite nature writers, Robert Macfarlane, asks us to consider the world’s oft-neglected underground spaces — and what they might tell us about our planet’s future.”

Cook: Are you a planner? Then try this recipe for Marsala-marinated chicken with roasted vegetables.

Watch: Lisa Hanawalt, the illustrator behind “BoJack Horseman,” has created “Tuca & Bertie,” about two 30-something bird-women. “It was important to me to show that women are gross,” she said.

Read: “Spring” is the most political book thus far in Ali Smith’s earthy and humane series. Its heart is worn far out on its sleeve, our critic writes.

Go: Bereavement wears a black bathrobe in “Grief Is the Thing With Feathers,” playing at St. Anne’s Warehouse in Brooklyn.

Smarter Living: Are you always too busy? There’s a way out of the madness. Taking regular breaks to do nothing improves productivity. Whether at work or at home, sitting still might be uncomfortable at first and could take practice — just like exercise. Keep your devices out of reach, and play with open-ended toys such as kinetic sand.

And bring this list of questions to ask your vet at your next appointment.

In many countries, today is observed as International Workers’ Day. The date memorializes a conflict that became a flash point in the organized labor movement around the world.

In 1886, on the fourth day of national protests in the U.S. calling for an eight-hour work day, police officers responded to a homemade bomb in Chicago’s Haymarket Square with gunfire. Within minutes, seven officers and four protesters were dead. Eight labor organizers were arrested, tried and convicted.

Socialist and Communist groups meeting in Paris a few years later chose to remember the Haymarket affair by making the date the protests began, May 1, a labor holiday. But some U.S. politicians feared following suit.

The country eventually followed the lead of a handful of states and Canada, which had been observing a holiday for workers in September since the early 1880s.

In 1894, the U.S. made Labor Day a national holiday, to be celebrated each year on the first Monday in September.

P.S.
• We’re listening to “The Daily.” Our latest episode is about the power struggle at the National Rifle Association.
• Here’s our mini crossword puzzle, and a clue: Sea ___ (sight off the California coast) (5 letters). You can find all our puzzles here.
• The Society of Professional Journalists recognized The New York Times for “Lost in the Storm,” a Magazine article following one family through Hurricane Harvey, and a follow-up “Daily” episode.