A potentially game-changing lawsuit against Google.

We’re covering the U.S. Justice Department’s lawsuit against Google, a mysterious string of illnesses in U.S. diplomats and spies and deepening ties between Israel and the U.A.E. 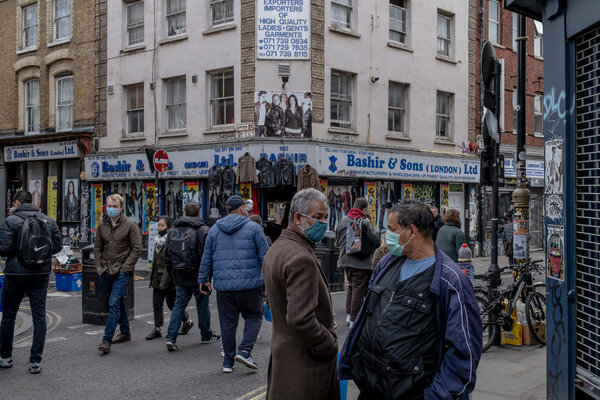 Scientists at Imperial College London plan to deliberately infect volunteers with the coronavirus early next year, beginning the world’s first effort to study how vaccinated people respond to being intentionally exposed to the virus and opening up a new, uncertain path to identifying an effective vaccine.

The hotly contested strategy, known as a human challenge trial, could potentially shave crucial time in the race to winnow a number of vaccine candidates.

While the method has been used to test vaccines for typhoid, cholera and other diseases, Covid-19 has few widely used treatments and no known cure, putting the scientists in charge of Britain’s study in largely uncharted ethical territory.

Details: The scientists will first administer tiny doses of the virus to small groups of volunteers who have not been vaccinated, followed by tests in which volunteers are given a vaccine and then intentionally exposed to a carefully calibrated dose of the virus.

Ireland became the first European country to reimpose a national lockdown, which will begin on Wednesday for a period of six weeks. People will be urged to stay home, and all nonessential shops will be closed.

Chinese vaccines have been administered to 60,000 people in clinical trials around the world, a senior Chinese official said. He said that none had experienced serious adverse reactions.

A third surge of coronavirus infections, which threatens to be the worst of the pandemic to date, has firmly taken hold across much of the United States. The daily total of cases could soon surpass 75,687, a record set in July.

The most aggressive challenge to a tech giant in decades

The U.S. Justice Department filed a long-awaited antitrust lawsuit against Google, accusing the company of maintaining an illegal monopoly over search. The suit is the most aggressive move against a tech giant in a generation. Google, owned by Alphabet, said the lawsuit was “deeply flawed” and told its employees to stay focused and quiet.

The government, joined by 11 states, is accusing Google of illegally protecting its dominant position in the market for search and search advertising with the deals it has struck with companies like Apple. Google pays Apple billions of dollars a year to have its search engine as the default option on iPhones and other devices. Here’s a quick overview of the lawsuit.

Attorney General William Barr has played an unusually active role in the investigation. He pushed career Justice Department lawyers to bring the case by the end of September. But the case will most likely take years to play out.

Opinion: Googling used to just be a verb for online searches, our columnist writes. Now it’s a tech brand that dominates many corners of our lives.

Officials say U.S. agencies are concealing the true extent of the episodes. U.S. lawmakers are pressing the State Department to release a study it received in August, which examined potential causes. The symptoms experienced by diplomats at the American Embassy in Cuba in 2016 and 2017 came to be known as Havana Syndrome.

Some senior officials at the State Department and former intelligence officers said they believed Russia played a role. The country’s intelligence operatives have seeded violence around the world, poisoning enemies in Britain and fueling assaults on U.S. soldiers in Afghanistan.

A ‘lobster war’ in Canada

A battle over the lucrative lobster industry in Nova Scotia has turned violent. Commercial fishermen have burned down buildings and assaulted Indigenous fishermen, accusing them of threatening their livelihoods by trapping lobsters outside the regulated season. Above, a lobster pound that was burned to the ground over the weekend.

The members of the Sipekne’katik First Nation negotiated the right to hunt and fish in a centuries-old treaty, and a court has ruled in their favor. The fight over lobster is the latest flash point in a series of abuses of Indigenous people in Canada.

‘Golden passports’: Cyprus and Malta will face European Union penalties if they do not abandon lucrative programs that sell passports to foreigners. The two nations have a history of building opaque banking systems that have been used for illicit purposes, particularly by Russian and Asian billionaires.

Kim Wall’s killer: The Danish inventor convicted of killing the journalist aboard his homemade submarine in Copenhagen in 2017 briefly escaped from prison on Tuesday. He took a staff member hostage but was arrested a short time later.

U.S. election: President Trump and former Vice President Joe Biden will face off on Thursday for the last time before Nov. 3. This time, their microphones will be muted for parts of the debate to avoid interruptions like those by Mr. Trump that marred their first meeting. Mr. Biden leads Mr. Trump by nine percentage points, our poll found, and voters view him more favorably on almost every major issue.

Snapshot: Nigerian security forces opened fire Tuesday night at a demonstration against police brutality in Lagos, hitting several people, and used tear gas in Abuja, above, in a major escalation of the unrest that has gripped the country for two weeks.

Lives Lived: Spencer Davis, the leader of the enduring eponymous 1960s rock group behind such hits as “Gimme Some Lovin’,” “I’m a Man” and “Keep On Running,” died at 81 on Monday.

What we’re reading: This Financial Times article about the future of the United States and its Constitution. Matthew Anderson, our European culture editor, calls it a “really good” look at “why the U.S. right now is a bit like the late Ottoman Empire.”

Cook: This apple pie from our Food editor, Sam Sifton, calls for precooking the filling before baking. It’s worth the extra effort.

Watch: The thriller “Utopia” centers on a wild conspiracy theory about viral epidemics — or not so wild, as it turns out, because the theory proves to be true.

Even under lockdown, there’s no reason to be bored. At Home has our full collection of ideas on what to read, cook, watch and do while staying safe at home.

The path to the U.S. presidency runs through about a dozen states known as battlegrounds or swing states.

Under the Electoral College, the system that governs U.S. presidential elections, the party that wins a state typically receives all of its electoral votes. Most states have clear majorities, either for Democrats or Republicans. But in swing states like Ohio or Iowa, the race is close enough that both candidates have a shot at winning.

Because of that, an outsize amount of time is spent campaigning in swing states relative to their populations. And, because the coronavirus pandemic presents new challenges for election officials, a single state’s readiness may determine the outcome.

Each of these states was won by Mr. Trump in 2016. Joe Biden is now ahead or effectively tied with Mr. Trump in most polls in all seven.

A shift in suburban politics has made Georgia, which typically aligns with Republicans, less of a long shot for Democrats. The state’s voting machines have malfunctioned in three consecutive elections this year alone.

In Pennsylvania, election officials are staring at possibly the biggest ballot processing backlog in the country, with no means of even touching the ballots until polls open on Nov. 3.

That’s it for this briefing. See you tomorrow.

P.S.
• We’re listening to “The Daily.” Our latest episode is about a pivotal U.S. Senate race in North Carolina.
• Here’s our Mini Crossword, and a clue: “The 1% of 1% milk” (three letters) You can find all our puzzles here.
• The word “ultimaybe” first appeared in The Times on Tuesday, according to the Twitter bot @NYT_first_said.
• Matthew Futterman, one of our sports journalists, appeared on NHK World-Japan to discuss sports in the Covid-19 era.

Opinion | Death Came for the Dakotas

Opinion | A Poet’s View of the Year: Longing for Our Own Lives