We’re covering Carrie Lam’s future, the precarious state of China’s trade goals and a Holocaust survivor reunion that might be among the last of its kind. 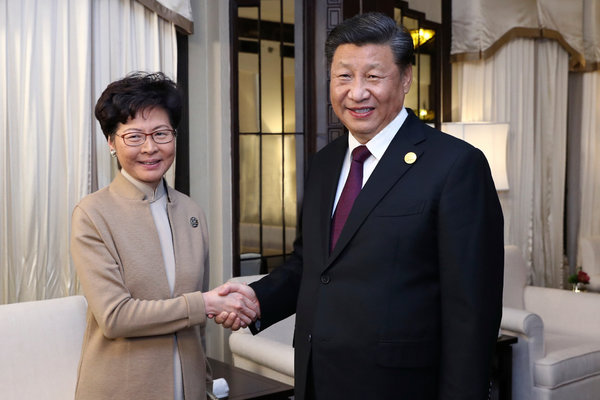 The Chinese leader, Xi Jinping, gave a public endorsement of Hong Kong’s chief executive, his most direct comments yet on the 22-week-long protest movement in the territory.

“The central leadership has high confidence in you,” Mr. Xi said, praising Mrs. Lam’s efforts at “halting the violence and restoring order” as the two met Monday night in Shanghai, according to Xinhua, the official Chinese news agency.

At the same time, Mr. Xi reminded Mrs. Lam of Beijing’s support for a stern approach to the protests, which have grown increasingly violent in the face of heavy-handed policing.

Context: Mrs. Lam’s political future depends, in part, on the effective blessing of the Chinese leader — particularly amid persistent rumors that he would pressure her to step down after the protests subside.

That may mean she is more likely to agree to demands from China to increase loyalty to Mr. Xi’s government, like the proposed “patriotic education” for youth and government workers.

On the ground: A 22-year-old student remained in critical condition after reportedly falling from a building when the police fired tear gas this weekend. Last night, the police fired water cannons at hundreds of protesters wearing Guy Fawkes masks, a global symbol of protest.

President Xi Jinping endorsed free trade in a speech in Shanghai on Tuesday, even as his government attempts to end the punishing trade war with the U.S. and to open up new markets seem to be faltering.

“Economic globalization is a historical trend,” he said at the opening of the second annual China International Import Expo. “Although there are sometimes some waves going backward, and even though there are many shoals, the rivers are rushing forward and no one can stop them.”

Behind the scenes: Chinese and American negotiators are still scrambling to work out the details of a “first phase” trade agreement that the two sides agreed to last month. The Trump administration is considering scrapping existing tariffs on Chinese goods in an effort to seal the deal.

China’s hopes of securing a free-trade agreement with more than a dozen countries in Asia, meanwhile, hit a setback after India — wary of a flood of Chinese goods entering its market — pulled out on Monday.

In the U.S.: The overall trade deficit continued to widen in the first nine months of 2019, suggesting that President Trump’s global trade wars have not had the desired effect of closing that gap.

Russia sets its sights on Libya

About 200 Russian fighters have arrived in Libya in the last six weeks, as part of a broad campaign by the Kremlin to reassert its influence across the Middle East and Africa.

After years of behind-the-scenes support for a would-be Libyan strongman, Moscow is now much more directly pushing to shape the outcome of the country’s messy civil war, bringing in advanced Sukhoi jets, coordinated missile strikes, precision-guided artillery and snipers.

It’s the same playbook that made Russia the biggest foreign influence in Syria’s war.

What Russia wants: The Kremlin has intervened on behalf of the militia leader Khalifa Hifter, who is also backed by the U.A.E., Egypt, Saudi Arabia and, at times, France. He is at war with pro-government militias from western Libya who are nominally supported by the U.S. and other Western powers, but whose only real backer is Turkey.

Two-tiered war: Turkey and the U.A.E. have turned Libya into the first war fought primarily by clashing fleets of armed drones. But on the ground, small militias clash in a handful of deserted districts on the southern outskirts of Tripoli.

If you have seven minutes, this is worth it

French diplomacy in a Shanghai museum

France’s strategy of using “museum diplomacy” to raise its profile overseas took a bold step forward with the opening of the Pompidou Center’s ambitious new outpost in Shanghai — a 27,000-square-foot exhibition space housed on a miles-long waterfront cultural center, pictured above.

Those involved insist its creation is more about Sino-French dialogue than profit. But the massive museum is likely to come up against the same censorship issues that other art institutions in the country face.

Mexico: At least nine members of a Mormon family, including six children, were killed by gunmen believed to be tied to organized crime, relatives said. Mexico has already been reeling from record violence this year, including a string of attacks in the last month.

Iraq protests: At least 13 protesters were killed on Monday and Tuesday, as Iraqi security forces abandoned weeks of comparative restraint. The protesters, who have congregated in the hundreds of thousands, are marching against Iran’s growing influence.

Britain: Jacob Rees-Mogg, a Conservative who leads the House of Commons and is an ally of Prime Minister Boris Johnson, apologized amid uproar over his comments suggesting that the victims of the fatal Grenfell Tower fire in 2017 died because they lacked the “common sense” to defy firefighters’ orders and flee.

TikTok: Li Yuan, our New New World columnist, takes a close look at the video platform and how its rising popularity in the U.S. might doom it, as American officials increase scrutiny of Made-in-China technology products.

Snapshot: Above, Yayoi Kusama’s balloon, “Love Flies Up to the Sky,” on a test flight before it makes its debut in Macy’s annual Thanksgiving Day Parade in New York City — the latest feat by the artist who is seeing a surge of interest around the world.

Flying taxis: At least 20 companies around the world are testing machinery, laying the groundwork and starting discussions with government officials in a high-stakes race to roll out flying taxis. But engineering and technical challenges persist.

Holocaust reunion: A 92-year-old Greek woman, Melpomeni Dina, was reunited with two surviving members of a Jewish family she helped save from the Nazis during World War II. Given the passage of time, the reunion might be the last of its kind.

Popeyes chicken: Maryland authorities are searching for a man who they say fatally stabbed someone for cutting in line during the much-hyped return of the fast-food chain’s popular chicken sandwich.

What we’re reading: This essay in GQ-UK, by a reporter for The Times of London who found a British girl in Syria, an ISIS bride from the age of 15. Anthony Loyd reflects on “how his interview wrecked what was left of her life,” writes our national correspondent Ellen Barry.

Cook: In need of something outrageously good? Turn to this French onion macaroni and cheese.

Listen: The New York Police Department has created a podcast that delves into its most interesting cases.

Read: In some ways, Edith Wharton’s classic novel “The Age of Innocence” feels more current than ever. Elif Batuman explains.

Smarter Living: Here’s a step-by-step guide to cleaning your scuffed up white sneakers.

College football is wildly popular in the U.S., generating billions of dollars each year (though it doesn’t pay its athletes). At its start 150 years ago, the game looked almost nothing like it does today.

Rutgers and Princeton, two New Jersey colleges, faced off in the first-ever match on Nov. 6, 1869, before about 100 spectators. Each team had 25 men on the field, and the ball couldn’t be carried or thrown — players advanced by kicking or batting it with their hands and feet.

The rules had been established a few years earlier by the London Football Association — meaning they were a lot closer to what the rest of the world would call “football” and Americans would call soccer. The game also featured elements of rugby.

The play was frantic and rough, and the men wore no padding or helmets. At one point, a distressed professor waved his umbrella and shouted, “You will come to no Christian end!”

Princeton had more muscle, but Rutgers was faster and better organized, according to an account in Rutgers’s student newspaper. Rutgers won, 6-4.

Thank you
To Mark Josephson and Eleanor Stanford for the break from the news. Tom Wright-Piersanti wrote today’s Back Story. You can reach the team at [email protected]

P.S.
• We’re listening to “The Daily.” Our latest episode is on how Democratic presidential candidates might fare in the general election.
• Here’s our Mini Crossword, and a clue: Santa’s little helper (three letters). You can find all our puzzles here.
• The New York Times Book Review, working with the New York Public Library, named the 10 Best Illustrated Children’s Books of 2019.