We’re covering a historic contraction in Australia’s economy, why some Kashmiri moderates feel betrayed and new evidence of Russian meddling in the U.S. presidential election. 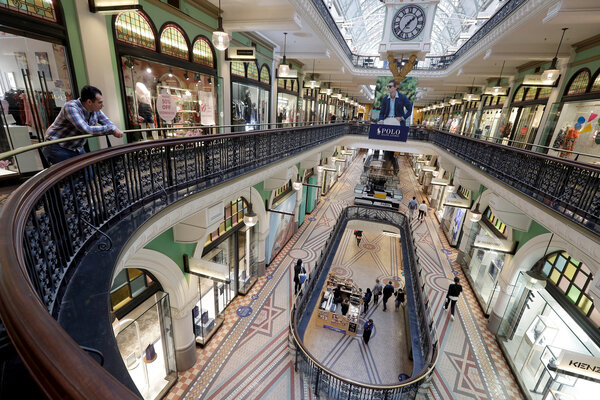 After nearly three decades of growth, Australia fell into recession after its economy shrank 7 percent in the second quarter, the government said on Wednesday. The country that avoided stumbling during the 2008 global financial crisis could not escape the ravages of Covid-19.

The drop in quarterly G.D.P. is the largest since record-keeping began in 1959. Australia’s tourism and education were hit hard by virus restrictions, as was domestic spending on hotels and restaurants. The downturn came despite over $150 billion in stimulus spending.

In addition, Victoria’s state of emergency was extended by six months on Wednesday, giving officials broad power to impose virus-related restrictions as needed. “The road ahead will be long,” said the country’s treasurer, Josh Frydenberg.

South Koreans have been proud of their country’s handling of the outbreak, with its two-pronged approach to fighting the virus while keeping the economy running. But now that strategy seems more precarious, with a second wave spreading through Seoul.

Direct international flights to Beijing will gradually resume, Chinese aviation authorities said Wednesday. Those from Thailand, Cambodia, Pakistan, Greece, Denmark, Austria, Sweden and Canada are the first to be allowed back.

Former Prime Minister Silvio Berlusconi of Italy has tested positive for the virus.

For decades, some leaders in Kashmir have advocated peace in the disputed territory and acceptance of some degree of Indian authority, hoping to serve as a bridge between India and Pakistan.

Now, a little more than a year after India revoked Kashmir’s statehood and upended years of policies that granted Kashmiris some autonomy, these moderates feel betrayed, disillusioned and disenfranchised.

Prime Minister Narendra Modi seems to have further undermined those who were sympathetic to the Indian state and who were already targets of Kashmiri militants. Without them, experts say, the Indian government will find it harder to bring peace and stability to the region.

On the ground: Men and women who had worked in the state government and cooperated with India say that Kashmir now feels more like an occupied territory, where police officers and government functionaries who are mostly not Kashmiri make decisions and enforce rules. “We are living under the smokescreen of a democratic system,” said a former education minister who was released from prison in June. “I don’t want to be part of it now. That would be treachery.”

The Russian group that interfered in the 2016 U.S. presidential election is at it again, using a network of fake accounts and a website set up to look like a left-wing news site, Facebook and Twitter said on Tuesday.

The disinformation campaign by the Kremlin-backed group, the Internet Research Agency, is the first public evidence that the agency is trying to repeat efforts from four years ago and help President Trump win re-election. This time, there’s a twist: The agency hired Americans to write for its website.

If you have 6 minutes, this is worth it

Relying on students to police each other

As some colleges reopen in the U.S. despite a raging coronavirus pandemic, students returning to campuses are feeling pressure to tell university administrators if they see their classmates breaking virus restriction rules. A few schools, including Colgate and the University of Colorado Boulder, have encouraged students to inform on their peers.

Snitching is the price of keeping campuses safe, some say. “I’m not going to be having my life put at risk because people decided to be selfish,” a graduate student at New York University said. “These rules are for the good of everyone here.”

Aleksei Navalny: The German government said that toxicology tests showed the Russian opposition leader was poisoned with Novichok, a nerve agent that was also used against a former Soviet spy in Salisbury, England, in 2018.

Prince Harry and Meghan: Six months after they quit the royal family, the Duke and Duchess of Sussex signed a multiyear deal with Netflix to make documentaries, feature films, shows and children’s programs. Meghan has made it clear that she has no plans to return to acting.

Charlie Hebdo trial: A court in Paris has begun hearings in the January 2015 attacks that killed 17 people, starting with a daytime assault on the offices of the satirical magazine, followed by a shootout and a hostage taking at a kosher supermarket. The events traumatized France.

Japan’s convenience stores: Store owners, who have been fighting for a break from their 24-hour, 365-day-a-year operations, may be closer to shorter hours. Japan’s Fair Trade Commission on Wednesday warned the top chains to improve the treatment of franchisees.

Kenosha: President Trump visited the city in Wisconsin roiled by unrest after the police shooting of Jacob Blake, a 29-year-old Black man. The president did not mention Mr. Blake’s name or meet with his family, but instead offered support for law enforcement and local shops.

Snapshot: Above, the Moria migrant camp on the Aegean island of Lesbos, which hosts nearly 12,000 people. Greek authorities have reported the first case of the coronavirus there, raising concerns of spread in a vulnerable population.

What we’re reading: The September issue of Vanity Fair, titled “The Great Fire.” The cover features Breonna Taylor, the issue is guest-edited by Ta-Nehisi Coates, and the writing is a tour de force on the state of American race relations.

Watch: The documentary “Robin’s Wish” pays tribute to Robin Williams and sheds light on Lewy body dementia, which was diagnosed in him after his death.

Do: If you want to walk easily and well as you age, you may need to do more than just stroll. An eye-opening new study of older walkers and cyclists found that people who cycle for exercise can walk more efficiently than people whose primary exercise is placid walking.

At Home has our full collection of ideas on what to read, cook, watch, and do while staying safe at home.

How Lukashenko has kept power in Belarus

Large-scale protests demanding an end to President Aleksandr Lukashenko’s rule have roiled Belarus for four weeks, since an election dismissed as a sham gave him his sixth term. Ivan Nechepurenko, who has been reporting there, spoke to The Daily about how the president amassed such power.

Lukashenko says that he created Belarus. What does he mean?

Well, it is accurate in a sense, because, of course, he’s the first president of this country. Belarus became independent in 1991, when the Soviet Union collapsed, and people were euphoric about acquiring independence.

But shortly after, they realized that democracy also brings chaos. The economy is not working well because as the rest of the Soviet Union, the Belarussian economy was a planned economy with no market, with prices set up from a single center from Moscow, essentially.

Who is Lukashenko in this moment as people in Belarus are struggling to figure out what a post-Soviet Belarus even looks like?

He’s someone who comes from a very modest background and who rises quickly through the ranks to become a collective farm manager and then engages in politics. And he seems to be very driven and very charismatic. And people listen to him. He attempts to talk to them directly by telling them that I can take your lives back, to where they were when you enjoyed them so much, when the Soviet Union was kind of at the height of its power.

How do the people of Belarus respond to this message, this kind of backward-looking, nostalgic Soviet message?

He wins the election. He increases people’s salaries. And he cancels many of the market economy reforms. People are very happy because they feel the change immediately, and their standards of living improve.

But what people fail to notice is the main reason he’s able to deliver them. Russia, being an energy superpower, was essentially giving Belarus large amounts of oil that Belarus could refine and sell to European markets and keep the difference. So by doing that, Russia was essentially trying to tie Belarus to Moscow.

P.S.
• We’re listening to “The Daily.” Our latest episode is about Belarus.
• Here’s our Mini Crossword, and a clue: Had in one’s hands (four letters). You can find all our puzzles here.
• Gabriel Sanchez, most recently BuzzFeed’s senior photo essay editor, will help produce visuals for our Cooking app and food report.

Opinion | How Culpable Is Trump, and How Dangerous is QAnon?

Opinion | Facebook Has Been a Disaster for the World

Opinion | New York, a City on Its Own