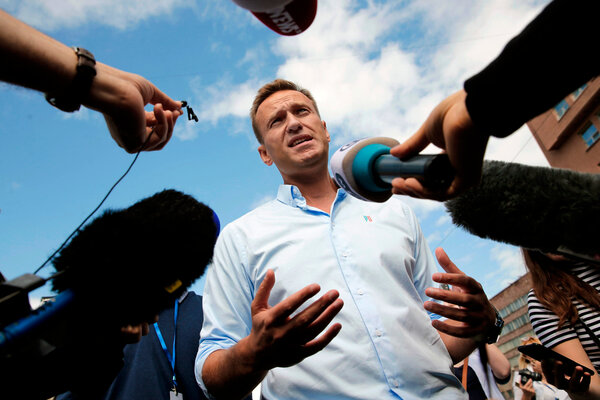 After Germany’s revelation that the Russian opposition leader Aleksei Navalny was poisoned with a nerve agent from the Novichok family, officials and state news media commentators in his home country have responded with an array of improbable scenarios. They include the notion that Mr. Navalny had poisoned himself, that he and his supporters were “putting on a big theater play,” that an enemy of Russia had poisoned him and that the poisoning never actually happened.

Such flurries of evidence-free theories have become standard responses to accusations of wrongdoing by Moscow — whether it’s election meddling, military interventions or assassinations. The formal Foreign Ministry response has been to accuse Germany of making claims without producing “any facts at all.”

Side effects: Evidence of Mr. Navalny’s poisoning has raised the pressure on Chancellor Angela Merkel of Germany to cancel an $11 billion Russian gas pipeline. Now, even members of her own party have insisted that the chancellor should respond by calling off the Nord Stream 2 project.

Former Vice President Joe Biden traveled on Thursday to Kenosha, Wis., where he met privately with relatives of Jacob Blake, the Black man who was shot by a white police officer. He also spoke by phone with Mr. Blake, who his family says is paralyzed and remains in the hospital, and held a listening session with activists, clergy members and others from the community.

The trip was meant to draw a contrast with President Trump, who did not meet with Mr. Blake’s family when he visited Kenosha this week. A lawyer for the family who listened to the meeting said Mr. Biden had extended to Mr. Blake “a sense of humanity, treating him as a person worthy of consideration and prayer.”

Speaking at a rally in Pennsylvania last night, Mr. Trump mocked Mr. Biden for wearing a mask and again encouraged his supporters to try to vote twice if they vote by mail. Voting twice is illegal.

The latest polls: Mr. Trump continues to trail Mr. Biden by a significant margin both nationwide and in critical battleground states, The Times’s Nate Cohn writes.

Facing its worst recession in decades, France announced a 100 billion-euro ($118 billion) stimulus plan on Thursday aimed at returning its battered economy to pre-crisis levels by 2022. The plan would hand large tax cuts and hiring subsidies to companies in hopes of stimulating investment and creating jobs.

It follows the €400 billion made available by the government to keep thousands of businesses out of bankruptcy and millions of people employed. Around a third of the new funding is intended to help the country transition to so-called green technology, supporting development and job creation, particularly in hard-hit regions.

But a new wave of coronavirus infections is rolling across France, and with it the prospect of a protracted downturn. The country reported more than 7,000 new cases on Wednesday. More than 30,000 people have died.

Dire warnings: Spain’s capital is once again at the epicenter of its virus epidemic, accounting for almost one-quarter of the 1,830 patients hospitalized in the country this past week. Isabel Díaz Ayuso, a politician who leads the Madrid region’s government, issued an alarming prediction. It is probable, she said, “that all children would get infected, one way or another.”

India reported 83,883 new cases on Thursday, breaking its global record. It has the world’s third-highest number of cases and deaths, after the United States and Brazil.

A surge in pandemic-related government borrowing has put the United States in a position not seen since World War II: To pay off its national debt this year, the country would have to spend almost as much as its entire annual economy.

The Venice Film Festival, the first large movie extravaganza to take place since the pandemic began, opened on Wednesday with numerous safety measures in place.

More than 7,000 health care workers have died from Covid-19 around the world, according to Amnesty International, up from a July 3 tally of 3,000.

Can the mail boat stay afloat?

Since 1905, generations of one family have delivered letters, packages and passengers to the islands of Penobscot Bay, Maine. But this year is likely to be the last because of the hardships imposed by the Covid-19 crisis.

The mail boat, above, is one of 24 water routes funded by the U.S. Postal Service. Over the decades, its winter runs have dwindled to once a week. But during the summer, the muttering of a four-stroke engine as it transits the bay is a presence throughout the day. “It’s vital to this community,” said one resident “I don’t know how we would live without it.”

Slovakia murder: After an eight-month trial, Marian Kocner, one of the country’s most prominent businessmen, was acquitted of ordering the 2018 killing of an investigative journalist that set off anticorruption protests.

Facebook and the U.S. election: The social network said on Thursday that it planned to ban any new political ads on its site in the week before the Nov. 3 election to reduce voter disinformation.

Cattle ship: New Zealand has suspended live cattle exports after a livestock vessel sank off the coast of Japan with nearly 6,000 heads of cattle and more than 40 crew members onboard. Only one person is known to have survived.

Snapshot: Above, the Boughton sisters in Memphis, where a neighbor had just distributed free school lunches. In the U.S., nearly one in eight households doesn’t have enough to eat. This interactive report on food insecurity captures the routines of Americans struggling to feed their families as the pandemic takes away their jobs and threatens their health.

Israel: Prime Minister Benjamin Netanyahu privately went along with a plan for the Trump administration to sell advanced weapons to the United Arab Emirates despite publicly saying later that he opposed the arms deal, according to officials familiar with the negotiations.

What we’re reading: This gloriously briny tale, from Wired, about sea creatures’ extraordinary ability to follow the moon’s rhythms — even isolated from every obvious environmental cue.

Cook: Creamy pasta without any of the cream. The secret? Puréed corn and sautéed scallions mixed with a lot of Parmesan and red chile flakes. Lemon juice adds brightness to the summery dish.

Listen: We asked artists to choose the five minutes or so they would play to make their friends fall in love with the sweet, songful violin. Listen to their choices.

Do: Here’s a guide to what houseplants to buy, and how to care for them, from the most dependable to the trickier types.

Have fun staying at home with lots of ideas from our At Home collection on what to read, cook, watch and do.

Donald McNeil, our infectious-diseases reporter, has been tracking developments in the coronavirus outbreak in the U.S., the world’s worst with over six million cases and 185,000 deaths. He spoke to my colleagues from the Coronavirus Briefing about what lies ahead.

We’ve been warned about a “fall wave” for a long time, but then we had a bad summer wave. What most worries you about the fall?

Autumn really worries me. Outbreaks are exploding at colleges all across the nation. There may be fewer deaths because students are young — but professors aren’t.

And soon, chilly weather will drive people indoors, where studies suggest you are 20 times more likely to get infected. By midwinter, if we aren’t careful, the death toll could head back up toward its April apex.

How will celebrating the holidays be different this year?

No American wants to hear this, but experts say it probably won’t be prudent to have big indoor family gatherings for Rosh Hashana, Thanksgiving or Christmas. It’s sad, but I don’t see a safe option — especially for families with a child away at school. When college towns become epicenters, you really don’t want students to come home and unwittingly infect their families. And students need to consider this: Yes, it’s miserable to miss a family holiday — but could you forgive yourself if your grandmother died because of you?

What scientific developments are you following most closely?

Scientists I talk to are optimistic about monoclonal antibodies. One called them “convalescent plasma on steroids.” The best antibodies are cloned and grown in cell broths. Small doses might act like vaccines that protect for a few weeks. If they do, getting them to high-risk Americans — medical workers, nursing home patients and the families of the infected — could blunt the epidemic. But they can’t be grown in bulk quickly or cheaply, and F.D.A. approval for prophylactic use is uncertain.

That’s it for today’s briefing. See you next week.

To Melissa Clark for the recipe and to Theodore Kim and Jahaan Singh for the rest of the break from the news. You can reach the team at [email protected]

P.S.
• We’re listening to “The Daily.” Our latest episode features an interview with Jimmy Lai.
• Here’s our Mini Crossword, and a clue: “Pizzeria appliance” (four letters). You can find all our puzzles here.
• Our audience team announced new global moves that are part of its expansion.

Opinion | The Rise of Remote Work Can Be Unexpectedly Liberating

Opinion | What Do We Do When Everything Is Coming Apart?