Home » Analysis & Comment » Opinion | Will There Be a Biden Comeback?

Opinion | Will There Be a Biden Comeback? 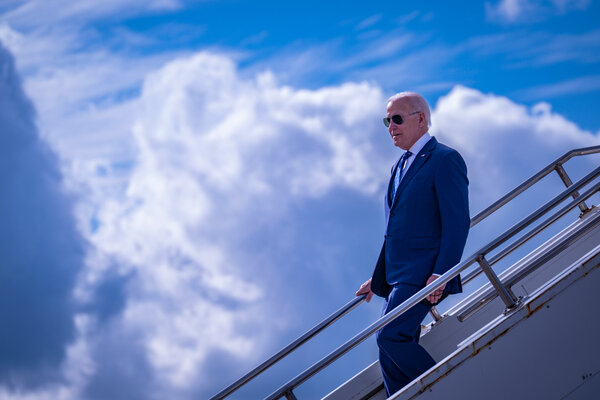 Something unusual happened to Joe Biden this week. A reputable poll, from The Economist and YouGov, showed him with a positive job approval rating — even hitting 50 percent approval among registered voters, against 47 percent disapproving.

Maybe the poll was an outlier, a blip; Biden’s approval numbers have improved since his summertime nadir, but his polling average is still below 45 percent. Maybe any improvement will be undone by further revelations about stashed classified documents from his V.P. days — though it will be hard to top the comedy value of some of the papers being in the garage with his Corvette.

But as congressional Republicans gear up for a year of internal knife fights and fiscal brinkmanship, it’s worth considering what it would take for a true Biden comeback, a return to actual popularity.

Before the midterms I tried to identify three original sins in the Biden administration — three freely chosen, unnecessary courses that contributed to the president’s underwater numbers. They were the White House’s early decisions to limit energy production and roll back some Trump immigration policies (which were then followed by the gas-price spike and the border crisis), the surfeit of spending in the American Rescue Plan that contributed to the inflation surge and the failure to show any actual moderation on cultural issues to match Biden’s original moderate-Catholic-Democrat brand.

One issue I didn’t include was the botched withdrawal from Afghanistan, both because it wasn’t a major issue in the midterm campaign and because I thought the withdrawal itself was a necessary and gutsy decision, notwithstanding the disastrous execution. But if you look at the arc of Biden’s approval ratings, the fall of Kabul looks like a major inflection point, a moment that sowed the first serious doubts about the administration’s competence.

So envisioning a Biden comeback requires imagining these liabilities being overcome or reversed, or just having their salience diminished. On the economy, such a scenario would run like this: The Republican House snuffs out any possibility of new inflationary spending, inflation continues to diminish without unemployment surging, China’s reopening helps normalize the global economy, Putin’s energy weapon proves to be a one-off blow rather than a continuing drag, and we get through this strange post-pandemic period without a real recession.

On foreign policy, the Biden best case is probably further gains for the Ukrainians in the spring and then some kind of stable cease-fire, which would enable him to take credit for blunting Russian aggression and also successfully managing the risks of World War III. We may get more of a bloody stalemate instead, but the White House’s handling of the Ukraine war is probably its most successful policy to date; if it still looks successful in a year’s time, the memory of the Kabul breakdown should be fully washed away.

On immigration and the border crisis, the Biden administration clearly thinks it’s pivoting rightward with new restrictions on asylum; the political effectiveness of the policy, though, will turn on whether it actually succeeds. On other cultural issues, meanwhile, it seems unlikely that Biden will execute any notable pivot — but the White House can hope that a divided government will effectively ease voter anxieties about wokeness without the administration needing to make any enemies to its left.

The role of congressional Republicans generally is key to the recovery scenario. The Biden administration can look back on successful political rebounds by Bill Clinton and Barack Obama that were clearly mediated by G.O.P. fecklessness. On the evidence of Kevin McCarthy’s speakership to date, history may be returning to those grooves.

But with this important difference: Clinton and Obama were unusually talented politicians in the prime of their political lives, while Biden is something else — a likable-enough political insider who’s now conspicuously too old for his job.

Occasionally this reality can be oddly advantageous for the White House. In cases like the classified-document revelations or the Hunter Biden imbroglios, the idea of Biden doing something shady accidentally or cluelessly, rather than with conscious corruption, is more plausible than in prior presidencies.

But mostly Biden’s age creates challenges that the Clinton and Obama administrations didn’t have to worry about. When events turn against his administration, as they did in 2021 and certainly could again in 2023 if the above scenarios don’t pan out, this president can look especially overmastered, especially ill-equipped to lead or turn the ship around. And even when things are going relatively well — even in a clear rebound scenario — the shadow of Biden’s diminished capacities may still be a drag on his support.

Presuming, that is, that the Republicans find an opposing candidate who draws clear contrast in vigor and capacity. If they return instead to a certain former president whom Biden beat once already — well, that’s the strongest comeback scenario, and the clearest path to another term.