Opinion | Trump, the Infallible Weatherman, and His Defenders 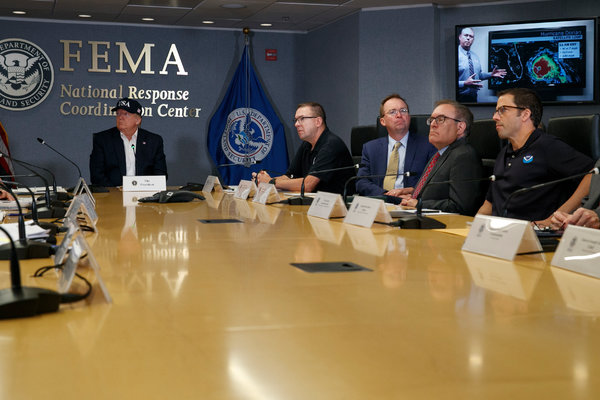 President Trump’s remarks about Hurricane Dorian’s threat to Alabama could have been explained as a simple mistake, but instead they revealed once again the elaborate apparatus that works to preserve one of this president’s most important values — his own infallibility.

In the face of lies and misstatements, advisers, cabinet members and political appointees, whether freely or cajoled, rally to his defense. Even G.O.P. members of Congress remain mute and complicit, too fearful of poking the monster of insecurity, who will always seek refuge in the cave of infallibility.

A 2017 New Yorker cartoon had the TV weather forecast split into “Democratic weather” and “Republican weather.” Back then, this was satire.

Talk about a tempest in a teapot! Never has so much ink been wasted for so long over such an absolutely inconsequential matter as whether a hurricane, which is now gone, might come to Alabama. I guess if it can be used to heckle the president, the press won’t let it go.

If I’m considering having a picnic with family and friends next weekend, should I consult the National Oceanic and Atmospheric Administration weather forecast, as I would have before now, or should I instead contact the White House for the “correct” forecast?

“Time to Rein In Hospital Excesses,” by Elisabeth Rosenthal (Op-Ed, Sept. 2), doesn’t reflect the reality that America’s hospitals — nearly a quarter of which operate in the red — generally treat sicker patients with more complicated and chronic conditions than those in other settings.

In addition to absorbing the steep burden posed by drug companies’ soaring price increases, hospitals and health systems, according to the federal government, are reimbursed far less than the cost of providing care to Medicare and Medicaid patients. And given their core belief that patients should never forgo care because of cost, hospitals have provided more than $620 billion in uncompensated care since 2000.

The article relies on several seriously flawed studies and extremely broad claims about the care hospitals provide and the role they play in their communities. In doing so, it ignores the results of hospital efforts to slow price growth to under 2 percent in recent years despite the fiscal challenges they face.

As hospitals build on our progress to promote affordability and reduce cost, we encourage large drug and insurance companies enjoying record profits to join us.

Rick Pollack
Washington
The writer is president and chief executive of the American Hospital Association.

In “How Do You Raise a Literature Lover?” (Sunday Review, Sept. 1), Pamela Paul wisely underscores parents’ critical role in helping children develop a love of reading. A mother’s role is particularly important, as her level of education is the No. 1 determinant of her children’s future academic success.

More than 36 million American adults lack the literacy skills necessary to read, write and comprehend at a basic level, never mind support their children as growing readers by sharing bedtime stories or setting an example of reading for enjoyment.

These unmet literacy needs prevent them from fulfilling their critical role as their child’s first and best teacher.

This issue affects our entire society, with multigenerational consequences. It should be on the hearts and minds of every American. We must work together to ensure that citizens of all ages have the opportunity to read, write and comprehend in order to navigate the world with dignity.

British A. Robinson
Washington
The writer is president and chief executive of the Barbara Bush Foundation for Family Literacy.

What Can I Do?

Now I am told (Book Review, Aug. 28) that I shouldn’t watch Netflix because it takes up a disproportionate amount of bandwidth.

I’m just going to sit here and stare at my dirt yard. Is it O.K. if I turn on a light?