Home » Analysis & Comment » Opinion | The Encroachment of the Unsayable

Opinion | The Encroachment of the Unsayable

In January, in what now seems like a bygone age, the writer George Packer delivered a memorable speech, “The Enemies of Writing,” for the honor of winning the Hitchens Prize. “Why is a career like that of Christopher Hitchens not only unlikely but almost unimaginable?” Packer asked. “Put another way: Why is the current atmosphere inhospitable to it? What are the enemies of writing today?”

For a sense of what Packer meant, consider that in 2007 Hitchens wrote — and Vanity Fair published — an essay titled, “Why Women Aren’t Funny.” It was outlandish, but also learned, and maybe not entirely serious. Imagine that ever running today, in Vanity Fair or any other mainstream publication. Or take another Hitchens column from the same year, in which he called Islam “simultaneously the ideology of insurgent violence and of certain inflexible dictatorships.” Try finding a line like that today in Slate, where it first appeared.

What these examples show, and what Packer brilliantly captures in his speech, is what might be called the encroachment of the unsayable. It’s an encroachment that, in its modern form, began with the Ayatollah Khomeini’s 1989 fatwa against Salman Rushdie for the publication of “The Satanic Verses,” which was deemed blasphemous. In short order, the world got to see who in the liberal world really had the courage of liberalism’s supposedly deepest convictions.

Since that episode — which resulted in nearly a decade of hiding for Rushdie, the killing of his novel’s Japanese translator and the shooting of his Norwegian publisher— there have been all-too-many similar moments: the slaying of the Dutch director Theo Van Gogh in 2004, the Danish cartoon affair in 2005-06, the “Charlie Hebdo” massacre in 2015, and, last week, the beheading of French teacher Samuel Paty by a Chechen refugee, according to authorities, for the sin of showing his students two caricatures of the Prophet Muhammad as part of a lesson on free speech. 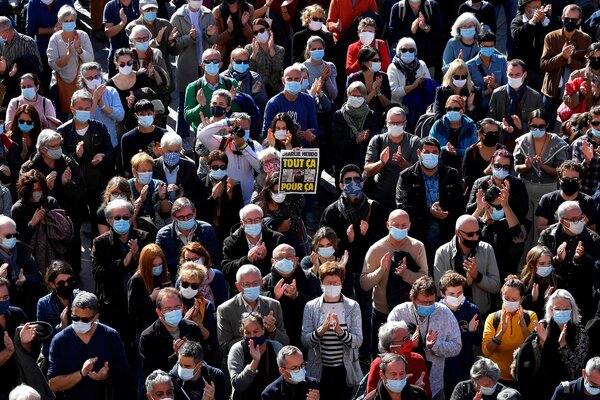 As in all the other instances, the immediate reaction has been heartbreak, defiance, solidarity — followed, typically, by a quiet moral concession. Often, this takes the form of a “yes-but” response in which the crime is condemned while also viewed as an answer to a provocation that is itself indefensible.

After the Rushdie incident, former President Jimmy Carter published an op-ed in The Times that called Khomeini’s death sentence “abhorrent” but added that Rushdie’s book “is a direct insult to those millions of Muslims whose sacred beliefs have been violated.” After PEN American Center chose to honor Charlie Hebdo for its Freedom of Expression Courage Award, some members of PEN America protested the choice because the slain cartoonists had poked fun at the beliefs of a “marginalized, embattled and victimized” minority.

The upshot of these controversies has been a kind of default to a middle position that goes roughly as follows: Fanatics shouldn’t kill people, and writers and artists shouldn’t needlessly offend fanatics. It’s a compromise that is fatal to liberalism. It reintroduces a concept of blasphemy into the liberal social order. It gives the prospectively insulted a de facto veto over what other people might say. It accustoms the public to an ever-narrower range of permissible speech and acceptable thought.

And, as Packer notes, it slowly but surely turns writers, editors and publishers into cowards. Notice, for instance, that I have just described the suspect in Paty’s murder as a “Chechen.” Why? Because it’s accurate enough, and it’s not worth dealing with the choice and precision of a single adjective.

It isn’t entirely clear whether there’s a causal connection between the way so many Western liberals have tried to dance around the subject of religious fanaticism and other encroachments on socially acceptable speech. But the two have moved in tandem, with equally destructive results. Our compromised liberalism has left a generation of writers weighing their every word for fear that a wrong one could wreck their professional lives. The result is safer, but also more timid; more correct, but also less interesting. It is simultaneously bad for those who write, and boring for those who read. It is as deadly an enemy of writing as has ever been devised.

In his speech, Packer notes that good writing is “essential to democracy, and one dies with the other.” The corollary to this thought is that the more some ideas become undiscussable, the more some things become unsayable, the more difficult it becomes to write well. We are killing democracy one weak verb, blurred analogy and deleted sentence at a time.

I should be more precise. When I say “we,” I don’t mean normal people who haven’t been trained in the art of never saying what they really think. I mean those of us who are supposed to be the gatekeepers of what was once a robust and confident liberal culture that believed in the value of clear expression and bold argument. This is a culture that has been losing its nerve for 30 years. As we go, so does the rest of democracy.