On this year’s win-a-trip journey, Nick Kristof and I spent eight days visiting clinics and homes, exploring schools and fields, and pushing through mud and road blockades in Paraguay and Guatemala. We found desperation, hope and also a few lessons that I take with me. Here’s some of what I learned: 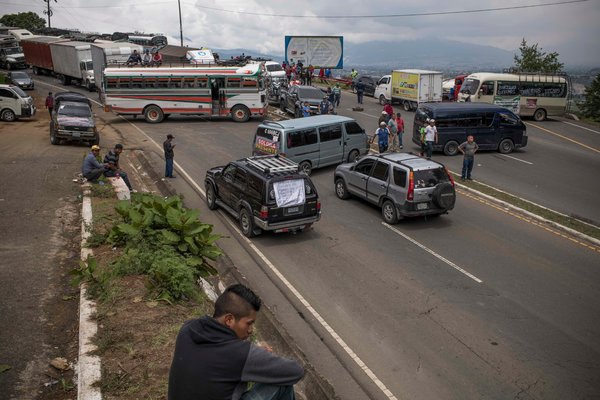 By the time Nick and I got stuck in a road blockade in western Guatemala, protesters had already spent two full days lying on top of buses parked horizontally across lanes of traffic, blasting music from speakers lodged in the back of pickups. Their demand was simple: that the government commit to fixing damaged roads that they said left regions of the country dangerously disconnected from health, educational and economic services.

Eulalia Maribel Francisco Juan, 26, one of the protesters, told me that women, especially indigenous women, were left particularly vulnerable by poor road conditions. In areas with poor road conditions, she said, women like her would rather deliver at home than accept the risk that they could die on the way to the hospital.

I had tended to think of social spending as support for clinics and schools, but it was obvious in both Guatemala and Paraguay that a clinic doesn’t do any good when the roads are so poor that people can’t reach it. Likewise, farmers in poor countries often can’t access fertilizer or good seeds — or sell their crops easily after harvest — because roads, ports and other infrastructure are so weak. This trip was a striking reminder that the road to development needs to be a well-paved one.

For millions, cooking dinner can be deadly

Where’s the worst air pollution? In Beijing? Delhi? No, it’s in kitchens in the developing world.

Scientists measure air pollution through the concentration of particulate matter — particulate matter with a diameter of 2.5 microns or less being especially dangerous because of its ability to penetrate the lungs and respiratory system. In cities like Delhi and Dhaka, this concentration averages yearly around 100 micrograms per cubic meter, ten times the World Health Organization guidelines.

But the people suffering from the worst air quality are not commuters in polluted capital cities — they’re kneeling over a fire, cooking to feed their families. These people, the victims of indoor air pollution, are disproportionately women and children and regularly experience air more than 10 times more densely packed with particulate matter than the air during peak pollution episodes experienced by cities like Delhi.

I saw the peril in the one-room, two-bed house of Maricela Gómez Torrez, 23, which she shares with 13 other people. The home’s central feature is an indoor cooking fire, whose smoke is easily trapped by four walls and often bothers its residents, especially the children and infants. Imagine being in a room with about 15 people smoking cigarettes, and you get the idea.

The U.N. has identified improving access to clean fuel and cooking technology within its Sustainable Development Goals. Still, this is easier said than done. “Clean cookstoves” were hailed as a silver bullet 10 years ago, but researchers found that at least the early versions didn’t help in real-world conditions. Experts are now trying to produce better versions.

In the meantime, some researchers, like Kirk Smith of U.C. Berkeley, have shifted focus toward expanding access to liquefied petroleum gas (or gas that contains propane and butane) as “transition fuel” with the ultimate goal of using electricity powered by renewable energy. “Don’t try to make the available clean,” Smith told me. “But make the clean available.”

Don’t make it harder to migrate, make it easier not to migrate

Marta Mendoza Raymundo, 24, wants to migrate to the U.S. so her four-year-old son has a chance to finish school.

Mendoza Raymundo is aware of the risks of migrating — she’s heard about children who are separated from their parents in the process of migration, and she acknowledges it’s a scary possibility. But she remains undeterred.

“What can we do?” Mendoza Raymundo asked.

Mendoza Raymundo is a single mother with only a fifth-grade education, and now she earns just $30 or $40 a month, often worrying about whether her son will have enough to eat.

She voiced the sentiments of many people we met throughout our time in Guatemala — she didn’t want to migrate and leave behind everything she knows. But it’s hard for her to envision any future if she stays.

If the U.S. wants to reduce migration, it essentially has two choices: weaken the factors that pull people to the U.S. (including by making it more difficult to reach the U.S.), or weaken the factors that push them away from their home countries. Through years of policies such as Prevention Through Deterrence, and with recent policies such as Remain in Mexico, America’s government has tried to chip away at the incentives for coming to the U.S., but these approaches have often proved both ineffective and cruel. Instead, perhaps we should think about weakening the push factors behind migration by strengthening health, education, economic and justice systems in countries like Guatemala.

For Mendoza Raymundo, that would make a difference.

For Americans, saving money is straightforward: You deposit the money in your bank account. But about 1.7 billion people worldwide don’t have access to bank accounts, because they lack funds, or because it costs money to maintain an account, or because an account requires identification that they lack. The poor often have lumpy incomes — a payout once a year at the end of a harvest, or at the end of a temporary job picking coffee — yet when they receive this money, their only mechanism to save is to buy a few goats or to put the money under a mattress.

In both Paraguay and Guatemala, I saw a better way: savings groups.

Jeidy Funes, 20, and Victor Mérida, 20, a young couple with a newborn baby named Tatiana Nicole, were both members of the Mercy Corps savings group in the Guatemala village of Chichalum. They can deposit the money in the group’s lockbox, and then it is lent out to another group member, earning them interest.

A decade ago there was a lot of excitement about microlending, but rigorous studies found it not as effective as people had hoped. However, researchers have found that the other side of microfinance — microsavings — is very effective in helping people build better lives (although some research suggests it’s more successful for women than for men).

Funes and Mérida explained to me that the savings group had given them hope that they’d be able to provide their daughter with a better quality of life — without having to migrate.

“If we couldn’t go far, she has to go farther than us,” said Mérida.

Don’t get sick on the weekend

In rural Guatemala, communities are served by a health post — a small medical clinic, usually staffed by nurses, auxiliary nurses and sometimes medical students. While health posts provide services such as prenatal care, vaccinations and family planning, they lack staffing and resources.

Irma Domingo, 29, a nurse in the health post in Canquintic, Nentón, showed me a barren metal cabinet populated with only basic medications, noting regretfully that sometimes she had to send patients away without the medicine they needed.

Another challenge of the health posts is that they’re open only on the weekdays. If someone gets sick on the weekend, and they don’t have the money to travel to a health center or hospital in the surrounding area, they’re out of luck.

That’s what happened to Flori Micaela Jorge Santizo, 19. On a Saturday last December, her daughter, Vidalia, only a few weeks old, came down with a fever. By the time the health post reopened on Monday, Vidalia had died.

This was a crucial reminder that clinics and schools can only be as good as the resources and people that fill them — and health care certainly cannot be 9-to-5.

Education doesn’t solve everything — but it solves a lot

Plastered on the wall of an elementary school courtyard in Guatemala’s western highlands was a simple chart listing the number of girls and boys in each grade: 36 girls, 53 boys. Of the eight sixth graders, only two were girls.

Each girl missing from that chart reflected a terrible loss in her own right. But there’s also a loss for society: Universal secondary education (defined as 12 years of schooling) would lead to improvements in psychological well-being, health care decision-making, contraceptive use and agency, as well as reductions in intimate partner violence and children’s stunting and under-five mortality. It would also virtually eliminate child marriage and reduce early childbearing by up to three-fourths, according to the World Bank.

This is the benefit of girls’ education — it’s like a buy-one-get-one free sale, except you get many things free instead of just one.

Victoria Verón, 23, who herself had to drop out of school around third grade when her parents moved for work, has seen the powerful impact of girls’ education firsthand. In her community in northern Paraguay, she told me, girls are starting to have children and get married later than their mothers and grandmothers.

Mia Armstrong, a 2019 graduate of Arizona State University, is the winner of Nicholas Kristof’s 2019 “win-a-trip” contest, allowing a student to accompany him on a reporting trip and write about it for The Times. This is the final article she will write from the trip.