Opinion | Give Hong Kong the Autonomy It Was Promised

This is an article from World Review: The State of Democracy, a special section that examines global policy and affairs through the perspectives of thought leaders and commentators, and is published in conjunction with the annual Athens Democracy Forum.

It has been a devastating summer for most young people around the world. Because of the pandemic, concerts have been canceled, beaches closed and human interactions limited.

It’s a bit different for the youth in Hong Kong, who face not only loneliness because of a lack of social contact, but also a period of White Terror that started with the imposition of a far-reaching national security law by China. Since June 30, when it was introduced, the legislation has facilitated and accelerated Beijing’s political prosecutions in response to ongoing pro-democracy protests in the semiautonomous territory.

The law confers to Beijing and the local authorities reporting to it sweeping powers to prosecute individuals who are accused of committing acts of subversion, secession or collusion with foreign forces. The specific terms used in the text of the legislation, which are vague and left to the interpretation of those in power, leave room for manipulation and abuse, endangering our freedom of expression.

The uproar in Hong Kong began in earnest last summer, sparked by a proposed extradition agreement between the city and mainland China. More than one year on, the movement has evolved into an enduring fight against police brutality and for the genuine autonomy that Beijing promised Hong Kong following the territory’s handover from Britain to China in 1997.

Regardless of the cause, the Chinese government has never attempted to listen, let alone resolve the situation by responding to the protesters’ legitimate demands. Rather, following its “wolf-like” style of diplomacy on the world stage and heavy-handed domestic policies, the Chinese Communist Party has decided to quash the protests in an extreme manner, taking away rights we have long enjoyed.

On an almost daily basis we read in the news about protesters having their homes raided or facing arrests on absurd charges. The recent arrests of my friend and former colleague Agnes Chow and of Jimmy Lai, the famous pro-democracy media tycoon, have been shocking instances of political retaliation. Earlier this year I fled to London, fearing that the new law would be used to harm me or my family, and I, too, am now allegedly on a wanted list for violating it. Carrie Lam, Hong Kong’s Beijing-backed leader, has called opponents of the national security law “enemies of the people.”

A broad range of freedoms, relating to assembly, association, speech, the press, academic research, the electoral process and more, is increasingly under threat in Hong Kong. The headquarters of the most vocal pro-democracy newspaper in town was raided by 200 police officers in early August. Professors self-censor and remove certain topics from their research proposals because the content may be interpreted as breaching the new law. Protesters have been arrested for carrying flags or signs that showed allegedly unacceptable slogans. 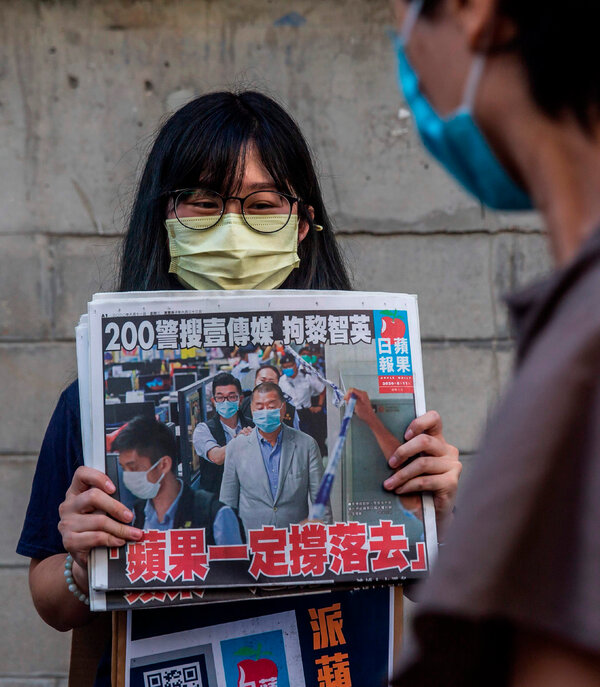 Most people now refrain from expressing their political views — in person and online — because of the potential repercussions. Beijing continues to disqualify opposition candidates from running for office and invisible self-censorship bubbles beneath the surface.

This oppressive environment has become worse because of government-imposed pandemic restrictions, which ban all gatherings, political or otherwise. Yet Hong Kong’s pro-democracy movement is very much alive. It has just adopted more creative and subtle ways to circumvent Beijing’s shifting standards in defining breaches of the national security law.

The protesters’ motto, “Be Water,” reflects a tenacious and flexible strategy that allows them to exert social pressure, even when it’s all but impossible to stage in-person demonstrations. One expression of this approach is the “yellow economic circle,” a system through which pro-democracy supporters choose to patronize exclusively pro-democracy businesses and to boycott those that support the police and are affiliated with China’s Communist Party.

The ultimate goal of our sacrifice is clear: We yearn for a Hong Kong that’s genuinely ruled and run by Hong Kongers, free from Chinese intervention. This “high degree of autonomy” was precisely the promise Beijing made in 1984 with the signing of the Sino-British Joint Declaration, which set the terms for the 1997 handover.

Given its vibrant civil society, long history of direct elections — even though the legislature isn’t itself fully democratic — and cosmopolitanism, Hong Kong is more than capable of self-governance. In fact, many iconic figures in the pro-democracy movement have served as legislators. And their mandate is indisputable: The opposition camp has almost always won a majority of votes for directly elected seats.

The goal of the movement isn’t to destroy the city; rather, it’s to preserve our traditions and unique way of life in the face of Chinese expansionism. Around the world, those in favor of “law and order” or maintaining the status quo tend to correlate protests and uprisings with destruction and chaos. Contrary to what they believe, however, Hong Kong’s movement more than passes the test for good governance and it has, time and again, demonstrated unity, mobility, effectiveness and the ability to make progress.

Like many other protest movements, ours is built on the empathy we have for one another. Those who are in power and obsessed with power can never comprehend that.

The values we uphold — freedom, democracy, human rights and the rule of law among them — are universal. They have been the cornerstones of Hong Kong’s success in the past, enabling its rise to the status of global city. But as the local government’s credibility and legitimacy plummet to a low point, nothing short of fundamental and structural reform can save it. The opposition doesn’t lack the ability to rule, only an opportunity.

Nathan Law Kwun Chung is a pro-democracy activist from Hong Kong and was the city’s youngest-ever elected legislator.