Home » Analysis & Comment » Opinion | For a Second There, We Stopped Talking About Trump

Opinion | For a Second There, We Stopped Talking About Trump

Gail Collins: Whole new world, Bret. Got a new Congress coming in, and a new … Well, there are some new governors. Same old president. And I do want to ask you about the dreaded wall, among other Trumpisms. But first, any particular election takeaways?

Bret Stephens: The good news, Gail, is that Democrats had a better election night than was apparent late that night or the next day. Nothing would have been worse than a midterm result vindicating President Trump’s first two years in office. It’s particularly nice to see Vladimir Putin’s favorite Republican member of the House, Dana Rohrabacher of California, voted out of office.

Gail: This is the world Trump has made: Bret Stephens sitting in front of the TV cheering whenever a Republican goes down.

Bret: Call it the “Trump Silver Linings Playbook.” I’m also buoyed by the fact that it was a better night for the moderate wing of the Democratic Party than it was for more progressive candidates. It’s important that Democrats digest that as they begin to consider the presidential field. If the name of the game is to beat Trump in 2020, the best way to assure that outcome is to steer the party toward the center, not the left.

But I still feel the night was not quite good enough for Democrats. The simple fact is that Republicans held and picked up seats in the Senate. I keep hearing people go on about something called the “Senate popular vote,” which Democrats won overwhelmingly, but that’s like mentioning your high G.P.A. at a singing contest: commendable but irrelevant.

Gail: Well, it is true that rooms half full of people in some states have more power than six blocks of apartment buildings someplace else. It’s the way the country is built and I’m not expecting any new constitutional amendments to change our very peculiar system.

Although I do think we need to remind people once in a while that the new senator from North Dakota got elected with fewer than 180,000 votes, while the losing candidate in Florida is a guy who got more than four million.

Bret: True, although don’t forget that Vermont gets just as many senators as Texas, and Delaware, Hawaii, Rhode Island, New Hampshire, Oregon and now Nevada are solidly blue in the Senate.

Gail: You know that I’ve always had a thing about how the country’s divided between empty places and crowded places. It’s partly based on a perfectly rational assessment of needs. But it’s also partly based on a longstanding distrust that Trump has made truly poisonous. Kind of scary.

Bret: Federalism — dividing power between Washington and the states — is a very good thing, not least for uniting such a big country. But you’re right: It’s strange to think of our Manhattanite president being the political beneficiary of Jeffersonian distrust of big cities.

Gail: I would love to see a presidential candidate who could do something to bring the regions closer together. As to the left-center thing, we’ll have to wait and see. Most of the 2,000 or so Democrats who are out there waving their hands are perfectly capable of going either way, depending on what they think it’ll take to win.

Do you have a favorite? Or six?

Bret: For starters, I hope Democrats choose a governor or ex-governor, someone with broad executive experience, rather than a senator or congressman.

Gail: Everybody yearns for a governor. I know the part about executive experience is true, but don’t you think part of the allure of the governors is that nobody actually sees them around all that much? It’s hard to get sick of them, unless you actually happened to be governed by one of the hot names in question.

But you were talking about favorites. Go on.

Bret: Next thing, a candidate who is from a purple or even a red state, and knows how to talk to and bargain with the other side. Bill Clinton had that gift, which is what helped make him an effective president. So the names that spring to my mind are New Hampshire’s Maggie Hassan, Colorado’s John Hickenlooper or New Orleans’s Mitch Landrieu, rather than, say, Kirsten Gillibrand, Elizabeth Warren or Cory Booker.

By the way, there’s been talk that Hillary Clinton might try to run again. If she asked your advice as to whether to do it, what would you tell her?

Gail: I would tell her: “Hillary, it looks like you’re having fun with this. Go ahead. I presume you understand it’s totally make-believe.”

I’m actually excited about seeing a whole passel of them go out and bump heads and see who rises to the top. Although whoever it is, we will twitter bitterly about how much better it would be if whatsername from Montana hadn’t gotten such a raw deal.

Meanwhile, we’ve got Congress flopping around trying to pass a spending package without tossing in billions for Trump’s wall. If Mitch McConnell called you for advice, what would you tell him?

Bret: I think the wall’s a dumb idea, in the same way I think a lot of gigantic infrastructure projects are a waste of money. But I’m not unalterably opposed to it. I just regret it wasn’t part of a package immigration deal that would include a path to citizenship for the Dreamers and broader avenues for legal immigration, ranging from seasonal workers to high-skill H-1B holders and their spouses. That’s what McConnell should be angling for, if only to restore the idea that Republicans aren’t simply the Know Nothings of the 21st century.

What really exercises me, however, is that we have an acting attorney general in Matthew Whitaker who seems to think Marbury v. Madison was wrongly decided, and that the nullification by states of federal law is a good idea, and that Robert Mueller has no right to investigate Trump’s financial relationships in connection to the Russia probe. There’s also a reasonable argument to make that Whitaker holds his post unconstitutionally.

Gail: Yet another example of the president’s genius for bringing liberals and conservatives together. I have to say when I heard the part about Whitaker thinking the states should nullify federal laws I was … who knew I could still be floored?

Bret: Honestly, I’m somewhat surprised his presence in an office that requires Senate confirmation isn’t triggering a stronger response among Democrats, although it’s good at least that Democratic senators are suing over the appointment. Can you imagine what Republicans would be saying if a President Hillary Clinton had done something similar — forcing the resignation of a sitting attorney general and replacing that person with a political hatchet man like Sidney Blumenthal?

Gail: I spend half my life imagining what the Republicans would be saying if Hillary Clinton had done — whatever. Well, Sidney Blumenthal isn’t a lawyer, but compared with Matthew Whitaker he’d still be 100 times better. Compared with Matthew Whitaker, Sidney Blumenthal for attorney general would be like … oh, I don’t know. Who was your favorite attorney general? They don’t usually get noticed except when they’re terrible. 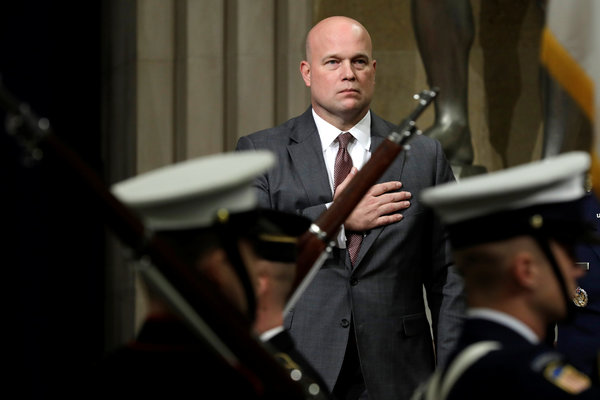 Bret: Right now I’m partial to Elliot Richardson, who resigned during the Watergate crisis because he knew his duty was to the rule of law, not Richard Nixon.

Gail: That’s a good choice. Although I was secretly hoping you’d come up with someone really obscure, like Alphonso Taft. And then I’d have to look him up to see if I agreed.

But back to Whitaker — besides the senators’ suit that you mentioned, the Democrats have been yelling plenty and Trump is upset enough that he called the about-to-be House Intelligence Committee chairman Adam Schiff “Adam Schitt” in one of his ever-so-presidential tweets.

And by the way, I certainly liked Republican Jeff Flake’s vow not to vote for any more judicial nominations until the Senate votes to protect Robert Mueller. There’s nothing the party cares about more than those judges. It’d only take one more Republican to make it work. Still waiting …

Bret: One of the reasons I remain an admirer of Jeff Flake. Maybe Nebraska’s Ben Sasse can pick up that banner once Flake retires from Congress.

Gail: You know I thought Ben Sasse was going to be one of those semi-heroic rebels but he hasn’t really risen to the occasion. Maybe you’re right and he just wants to wait until next year when Flake and Bob Corker of Tennessee are retired, and he’s got the good-guy platform to himself.

Bret: For the record (and because I don’t think I’ve said anything in this conversation yet that will make get our readers hackles up) I’m glad Republicans will continue to nominate conservative judges to the courts. But not while we have an attorney general whose chief qualification for the job is that he served as the legal bouncer for a business scam and has legal ideas that would embarrass a high-school debate team.

Bret: That being said, I wish Ruth Bader Ginsburg a speedy and full recovery. And I suspect the next Supreme Court retirement will be that of Clarence Thomas.

Gail: I have faith that Ruth Bader Ginsburg will hang in there. She knows she’s got half the country saying prayers that she’ll be back doing her push-ups soon. And you’re right, we disagree on the judge front. The nation is not going to be a better place for having Brett Kavanaugh on the Supreme Court no matter how many good schools he went to.

Maybe we should quit while we’re still in discord.

Bret: If only I could believe in the power of prayer. In all events, we need to give our readers an excuse for a good food fight over Thanksgiving. I hope you and all of our readers have a lovely holiday. Beware of too much stuffing!

Gail Collins is an Op-Ed columnist, a former member of the editorial board and was the first woman to serve as Times editorial page editor, from 2001 to 2007. @GailCollins • Facebook

Bret L. Stephens has been an Opinion columnist with The Times since April 2017. He won a Pulitzer Prize for commentary at The Wall Street Journal in 2013 and was previously editor in chief of The Jerusalem Post. @BretStephensNYT • Facebook