Opinion | Barr the Bad or Rudy the Ridiculous?

When grad students of the future write dissertations on the worst presidential transitions in American history, I have a feeling 2020 will get a lot of attention.

True, nobody seceded from the union. But it’s a bad sign when the president refuses to admit he’s lost re-election, then abruptly fires the defense secretary and a top cybersecurity official.

The incoming Biden administration has been frozen out of … just about everything. Most of the top guys on the Trump team are keeping a low profile. Those who aren’t remind us every day why we should be very, very worried about who’s in charge.

Rudy Giuliani is supposed to be leading the fight to keep Trump in office despite the minor detail of his having lost the election. Challenging the vote count in Pennsylvania, Giuliani told a judge that the plaintiffs were “denied the opportunity to have an unobstructed observation and ensure opacity.”

“I’m not quite sure I know what opacity means,” the president’s top lawyer continued. “It probably means you can see, right?”

“It means you can’t,” the judge responded.

Sounds like a Worst winner, right? Actually, few of the more than 3,000 voters picked Rudy as the Worst member of the Trump orbit despite his very high entertainment quotient. Our discerning readers are less disturbed by the incompetent fools Trump surrounds himself with than the thin line of appointees efficient enough to actually do some damage.

And the winner is …

Well, actually his other victories were in the Worst Cabinet Member competitions. But there’s definitely something that distinguishes Barr from the rest of the pack. “Although not the craziest, he is definitely the most dangerous,” as Terence put it.

Barr is a big, big advocate of presidential authority. (Perhaps you remember his efforts to undermine the Mueller report.) His first response to Trump’s suggestion that he hadn’t really lost the election was to call on his own department to investigate claims of voter fraud. The underling given the job quit immediately.

Second Worst place went to Secretary of State Mike Pompeo, who got particular mention for his response to a question about whether State is preparing to work with the Biden transition team. “There will be a smooth transition to a second Trump administration,” Pompeo said, grinning, during a briefing last week. “All right? We’re ready.”

“Ordinarily I would go with Barr,” wrote Carole from Lake Worth, Fla. “But I am switching my vote to Pompeo this time. Just because of that stupid smirk. And the destroying democracy thing.”

Emily Murphy, the head of the General Services Administration, is most definitely a new face in the Worst Olympics, but she won a place in the finale by refusing to sign the required paperwork that Joe Biden had won the election. Without her cooperation, the incoming administration can’t get funds for transition or access to federal agencies where it will work.

Murphy came in third, a stellar achievement for a federal official who’s never been in contention for Top Awful before. Michael McAllister of New York felt Murphy was mainly an example of missed opportunity. “Unencumbered by any adolescent male macho thought disorder and lacking the public notice the others have accrued, she could have quietly done the right thing. It would be a welcome irony to have the only woman in the list show some courage and integrity.”

The Trump team does not do irony. “It is always nice to see a Cinderella story of a scrappy newcomer rocketing to the top of the corruption heap,” mused Dan from Madison.

Following Murphy — by write-in vote! — was Mitch McConnell. There’s something about the Senate majority leader that drives a lot of people crazy, and I’d be willing to predict that if the Republicans maintain a tiny majority in the Senate, McConnell will be the obsession of every American who voted for Biden. 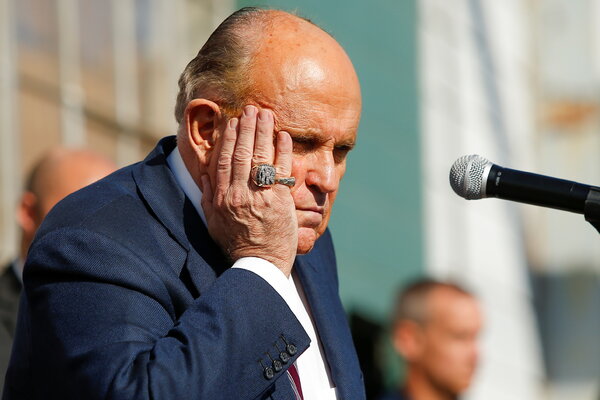 Giuliani came in only fifth. But canny Times readers are aware that his awfulness is matched only by his ineptitude. The fact that Donald Trump has put him in charge of his fight against the election results is … very good news for people who want to keep the election results.

Rudy is reportedly asking for $20,000 a day for his efforts, which is quite a hunk of money for a guy whose highest-profile recent business venture was pushing a brand of cigars. Seeing him fight with Trump over the bill would make the president’s retirement extra satisfying.

Mike Pence came in way down at the bottom with only 5 percent of the votes. But he still has his advocates. “For his rictus smile, his wax museum poses, his performance at the solo debate, his LEADERSHIP of the COVID task force, his 20% approval rating in Indiana before the election, his Baghdad Bob imitation, and for just being Mike Pence,” wrote Johnnyd from Pennsylvania.

And finally, thanks to all the readers who wrote in to say that picking the Worst of the Trump gang was impossible. “This is like trying to pick the best Beatles song,” protested a voter in Phoenix.

Opinion | China Disappeared My Professor. It Can’t Silence His Poetry.