Surprises from Jeremy Corbyn in Britain, the foreign minister in Iran and astrophysicists all over. 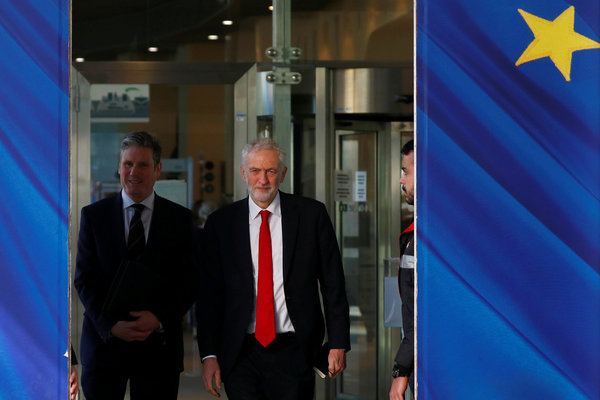 Facing a rash of resignations from Labour and the prospect of more, the party’s leader, Jeremy Corbyn, dropped his resistance to a second referendum on whether the country should withdraw from the E.U.

The amendment is unlikely to be approved in Parliament anytime soon, but it will cheer those in the country who have been fighting to reverse the outcome of the 2016 referendum.

What’s next: On Wednesday, Parliament is expected to vote to eliminate the chaotic option of leaving the E.U. without a transition plan in place. That would leave Prime Minister Theresa May, who met with European leaders in Sharm el-Sheikh, Egypt, on Monday, with few options to complete Brexit by the March 29 deadline.

A summit meeting between European and Arab leaders was never going to be easy.

And indeed, it wasn’t. “You are not going to teach us about humanity,” the Egyptian president, Abdel Fattah el-Sisi, told Europeans who questioned his human rights record in talks at the Red Sea resort of Sharm el-Sheikh, even as they sought closer ties on issues like migration and terrorism.

Mohammad Javad Zarif, an American-educated diplomat who was an architect of the Iranian nuclear deal, announced his resignation on Instagram. He is one of the Islamic Republic’s best-known figures abroad.

In his post, he said he apologized “for my inability to continue serving and for all the shortcomings during my service.”

What we don’t know: It was not immediately clear why he was quitting or whether his resignation would be accepted.

Analysis: Mr. Zarif was the only top Iranian official with a deep understanding of Western diplomacy and the ability to interact directly with the West. His public resignation, in a country where governance is usually conducted behind closed doors, seemed to indicate escalating tensions between the country’s hard-liners and President Hassan Rouhani.

Context: Iran is in the midst of a dire economic crisis, worsened by American sanctions, which has increased pressure on Mr. Rouhani. The U.S. withdrawal from the nuclear deal made Mr. Zarif vulnerable to attacks from hard-liners who never supported it.

Have dark forces been messing with the universe?

The universe seems to be expanding far more rapidly than it should be. Astrophysicists have struggled to account for the discrepancy.

They’ve been coming up with new ideas, which, if borne out, could mean rewriting the story of the origin of the cosmos, and its ultimate fate.

The problem: New precision in measuring the Hubble constant — the acceleration of galaxies away from one another in the expanding universe — suggests that the expansion is about 9 percent faster than expected.

Possible explanations: Theories involve dark energy, new particles and a mysterious force that appeared near the Big Bang and then disappeared. We’d really like to just direct you to the explanation by our science reporter Dennis Overbye, who has a degree in physics from M.I.T. and a way with words.

Australia: The lifting of a gag order allowed news organizations to finally report that in December, Cardinal George Pell became the highest-ranking Roman Catholic leader to be convicted of sexual abuse. This is the story The Times was able to print at the time, but not distribute online.

Vietnam: North Korea’s leader, Kim Jong-un, has arrived in Hanoi for a summit meeting with President Trump, who is en route. For Mr. Kim, the visit has many layers of symbolism that go beyond the American president.

Kashmir: The Pakistani military said India had conducted airstrikes in territory controlled by Pakistan, which the Indian government blames for a recent suicide attack in the disputed Kashmir region that killed at least 40 Indian soldiers.

Germany: A government manifesto effectively endorsed the merger of two troubled banks, Deutsche Bank and Commerzbank, aiming to create an institution able to stand up to global competitors. Neither the banks nor officials have commented.

Belgium: An exaggerated story about “Nazi pensions” — paid by Germany to Belgians for Nazi collaboration — caused a stir, but many of its claims were false or misleading. The truth of the matter is complicated.

Brazil: A young humpback whale washed ashore on a remote, forested island in the Amazon River, at a time of year when it should have already migrated thousands of miles to Antarctica.

The border wall: The U.S. House of Representatives will vote today on a resolution against President Trump’s national emergency declaration, which allows him to divert funds to build the wall. Republican leaders are scrambling to keep lawmakers in their party from voting for it.

Ireland: Ireland had a record-high number of new H.I.V. infections in 2018, a trend that some activists attribute to poor sex health education and insufficient access to preventive drugs.

Mauritius: In a nonbinding judgment, the U.N.’s highest court said that Britain was wrong to detach a group of Indian Ocean islands from Mauritius, at the time a British colony, and evict their inhabitants to facilitate an American air base on the island of Diego Garcia. The court said Britain should end its control of the archipelago “as rapidly as possible.”

Afghanistan: The U.S. and the Taliban have begun their highest-level negotiations yet on ending the war.

The Oscars: Here’s a roundup of the best and worst moments from the ceremony. There’s some controversy over the award for best picture, which went to “Green Book,” a film about an interracial friendship that some critics find clichéd and retrograde.

Chefs’ pick: When they’re in Hong Kong, culinary experts from all over like to eat at Yardbird, which mixes the polish of Tokyo’s favorite restaurants, the warmth of Sydney’s and the glamour of New York’s.

Recipe of the day: This spicy, lamb-forward take on a ragù is done in a fraction of the usual time. (Our Five Weeknight Dishes newsletter has more recipe recommendations.)

Loneliness is bad for your health. But it’s a subjective state and it can be changed.

Planning a beach vacation? Here are some unexpected but helpful things you should pack.

We often ask readers for Back Story ideas. Susanne Fischer of New York suggested the Oxford comma, which was traditionally used at Oxford University Press.

“I’m a big fan, use it often, and think it’s really important for clarification,” she wrote.

The Times, like most other news organizations, does not usually use the comma, which is also known as the serial comma. “In general, do not use a comma before and or or in a series: The snow stalled cars, buses and trains,” our stylebook says.

“A goal of punctuation is to make a sentence as clear as possible, and in most cases that final comma isn’t necessary for understanding the relationship of all the items in a series,” said Susan Wessling, The Times’s senior editor for editing standards.

There are exceptions. Around this time last year, a Maine dairy company agreed to pay its drivers $5 million after a dispute that hinged entirely on the lack of an Oxford comma — in a list of activities that did not require overtime payments.

Inyoung Kang, a home screen editor based in London, wrote today’s Back Story.

Check out this page to find a Morning Briefing for your region. (In addition to our European edition, we have Australian, Asian and U.S. editions.)

Sign up here to receive an Evening Briefing on U.S. weeknights, and here’s our full range of free newsletters.