Emmanuel Macron is the largest political force in Europe today, but he is a force now hemmed in, constrained, trapped. The hurricane of his success last year – the defeat of the far-right Marine Le Pen, the sweeping assembly victory of his newly-minted party, La République En Marche!, made him imperial in his power. That power now is much diminished, as is Europe itself. Yet though Macron’s ambitions are curtailed and his power sapped, he has taught the world some useful lessons. 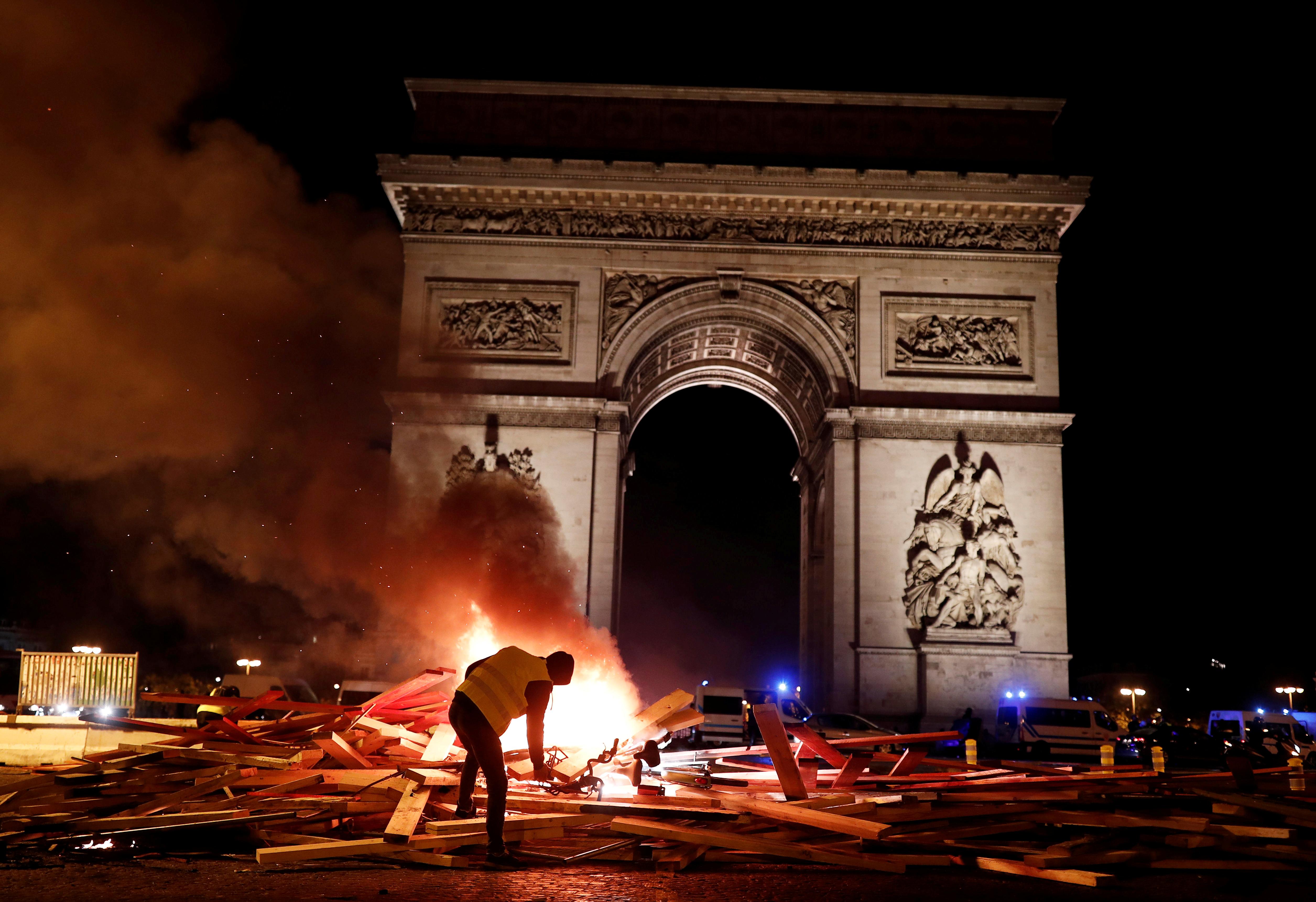 The hurricane which was early Macron is now a wind blowing hard against him. His determination to supercharge a deep integration of the European Union has had nowhere to go for some months, and not just because the indispensable partner in the endeavor, Germany’s Chancellor Angela Merkel, is so weakened. Earlier this week, the Financial Times revealed a sharp quarrel between the Dutch Finance Minister Wopke Hoekstra and his French counterpart Bruno Le Maire – in which the French minister charged Hoekstra with leading a group of small northern countries snarkily dubbed the “new Hanseatic League” in opposition to closer financial integration – with, apparently, the quiet approval of Germany.

Macron’s latest challenge has been a series of strong, at times violent protests against a government-mandated increase in fuel prices. He has flatly defied the resistance so far, saying that “We must not change course, because the policy direction is right and necessary.” This in spite of the fact that the demonstrators appear to have the support of a majority of French citizens, and that both the populist right, under Le Pen, and the populist left, under Jean-Luc Melenchon, use the protests to build their bases.

Ironically, Macron’s largest success is to have illuminated two important hypocrisies. The European Union is committed to ever-closer union, and leading figures like Jean-Claude Juncker incessantly call for movement towards what would be a European federal state. But, as the spat between the French and the Dutch finance ministers showed, many, maybe most, of the rest of the EU’s states increasingly recoil from that future. At some point, the Union must recognize that its official rhetoric is out of kilter with its members’ wishes – which are that sovereignty, especially in economic matters, remains with their governments, parliaments and people. The more Macron pushes, the clearer that becomes. (If it had been clear before, the clarity might have quashed a move towards Brexit.)

The fuel protests also reveal a still larger hypocrisy – one which speaks directly to how we live now, and how our children and grandchildren will live. In an impassioned speech on Tuesday, the French president sought to reach out to the protestors, promised to take into account their anger and to change the way in which the government relates to them – but said he would not change course “because the policy direction is right and necessary.”

Macron even attached a sting to his refusal to change, accusing his fellow citizens of wishing to have their cake and eat it. You cannot, he said, be at once for saving the environment and then protest rising fuel prices. Widening the charge still further, he added: “You cannot chant in the same slogan: ‘cut taxes and build more crèches, schools.’”

This speaks directly to us, because it shines a harsh light on the disassociation between agreeing on what is good for our societies (crèches, schools) and for our world (saving the environment) on the one hand – and on the other, protecting our self-interest to the point of taking to the streets. In a revealing report, the New York Times has shown that many suburbanites vote Democrat, apparently embracing progressive positions – but don’t necessarily agree with the party’s policies on issues like higher taxes.

Decisive action on carbon emissions at both official and personal levels falls into the hypocrisy trap. Even those who agree that human conduct is the main driver of global warming still want to drive gas-guzzling SUVs and are willing to march for low fuel prices.

Increasingly, the way to escape from the hypocrisy of agreeing with the diagnosis while refusing the cure is to discount the findings of the scientists. When they forecast world-threatening consequences if emissions are not cut they are said to be exaggerating, or worse, falsifying their results. This movement has become the default position of populists, both leaders and supporters.

That’s true in France, where the national-populist leaders support the protestors. And it’s true in the United States, too. The U.S. government’s Fourth National Climate Assessment, released Nov. 23, predicted climate change will cost the U.S. economy hundreds of billions of dollars by the end of the century. Fires on the scale of the deadly blazes in California will be more frequent, floods more damaging, public health more challenged by heatwaves, drought and pollution.

Donald Trump has disputed his own government’s report, saying “I don’t believe it,” when asked about the severe economic impacts forecast. The U.S. president has built his political base on those who believe their lives are hard enough without having to care about the effects of global warming. He isn’t going to challenge that belief. In August, his administration revealed a plan to cut the fuel economy standards put in place by President Barack Obama – a major plank in that administration’s climate change program.

Macron has not won his most ambitious aim, to re-energize the European Union. He courts greater unpopularity by refusing to back down before the fuel protests. But he has taught a useful lesson: that high-sounding phrases and an apparent near-consensus which endorse ever-closer European union and ever-smaller carbon emissions are not serving their purpose. If they are to do so, the goals of the EU must be modified, and the need for action on climate change must be more urgently stressed and pursued. Populist politics expresses real problems stemming from gross inequalities and sharp cultural divides. It also contains dangerous illusions. Any new political order has to recognize the first and combat the second.