Zeta Is Forecast to Bring Life-Threatening Storm Surge to Louisiana

Zeta, once again a Category 1 hurricane, was swirling over the Gulf of Mexico on Wednesday toward southeastern Louisiana, where it was expected to bring heavy rains and damaging winds to a state that has been repeatedly clobbered by hurricanes this season.

Should the forecast hold, Zeta will be the fifth named storm to strike the state this year with about a month left in the hurricane season. The standing record of four was set in 2002, said Philip Klotzbach, a research scientist at Colorado State University.

By early Wednesday morning, Zeta was 355 miles south southwest of New Orleans and forecast to bring life-threatening storm surge and strong winds to southeastern Louisiana by midday. The storm was moving at 17 miles per hour with maximum sustained winds of 85 miles per hour. Zeta was forecast to gain some additional strength.

A hurricane warning was in effect Wednesday morning for a stretch of coast from Morgan City, La., to the Mississippi-Alabama border and the metropolitan New Orleans area.

The storm was expected to make landfall in southeastern Louisiana by Wednesday afternoon and then move across the southeastern and eastern United States on Thursday, dumping up to six inches of rain in some locations. 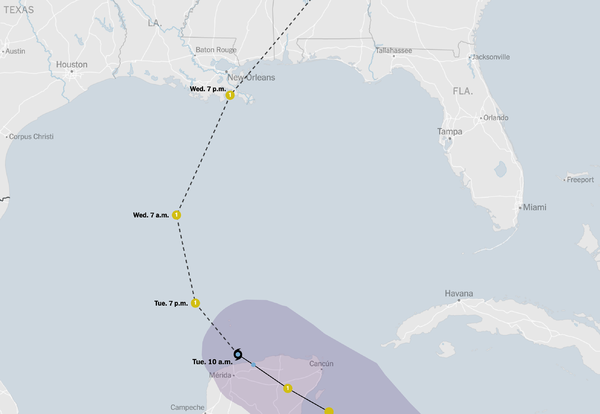 Hurricane Zeta is expected to make landfall in the United States Wednesday.

Zeta, which hit the northern Yucatán Peninsula of Mexico on Monday and Tuesday, is the 27th named storm in an Atlantic cyclone season so busy that forecasters have run through the alphabet of names and are now working their way through Greek letters.

The northern Gulf Coast region has been fatigued by repeated storms — Cristobal in June, Laura and Marco in August, Sally and Beta in September, and then Delta this month. Before they made landfall, those storms swerved to the east or west, scraping New Orleans with just a glancing blow.

Gov. John Bel Edwards of Louisiana has declared a state of emergency and said Tuesday night that President Trump had approved the state’s request for a Federal Emergency Declaration. “Though we don’t know exactly what #Zeta will bring, we know this will be a big help in the recovery process for those communities that will feel” the storm’s impact, he said.

The devastation this year has been attributed in part to a changing climate, which has made hurricanes more destructive, with more rain and greater storm surge. But climate scientists said the series of storms in Louisiana could also be blamed on simple bad luck.

“It’s kind of like flipping a coin and getting heads five times in a row — it happens,” said James P. Kossin, a researcher with the National Oceanic and Atmospheric Administration, adding that “it’s not that surprising” given the size of the Gulf and the randomness of weather factors.

Along the Gulf Coast, veterans of hurricanes tend to take Category 1 storms in stride. There was also the added advantage that late-season storms, like Zeta, typically move much faster than an early-season storm that can stall for 10 to 12 hours, overwhelming areas with winds and rain.

But in New Orleans, there is concern that low-level hurricanes can be more damaging than predicted. Even the weakest hurricanes can cause hardship or at least discomfort, as the wind and rain knock out electricity and damage buildings.

Any significant rainfall in the city is worrisome because of the city’s drainage system, a series of pumps that lift water out of the bowl-shaped city through power supplied partly by century-old turbines. On Sunday, the city’s Sewerage and Water Board announced that Turbine 4, one of the system’s largest, “unexpectedly went offline,” prompting concerns that water in low-lying areas of the city would be pumped out more slowly.

While some residents across the state sprang into action, preparing their property and bracing for whatever the storm may bring, others didn’t appear distressed.

“I’m over it, really,” Glen David Andrews, a trombonist, said during a break in a gig at Café du Monde in the French Quarter of New Orleans. He was not planning to put much effort into preparing for the storm. “I’m going to charge up my devices,” he said, “and then sit back to enjoy the wind as this 24-hour storm blows through the city.”

Reporting was contributed by Katy Reckdahl from New Orleans, Rick Rojas from Nashville, and Maria Cramer from New York.