THOUSAND OAKS, Calif. — Firefighters in opposite ends of California fought back fast-moving blazes on Friday morning as wildfires raged out of control near major cities, forced tens of thousands of residents to flee their homes and damaged hundreds of buildings. 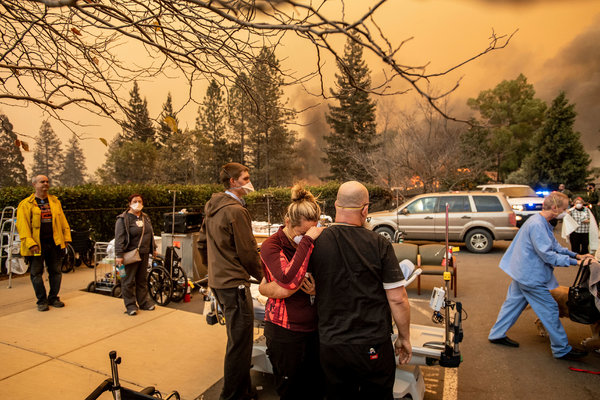 In Northern California, firefighters in Chico lined up on the outskirts of the city on Friday morning to try to push the so-called Camp Fire away from homes and subdivisions. The fire erupted on Thursday with towering flames and thick smoke as it quickly scorched 20,000 acres and swallowed buildings in its path.

The destructive wildfire tore through Paradise, a town of about 26,000, on Thursday as it barreled toward Chico in Butte County. It forced a hospital to evacuate and expanded with such ferocity that some people in their cars jumped out to flee on foot.

In Southern California, the Woolsey Fire near Thousand Oaks had consumed 8,000 acres and destroyed at least 75 homes as of Friday morning, state fire officials said. Residents in 75,000 homes in Ventura and Los Angeles Counties have been told to evacuate immediately. The blaze began as a brush fire late Thursday and rapidly transformed into a racing inferno.

The Woolsey Fire delivered a one-two punch for Thousand Oaks, igniting just hours after a gunman opened fire inside a popular country music bar in the city on Wednesday night and killed 12 people. On Friday morning, people who had fled their homes gathered in a shelter set up at the Thousand Oaks Teen Center, which was used the day before as a meeting place for families and friends of shooting victims. Some slept on cots, while others huddled around a television to watch the latest news about the fire.

High winds and dry conditions fueled the Camp Fire and Woolsey Fire through the night and presented tough conditions for the nearly 3,000 firefighters deployed to both blazes.

Residents in two cities in the north, Inskip and Sterling, were told on Friday morning to evacuate. And after the Woolsey Fire jumped the freeway and quickly expanded up a hill on the other side, the authorities in Ventura County shut down a section of Highway 101, a major artery in the region. Two colleges whose campuses are near that fire, Pepperdine University in Malibu and California Lutheran University in Thousand Oaks, canceled classes.