The state, up for grabs in the presidential election, has become a coronavirus hot spot. “It’s too late” to solve, one mayor says. 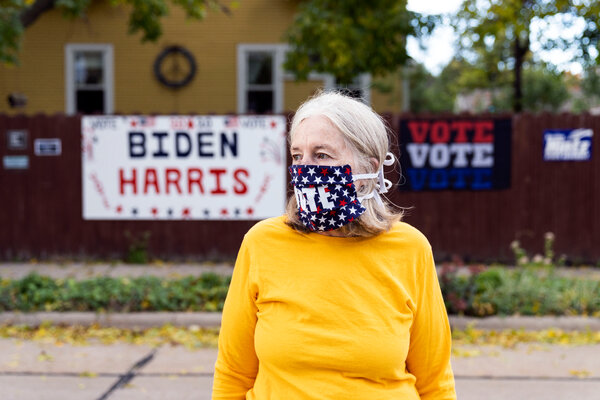 OSHKOSH, Wis. — Steve VanderLoop, 64, heard that several of his co-workers at a manufacturing plant in Wisconsin had fallen ill from Covid-19. Then there was his brother-in-law’s entire family in nearby Washington County. A good friend in Appleton, up the shore of Lake Winnebago. And last week, the gut punch: Mr. VanderLoop’s 96-year-old mother learned she had the virus.

“It’s just crazy here now,” he said of his home state, standing on his porch on a block whose yards and fences were festooned with Biden signs, billowing Trump flags, hand-painted posters and bumper stickers with peace symbols.

He adjusted his cloth mask to cover his nose. “Then you throw in the campaign and everything else. It’s a big snowball.”

Mr. VanderLoop is one of many Wisconsinites living uncomfortably in a dual hot spot: of the coronavirus, which has spiked uncontrollably in counties throughout the state in recent weeks, and of the presidential campaign, whose attention seems to be unblinkingly focused on Wisconsin voters.

They have watched with growing alarm as coronavirus cases have exploded. Three of the four metro areas in the United States with the most cases per capita were in northeast Wisconsin, and one hospital in Green Bay, the third-largest city in the state, was nearly full this week.

Daily statewide deaths because of the coronavirus hit a record on Wednesday when officials reported that 26 people had succumbed to the virus. On Thursday, hospitalizations were at a high since the pandemic began, and more than 3,000 new cases were reported, another record.