There’s usually nothing too dramatic about the census.

Except perhaps what happened to New York State last week, when the Census Bureau released figures that will cost it a seat in Congress — because the state’s 2020 census population came up 89 people, or .00044 percent, short.

But the near miss obscured something important: New York, it turns out, experienced modest growth last decade, up 823,000 people, or 4.2 percent, compared with 2010.

Because the growth rate was lower than the national gain of 7.4 percent, the state still lost out (barely) on keeping the House seat.

Various theories were offered to explain the discrepancy between expectations and the new reality. Among them: The pandemic brought out-of-state college students home to be counted at their parents’ house, and the presidential election generated so much enthusiasm in New York that it carried over to the census, inspiring a larger-than-expected response rate.

But methodological differences between how the estimates are made and how the Census Bureau conducts counts may play the biggest role. For most years, the official population counts come from the Census Bureau’s Population Estimates Program, based on administrative and modeled data. Then once a decade, the Census Bureau goes out and actually counts. This usually yields discrepancies, but the gap for New York this year is much wider than normal.

The estimates program showing New York losing population started with the 2010 census and updated those figures annually based on births, deaths and the movement of residents in and out of the state. The estimates showed New York gaining less population from immigration and losing more residents to other states as the decade wore on.

The movement of people is particularly hard to get right with modeled data, and on the face of it, this might explain the underestimate for a state like New York and a neighbor, New Jersey, which also had a surprisingly high growth number in the official 2020 results. 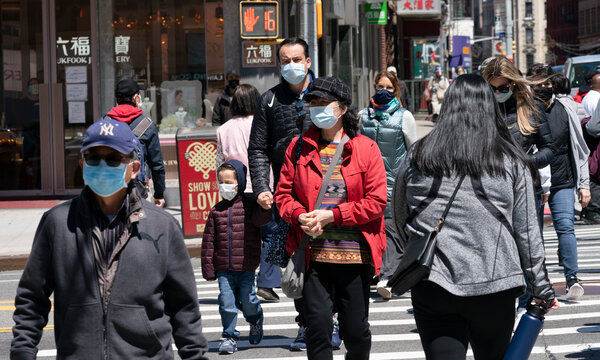 The official decennial count directly tabulates population via two crucial components: the counting itself, but also where the counting takes place. The heart of the decennial census is a “master address file” that lists every residence and residential institution — group homes, nursing homes, dormitories and the like — in the nation. The list is maintained by regional census officials and updated based primarily on postal records.

There is already criticism that some states with high Latino populations came in below their estimates because they did not put resources into census outreach. Such outreach goes beyond efforts to get residents to turn in census forms.

To be counted in the census, an address must make it onto that list, and getting missing addresses added to that list is more important to the count than getting people to return their census form.

That’s because the Census Bureau has methods for counting people even if a form isn’t returned, but there is no way to count people living at an address the bureau doesn’t know about.

Starting with the 2000 census, state and local government agencies were invited to augment and make corrections to the list through the “Local Update of Census Addresses” (LUCA) program. New York City was an early adopter, and city planners were credited with giving the city a big lift in 2000 by getting hundreds of thousands of missing addresses added to the master file.

As the 2020 census approached, cities big and small started LUCA efforts to find missing addresses. At the local level, this involves a type of data-mining exercise with local administrative records. Local officials figure out how many addresses they have in various neighborhoods and compare this with the census list. If they find a discrepancy, they send a municipal worker out to investigate.

Sometimes a new, undetected building is the source of such discrepancies, but often it’s an existing building being used differently. Three electric meters or four doorbells at a two-family home may be a clue that it has more than two families. If the local government canvassers can document these discrepancies, they can propose adding the address to the master list or modifying the address to reflect the presence of additional housing units.

This is important for counting the unauthorized immigrant population, particularly in a city like New York, where many newcomers live in makeshift illegal apartments, and where neither the dwellings nor the occupants will show up in any other administrative records.

Once on the list, those units are sent a census form. If there is no response, a census field worker tries to gather the information in person. If there’s still no response, the census taker works to gather information from a proxy, like a landlord or neighbor. If this fails and the census staffer believes the address is valid and occupied, a count is imputed for the household based on the characteristics of surrounding housing units for which good information was obtained.

Once an address makes it into the master address file and there is some sign of occupancy, there will be population assigned to it, whether somebody returns the form or not. The response might not be as accurate as if a resident returned the form, but it will not result in zero population, either.

In New York City, this work of finding missing addresses began back in 2016, and by the time the census was conducted for 2020, there were 122,000 additional housing units on the list of households to be counted. State officials made a similar effort on a broader scale, using administrative records to send local officials to investigate addresses and find group homes housing multiple residents. They managed to get a further 80,000 addresses added to the list.

It’s not clear exactly how this affected the census results, but it was enough to establish that New York had in fact grown over the past decade. Some clues emerged from technical data the bureau released last week with the first numbers, “Operational Quality Metrics,” which break down the general parameters of the count.

According to this data, New York’s master address list grew by 693,000 statewide, and after invalid addresses and vacant units were filtered out, the census counted population in 446,000 additional housing units compared with 2010, which could reflect both new units the census already knew about and the LUCA efforts. That’s a 6 percent increase that jibes with the 4.2 percent population growth.

For the House member whose congressional career will be cut short over 89 people, the 2020 census results will be remembered as a disaster.

But for the rest of New York, the results were actually a welcome surprise, and not just because it escaped the stigma of being a low-growth or shrinking state. Census figures are used to allocate dollars from more than 300 federal programs, including unemployment insurance, job training grants and the Special Supplemental Nutrition Program for Women, Infants and Children.