Home » Americas » Why N.Y.C.’s Economic Recovery May Lag the Rest of the Country’s

New York, whose diversified economy had fueled unparalleled job growth in recent years, is now facing a bigger challenge in recovering from the pandemic than almost any other major city in the country. More than one million residents are out of work, and the unemployment rate is nearly double the national average.

The city had tried to insulate itself from major downturns by shifting from tying its fortunes to the rise and fall of Wall Street. A thriving tech sector, a booming real estate industry and waves of international tourists had helped Broadway, hotels and restaurants prosper.

But now, as the virus surges again in the region, tourists are still staying away and any hope that workers would refill the city’s office towers and support its businesses before the end of the year is fading. As a result, New York’s recovery is very likely to be slow and protracted, economists said.

“This is an event that struck right at the heart of New York’s comparative advantages,” said Mark Zandi, chief economist for Moody’s Analytics, a Wall Street research firm. “Being globally oriented, being stacked up in skyscrapers and packed together in stadiums: The very thing that made New York New York was undermined by the pandemic, was upended by it.”

Mr. Zandi said he expected that it would take New York about two years longer than the rest of the country to recover all the economic losses suffered during the pandemic. “It’s going to be a long slog” that will last into 2023 for the nation and possibly until 2025 for New York City, he said.

So far, New York has been regaining jobs slower than other big cities. As of September, employment in the city was still down more than 600,000 jobs from a year before, according to the state Labor Department. 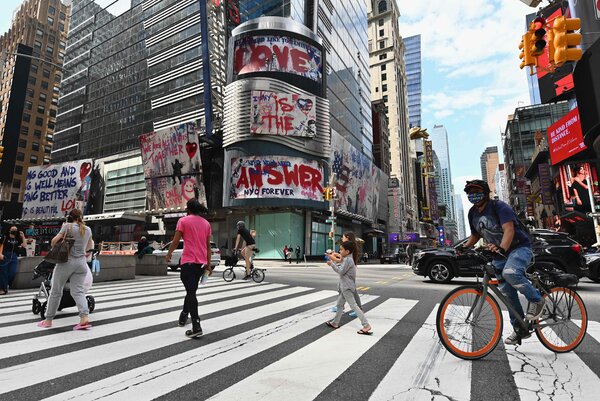 In September, more than 2.3 million New York State residents were collecting unemployment benefits, said James Parrott, an economist with the Center for New York City Affairs at the New School. Of those, at least 1.3 million were city residents who were either out of work or severely underemployed, he said.

Those losses are concentrated in five key industries — restaurants, hotels, the arts, transportation and building services — that rely on travel, tourism and business activity, Mr. Parrott said. Workers who staff office buildings have been laid off, awaiting a return of professional service workers to their offices.

“A lot of those things which we had celebrated as having helped to diversify the city’s economy in the Covid economy turned out to be big liabilities,” he said.

The cratering of the local economy is on stark display along many Manhattan blocks where offices are mostly empty, streets are lined with shuttered stores and restaurants and normally bustling gathering spots, like Bryant Park, are eerily quiet.

The city’s struggle to dig out if its financial hole and the looming possibility of major cuts to services and programs will likely become a dominant issue in next year’s mayoral election, with voters judging candidates on their economic blueprints.

Still, a top city official, Vicki Been, the deputy mayor for housing and economic development, disagreed with the economists’ projections, saying that the city was well positioned to “roar back” once fears of the virus subside.

Mayor Bill de Blasio has placed an emphasis on public health and reopening schools safely to pave the way for an economic rebound, she said. And the factors that have made the city a draw for employers, like an educated and skilled work force, remain firmly in place.

“This administration and the previous administration worked very hard to diversify the economy,” Ms. Been said. “The ingenuity we have, the talent base we have is what attracts more talent to the city and also attracts employers.”

Ms. Been said she expected the city’s office buildings to refill with workers and visitors to flock to restaurants and theaters.

“When tourism returns, people will want to come here,” she said. “I’m hearing a lot of pent-up demand to come back, but people need things to be safe and lively.”

Tourist-dependent businesses, however, appear to be in for a prolonged downturn with no sign yet that visitors are coming to New York in significant numbers.

The managers of some office buildings recalled their staffs of cleaners and security agents in recent weeks, anticipating a return of office workers as the worst of the outbreak eased.

But just a fraction have trickled back and some big tech companies like Google have told employees to work from home until next summer.

Managers of large office buildings say only about 15 percent of their tenants returned by early fall, said Denis Johnston, a vice president of Local 32BJ of the Service Employees International Union, which represents 23,000 commercial building cleaners in the city.

The largely vacant buildings have left employees like Yenny Hernandez without a paycheck since March, awaiting a call to go back to work cleaning designer showrooms.

Ms. Hernandez, 48, said that 32BJ had arranged an extension of her health insurance for six months, but it expired in late September. Now she will have to dip into her savings to pay for follow-up medical appointments for her 20-year-old son, Manuel, who had surgery this summer.

“I need my medical insurance,” said Ms. Hernandez, who lives in a subsidized apartment in the Bronx. “My insurance covered everything.”

Since the end of March, she has been getting by on $441 a week, after taxes, in regular unemployment benefits. An extra government benefit of $600 a week expired at the end of July.

To be able to cover expenses, she negotiated reducing her rent by half to $687 a month and expected to be able to pay bills for her and her son until early next year, if her layoff lasts that long.

“I saved money last year and, thank you, God, at this moment,” Ms. Hernandez said.

Even a professional address as prestigious as the Empire State Building is having trouble attracting its tenants back.

The 102-story building laid off workers in late summer after calling them back from furlough, said Mariusz Dudziec, a utility porter who has worked there for more than seven years.

Mr. Dudziec, 27, said he hoped to go back to work soon but was in line behind several colleagues who had seniority over him. Since last spring, Mr. Dudziec, has been collecting unemployment benefits, which has provided enough to cover his bills.

He missed the usual swirl of excitement around the building, which normally draws lines of tourists from dawn until late at night. “It’s getting kind of boring being at home” in the East Village, he said.

New York has so many big buildings that staffing them is a significant source of jobs. Last year, about 43,000 people, including lobby agents, elevator operators, cleaners and porters, worked in commercial and residential buildings.

Even though most buildings require at least a skeletal staff to operate and maintain systems like air-conditioning, building services has suffered greater losses than most categories of jobs. In September, jobs were down almost 35 percent from a year before, a decline of 14,400 positions.

The drop is still far smaller than the devastation suffered by businesses that depend on tourists, like restaurants, hotels and Broadway theaters, which will now be closed at least through May 30. The performing arts and spectator sports have lost more than two-thirds of their jobs.

More than 165,000 jobs have been lost in restaurants, bars and hotels. Those three industries are more concentrated in New York than most other cities, contributing to its disproportionate share of the nation’s job losses, said Mr. Zandi, the chief economist for Moody’s.

“New York depends on industries that are being crushed by the pandemic,” he said. “It’s a global city and the global economy is shut down.”

Among the 51 largest metropolitan areas in the country, only two — Las Vegas and Los Angeles — had higher unemployment rates in August than New York, according to the federal Department of Labor.

The city’s official unemployment rate in September was 14.1 percent, compared with a national rate that dropped from 8.4 percent to 7.9 percent in August.

The city’s five boroughs had rates ranging from 18.8 percent in the Bronx to 10.9 percent in Manhattan, and unemployment was significantly lower in other parts of the state.

The effect on the city’s economy has been historic. Before the virus, New York was enjoying its longest expansion on record — by far. The city had gained nearly one million jobs in a period of economic growth that lasted more than 10 years.

The city’s tourism agency, NYC & Co., has zealously promoted New York in other countries, including China, Brazil and Australia, which helped feed a surge in annual visitors from 45.8 million in 2009 to 66.6 million in 2019.

Big Tech, including Google, Facebook, Amazon and Apple, collectively employs 22,000 people in New York and, in what has been a small dose of good news for the city, has hired thousands of workers this year despite the pandemic.

Still, by the end of summer, the city had regained only about 30 percent of the payroll jobs lost in March and April.

“It’s pretty hard to get around the fact that we’re still going to be down 500,000 to 600,000 jobs at the end of the year,” Mr. Parrott said, adding that those losses include the self-employed.

One of them might be Barbara Bonham’s job cleaning bathrooms in an office tower across Fifth Avenue from Trump Tower. Ms. Bonham, 57, had cleaned about 50 bathrooms every night before she was laid off in March.

In late September, her health insurance ran out, a loss that especially worried her because her older brother died of Covid-19. Ms. Bonham, who lives in Brooklyn, said she was one of four members of her union crew awaiting a call back to work that hinges on more tenants returning to their offices.

“Maybe I’ll be going back in December or January,” she said.