Home » Americas » Why is in-flight turbulence so unpredictable?

Why is in-flight turbulence so unpredictable? 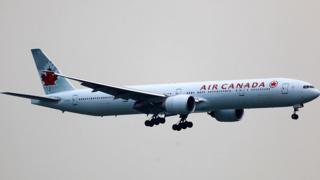 An Air Canada flight bound for Toronto from Shanghai made an emergency landing after severe turbulence injured 21 passengers, including three children.

The plane was diverted to Calgary after turbulence hit and the injured are in a stable condition.

So what causes plane turbulence in the skies? The list is long.

According to to the Federal Aviation Administration, turbulence can be caused by:

In-air turbulence is the leading cause of injury to people on flights, according to the FAA, and on average 58 people in the US are injured during turbulent flights when not wearing seatbelts every year.

Passengers on the Air Canada flight said the turbulence happened suddenly, with blankets flying up to the ceiling, people screaming and the plane feeling “like a rollercoaster”.

‘It happens in all types of weather’

Turbulence can happen unexpectedly at any time, no matter the weather, Mark Weiss, a former American Airlines pilot of 23 years, told the BBC.

“It’s just a natural phenomena of weather,” he said. “You can’t always predict it. It could be as clear as could be, and you could get caught in a jet stream.”

Airlines are diligent about turning on the “fasten seatbelt” sign if turbulence is predicted, but sometimes it comes out of nowhere, and a seatbelt can only do so much, he said.

Pilots can be tipped off to upcoming turbulence by fellow pilots flying ahead, in some cases.

A passenger can be wearing a seatbelt too loosely and still be knocked out by severe turbulence-by horizontal or vertical lifting, even getting thrown to the ceiling.

People with children on their laps need to be especially careful. Those children are basically “flying objects,” he said.

Turbulence can cause baggage bins to unlock and suitcases to fall on people, causing injury, or food and beverage carts can get loose.

“There were broken glasses from dishes… one flight attendant hit the ceiling, landed on arm rest and detached a retina in her eye.”

Mr Weiss has seen broken arms, broken noses and back and neck injuries from turbulence.

Despite warnings, some people are always going to stand up on a long flight to go to the restroom, retrieve water or stretch out, even if the seatbelt sign is on.

The best thing for passengers to do is listen to the crew when turbulence hits, he said.