Home » Americas » Why are there protests in Puerto Rico?

Why are there protests in Puerto Rico? 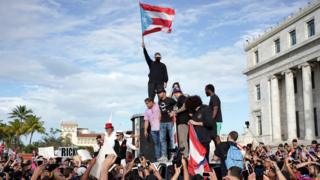 Thousands have marched in Puerto Rico for the fifth consecutive day, calling for the resignation of Governor Ricardo Rosselló.

Protesters are demanding he resign after text messages between Mr Rosselló and his team were leaked on Saturday.

Mr Rosselló has refused to step down.

Large crowds have gathered in San Juan for the past five days chanting “Ricky, resign!”

On several days, police were seen firing tear gas at protesters in the capital.

What is the scandal about?

The text messages, obtained by Puerto Rico’s Centre for Investigative Journalism, span some 900 pages. They were from a group chat that included the governor and 11 of his aides and cabinet members.

The messages include jokes about Hurricane Maria victims along with sexist and homophobic comments. Nearly 3,000 people were killed when the hurricane hit the island in 2017. However a Harvard estimate puts the toll at more than 4,600.

In one conversation, Christian Sobrino, then chief fiscal officer of Puerto Rico says he is “salivating to shoot” San Juan Mayor Carmen Yulín Cruz. Ms Cruz has criticised the governor in the past.

Mr Rosselló replies: “You’d be doing me a grand favour.”

Another message from Mr Sobrino described singer Ricky Martin as a “male chauvinist” before referencing his sexuality.

The scandal comes as two other former top government officials from Mr Rosselló’s administration were among a group arrested last week and charged with conspiracy and fraud involving millions in federal funding.

What has been the response?

Mr Rosselló has apologised for the messages and said he respected the right to protest peacefully. He has also vowed to provide greater transparency and accountability to his government.

A statement from White House spokesman Judd Deere said that the events “prove the president’s concerns about mismanagement, politicisation and corruption have been valid”.

Major figures have come out in support of the protesters. Ricky Martin led a protest to the governor’s house on Wednesday.

Hamilton creator Lin-Manuel Miranda has shared images of the protests in Puerto Rico and attended a demonstration in New York.

Reggaeton artist Bad Bunny has stopped his European tour to return to Puerto Rico and protest. He praised the “bravery” of people on the island.

What is the status of Puerto Rico?

Puerto Rico has been a US territory since 1898. Everyone born on the island is an American citizen and holds a US passport. However they cannot vote in the US presidential elections unless they are registered to vote in one of the 50 US states.

Mr Rosselló promised to push for the island to become a state during his election campaign in 2016.

It is still recovering from Hurricane Maria. Mr Rosselló has faced criticism for the handling of the recovery efforts.

The island is also in the midst of a financial crisis and has billions of dollars in debt.