The administration has not offered evidence the agency, which oversees drug safety, has delayed vaccine development. 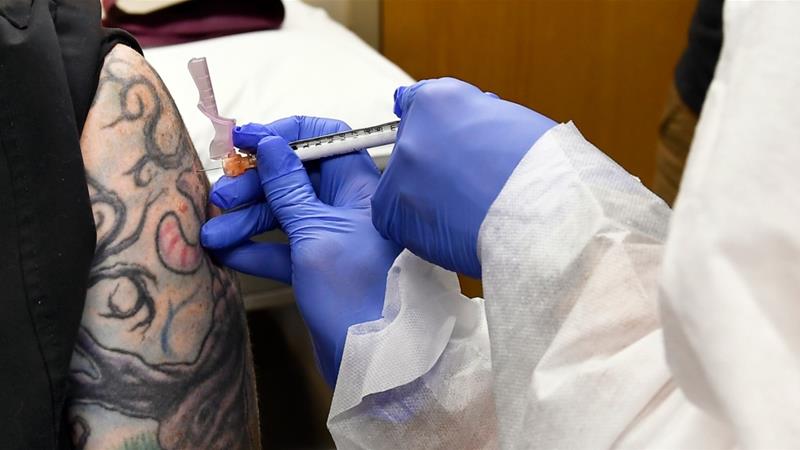 A White House official has continued President Donald Trump’s attacks on the agency that oversees the safety of drug development, suggesting that personnel at the Food and Drug Administration (FDA) have deliberately delayed the development of a vaccine and therapeutics for the coronavirus for political reasons.

The comments by White House chief of staff Mark Meadows on Sunday came a day after Trump alleged that “deep state” forces, referring to long-serving bureaucrats the president believes are dedicated to undermining his agenda, were slowing the development of vaccines.

The White House has been desperately pushing for a breakthrough in coronavirus vaccines and treatment development as the November election approaches, sparking fears the administration would try to fast track inoculants or therapies not yet proven safe for widespread use.

Trump was set to hold a news conference to announce an apparent advancement in therapeutics later in the day.

“This president is about cutting red tape,” said Meadows on ABC’s This Week programme.

“He had to make sure that they felt the heat. If they don’t see the light, they need to feel the heat because the American people are suffering,” he said, referencing Trump’s comments about the agency.

To date, the coronavirus has killed more than 176,000 Americans amid 5.6 million cases. The US is the worst hit, in terms of case numbers and deaths, of any country in the world.

In recent months, the White House has sunk vast resources into an expedited process to develop a vaccine under operation “Warp Speed”, with Trump aides banking on unveiling a successful vaccine in an “October surprise” that could help the president make up ground before the election.

“The deep state, or whoever, over at the FDA is making it very difficult for drug companies to get people in order to test the vaccines and therapeutics,” Trump tweeted on Saturday. “Obviously, they are hoping to delay the answer until after November 3rd. Must focus on speed, and saving lives!”

Trump, who has been teasing progress in therapeutics for weeks, did not offer any evidence of a slowdown. The White House has also pushed the FDA to step up its approval of blood plasma authorisation.

Meadows did not give specifics during his comments on Sunday, but said “we’ve looked at a number of people that are not being as diligent as they should be in terms of getting to the bottom of it”.

Convalescent plasma is already being tried at several hospitals, but there is little data on how effective it is or whether it must be administered fairly early in an illness to make a significant difference, Dr William Schaffner, an infectious diseases expert at Vanderbilt University, told The Associated Press news agency.

Trump, in press conferences, “has made all kinds of therapeutic suggestions,” which have not proven to be supported by science – and are even dangerous, Schaffner said.

That includes statements about the possible value of treating COVID-19 patients with ultraviolet light and bleach. Trump reportedly also recently became enthusiastic about oleandrin, a plant extract derived from a toxic shrub that scientists immediately warned against.

But the president is perhaps best known for his early and ardent embrace of the malaria drugs hydroxychloroquine and chloroquine.

The FDA in late March granted emergency authorisation for distribution of the drugs for treating COVID-19. But in June, the agency revoked the authorisation in light of growing evidence they do not work and could cause serious side effects.

Death of Ruth Bader Ginsburg, a liberal warrior of law, raises stakes in US election

‘Canada is at a crossroads’: Federal health officials warn coronavirus habits must change

Jacob Blake shooting: What will the long-term impact be?