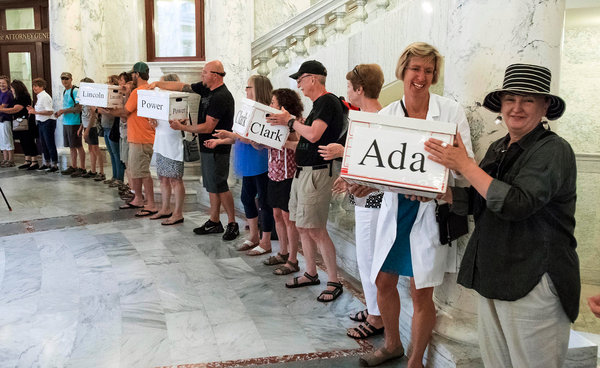 That’s the conclusion of a new body of evidence that strongly suggests that giving people coverage through expansions of the Medicaid program increases their likelihood of participating in the next election. Medicaid expansions seem to raise both voter registration and voter participation, at least temporarily.

On Tuesday, voters in three states approved measures to further expand Medicaid. The election of Democratic governors in three more could also prompt new expansions. Researchers who worked on three recent studies of the effects say it’s likely that those expansions will have a similar effect on voting in the next election cycle.

“We can confidently say: When you expand Medicaid eligibility, participation goes up,” said Jake Haselswerdt, an assistant professor of political science at the University of Missouri, who wrote one of the papers.

It’s not clear exactly why getting Medicaid makes people more likely to vote, but there are a couple of theories. It could be that Medicaid, which has been shown to increase treatment for depression and improve financial stability, makes it easier for people to participate in the political process by giving them direct benefits. Over all, wealthier and healthier Americans tend to be more likely to vote than their poorer, sicker counterparts.

Perhaps enrollment in the program simply connected people with information about registration and voting, as it brought them into contact with government websites and case workers.

Medicaid might also boost civic engagement by making people more grateful to the government and more interested in public policy. Earlier studies have shown that the creation of Social Security had a large effect on the civic participation of older Americans, and that the G.I. bill boosted participation from veterans who earned benefits under its program.

“These are programs that have a major effect on people’s lives,” said Andrea Campbell, a professor of political science at M.I.T., who wrote a book on the political legacy of Social Security. She suggested Medicaid could work similarly, by improving people’s circumstances and making them more aware of the stakes of government action.

A somewhat conflicting body of evidence has shown that enrollment in stigmatized programs, like cash welfare, actually depresses voting.

Two of the recent studies looked at what happened during the big Medicaid expansions in 2014, which occurred as a result of the Affordable Care Act. A Supreme Court ruling made the expansion optional, and only about half of states expanded right away. One study, from the Journal of Health Politics, Policy and Law, compared voting later that year between states that expanded and those that didn’t.

Another study, from the American Political Science Review, zoomed in more narrowly, looking just at similar counties on the borders between states that expanded and those that didn’t. Both papers showed increases in voter registration and voting. In the neighboring-counties research, people in the expansion counties were more likely to register and to vote, by three to four percentage points.

A third study, released as a working paper this week, looked at an earlier Medicaid expansion, when Oregon opened up its program to some childless adults in 2008. The state set up a lottery to determine who got coverage, which led to an important randomized experiment of how Medicaid coverage affects people’s lives. Unlike the 2014 research, the Oregon study was able to track voting by individual, not just region. It found that the Medicaid expansion increased voter turnout by 7 percent among the newly covered group in Oregon.

Voting is private, so none of the research could say whether the new Medicaid voters supported Democrats or Republicans. Mr. Haselswerdt, who did the statewide study, said it might even be possible that some of the voting increase by Medicaid beneficiaries was matched by increased voting by expansion opposers.

But the people eligible for Medicaid expansion tend to be poor, single adults, a demographic more likely to be Democratic-leaning. And the Oregon study showed bigger voting effects in more heavily Democratic parts of the state.

Even though all the studies detected an effect of Medicaid on voting, none of them showed one that lasted. Political science research suggests that voting can be a habit-forming behavior, but that may not be the case for this particular group. In each study, the voting boost after expansion had faded by the next election. That means that the coming expansions may make an electoral difference only once.

“Medicaid coverage policy is still front and center in the political debate,” said Katherine Baicker, a co-author on the Oregon work and the dean of the Harris School of Public Policy at the University of Chicago. “Having this kind of information about how Medicaid coverage affects not only health and health care use and financial security, but also civic engagement, seems like a really important relationship to have a little more information about.”

Margot Sanger-Katz is a domestic correspondent and writes about health care for The Upshot. She was previously a reporter at National Journal and The Concord Monitor and an editor at Legal Affairs and the Yale Alumni Magazine. @sangerkatz • Facebook