What Max Rose Can Teach Democrats About Beating Republicans

The unexpected victory of Max Rose in the 11th Congressional district, which encompasses Staten Island and a sliver of southern Brooklyn, now means that the current president cannot count a single Republican in the House of Representatives from New York, the city that invented him.

Staten Island, a Republican stronghold, skewed heavily for Donald Trump in 2016, but now even voters who remained loyal to the president were willing to give Mr. Rose, a 31-year-old former combat veteran and health care executive, a chance to prove he could reshape the fortunes of working people.

The last time this district sent a Democrat to Congress was in 2008.

In the weeks leading up to the election, I saw 15 Beto O’Rourke T-shirts for every one Max Rose T-shirt in brownstone Brooklyn, which is to say that the race failed to enrapture many New Yorkers despite the fact that it was happening in New York. In light of that, Mr. Rose’s accomplishment seems singularly impressive — as well as instructive — more so even than what Alexandria Ocasio-Cortez managed to do in her primary fight against a longtime Democratic Party loyalist a feat that left her anointed as the future of liberal politics.

But Ms. Ocasio-Cortez’s gifts of charisma are not easily scalable.

We might begin with what Mr. Rose had to overcome — the lack of any telegenic appeal or especially inspired and passionate speaking style or a claim to Staten Island imparted by birth. If you were a Vogue editor, your first instinct upon seeing or hearing him would not be to commission a 3,000-word profile and dress him in Tom Ford for the portrait.

He is a bald white man. Mr. Rose grew up in Brooklyn and moved to Staten Island only a few years ago; the Republican incumbent he was up against, Dan Donovan, has been a Staten Islander for decades. I spent much of Election Day at a large mall in the borough, and when I spoke to people who had rejected Mr. Rose, they typically offered that it was because he was “not really from Staten Island.”

His pedigree might have alienated potential constituents, but his rhetoric did not. He offered a simple, unifying message that was progressive in substance but relatively neutral in its delivery: that the system is rigged to benefit special interests, that the little guy is getting stiffed over and over, that we need better infrastructure and stronger unions.

He didn’t fight a culture war; he talked about oppressively long commuting times and the opioid crisis, which has ravaged Staten Island, and he relentlessly made the point that his opponent had taken money from Purdue Pharma, the maker of OxyContin. He managed a narrative that was both big picture and small bore. 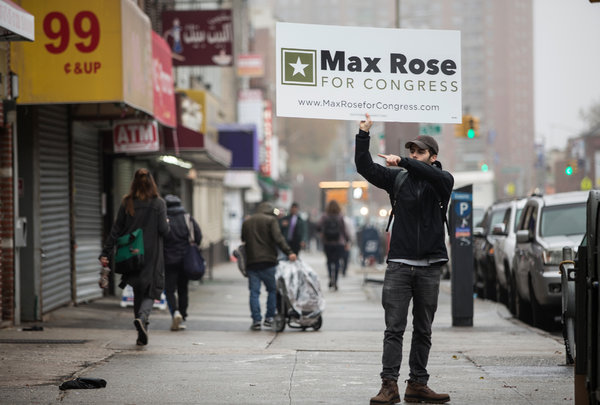 Of course, like any winning candidate, he benefited from larger forces, in this case, the realities of gentrification, which liberals so often demonize. In recent years, both Bay Ridge in Brooklyn, which falls in the 11th district, and the North Shore of Staten Island have absorbed young families and artists and people not long out of college who have been priced out of Manhattan and the more prohibitive quarters of Brooklyn. On the North Shore, it is now possible to walk into a coffee place in 2018 and order an açaí bowl.

In Bay Ridge, for example, the proportion of the population over 25 with a bachelor’s degree has climbed significantly. This change was also a big factor in the apparent ousting of Marty Golden, the Republican state senator who has represented the district including Bay Ridge for 16 years. Mr. Golden intends to keep fighting Andrew Gounardes’s narrow victory, but it was Mr. Gounardes’s candidacy that inspired so much enthusiasm, prompting both Ben Stiller and Arcade Fire’s William Butler to walk into his headquarters and volunteer.

It was not just that Mr. Golden and Mr. Donovan seemed to make so little effort to attract younger voters; it was that they seemed hostile to the idea of youth itself. This was clear in the campaign vehicle they sent up Fourth Avenue in Brooklyn on Tuesday night, a vintage car with the blaring sound of a horn that recalled Bonnie and Clyde and seemed to say, “Vote for us and we’ll all pretend it’s 1926.”

The housing crisis has also resulted in shifting demographic patterns that are less visible than the ones that give rise to restaurants with organic wines and specialty berries.

On Tuesday I met a young couple who had been living in Marine Park, a white working-class neighborhood in Brooklyn, until they wanted to buy a house, three years ago. All they could afford there were $400,000 places that required gut renovations, Dina Nosworthy, who is a midwife, told me. Homes in East New York fell out of their price range as well.

But they did find something they could afford: a two-bedroom house for $240,000 in New Dorp, a traditionally Catholic, socially conservative, white working-class neighborhood in Staten Island that is becoming much more diverse. They voted for Mr. Rose, and they were encouraged to see the blocks surrounding their house full of signs for the Democrat — a fact that would have been inconceivable not long ago.

Soon after meeting them, I ran into a middle-aged African-American couple, supporters of Mr. Rose, who had moved to central Staten Island because the rents in Park Slope, and anywhere in Brooklyn, had become untenable.

What this suggests is that the lack of affordable housing, paradoxically, has the potential to produce ideological reconfigurations at the local level that could serve as a counterpoint to aggressive gerrymandering.

On a rainy corner on the North Shore, just outside a polling site on Tuesday, a high-school student holding a Max Rose sign told me that she welcomed gentrification in her neighborhood. Staten Island was an insulated place, and now, as she put it, the passions of the rest of the world were finding their way in.