ATLANTA — Two days after Election Day, the 31 million residents of Georgia and Florida still could not say for sure who had won three of their marquee political contests. Razor-thin and shrinking leads in the vote tallies on Thursday unleashed hordes of lawyers, talk of recounts and runoffs, and the kind of bickering over ballots that brought back memories of the 2000 presidential contest.

The two states’ races for governor and Florida’s Senate race hung in the balance, and the stress was palpable for politicians and voters alike.

Officials were still counting absentee, provisional and overseas ballots, and the partisan camps were disputing how to go about it and whether those votes could still change the outcome — even in the race between Ron DeSantis and Andrew Gillum for governor of Florida, which Mr. DeSantis seemed on Tuesday night to have won.

“When I saw Gillum concede, I started screaming to myself, ‘No! It’s Florida! Let them do a recount!’” said Sherry Shepard, 44, a real estate agent from Miami Gardens, Fla.

Though she is a Republican, Ms. Shepard said she voted for Mr. Gillum, a Democrat, to protest the angry rhetoric of her party’s candidate, Mr. DeSantis, a congressman who allied himself with President Trump. She described the two days since then as a roller coaster of emotions.

“I am trying to figure out what happened, and honestly, I am suspicious of what might have happened,” she said. “I have gone from hopeful to completely disappointed, to wait-and-see to back to hopeful.”

Mr. Gillum, the mayor of Tallahassee, conceded shortly before The Associated Press called the race for Mr. DeSantis on Tuesday night, when he was ahead by more than a percentage point. But the margin of victory has since shrunk to 0.44 points — small enough to require a machine recount under Florida law — and there were still ballots to count.

In Florida’s Senate race, just 15,175 votes were separating the front-runner, Gov. Rick Scott, a Republican, from the Democratic incumbent, Senator Bill Nelson, on Thursday evening, out of more than eight million cast. At just 0.18 percentage points, Mr. Scott’s margin had become so narrow that a more thorough manual recount is required.

That probably means hand-to-hand legal squabbling over individual paper ballots, and the strongest flashbacks to the surreal legal melee over Florida’s presidential votes in 2000.

Mr. Scott, who claimed victory on Election Day, bitterly criticized elections officials in two Democratic-leaning counties, Broward and Palm Beach, on Thursday evening, and suggested that his lead was being whittled away by “rampant fraud.”

“No ragtag group of liberal activists or lawyers from D.C. will be allowed to steal this election from the voters of this great state,” said Mr. Scott, visibly agitated, at a news conference in Tallahassee. He said he was filing suit against officials in the two counties, which were centers of the 2000 election intrigue, over their handling of ballot counting.

In the race for governor of Georgia, Brian Kemp, the Republican candidate, was leading Stacey Abrams, his Democratic rival, by about 63,000 votes on Thursday night and had 50.3 percent of the total, according to an unofficial tally by the Georgia secretary of state’s office — which Mr. Kemp headed throughout the campaign. He resigned the post on Thursday. 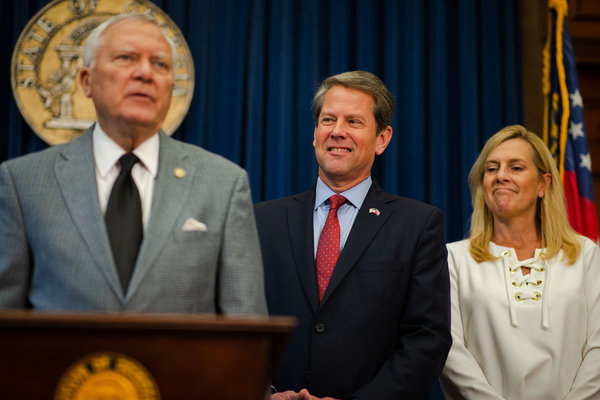 But Ms. Abrams’s campaign insists that when all the votes are counted, Mr. Kemp’s share may yet fall below 50 percent, which under Georgia law would require a runoff in early December.

Monica McRae, 49, who said she had voted for Mr. Kemp, said she would not be surprised by a runoff, and in fact would welcome one, because it could give Mr. Kemp’s victory more legitimacy.

“I think it’s a fair election,” she said, noting that she did not question Mr. Kemp’s integrity. “The voters showed up to vote for who they wanted to vote for.”

Exactly how many Georgia votes remain to be counted is a topic of hot dispute. The Kemp campaign says that there are fewer than 25,000, not enough to change the outcome, but the Abrams side insists that the figures are almost certainly incomplete and that no one could yet know the precise figure.

The Abrams team has been blanketing the state’s airwaves with ads exhorting voters who cast provisional ballots to do what is required to make sure they are counted. The state Democratic Party filed a lawsuit on Thursday hoping to extend a deadline for absentee ballots in a county affected by Hurricane Michael. Lawyers elsewhere are scrutinizing the methods some counties used to reject absentee ballots.

As prominent Republicans sent congratulations to Mr. Kemp on Thursday, Democrats did little to hide their disgust at his claim of victory, which they say is premature. And in neighborhoods across Atlanta, few residents seemed to have removed the campaign signs from their front lawns.

Ms. Abrams hopes to become the first black woman elected governor of any American state, and Mr. Kemp, who is white, has been pilloried by liberals for what they say have been voter suppression tactics on his watch that disproportionately affected minority voters.

Mr. Kemp ignored calls throughout the campaign to step aside from a post that made him the supervisor of an election in which he was a candidate. But on Thursday, facing a federal lawsuit seeking to force him out, he announced his resignation.

It was hardly enough to placate the Abrams camp, which continued with a program that it said amounted to “protecting our democracy.” Mr. Kemp’s visit to the governor’s office on Thursday particularly rankled.

“He gets up at a press conference and thinks we’re all just supposed to believe that we’re moving on and this is a resolution,” said Lauren Groh-Wargo, Ms. Abrams’s campaign manager, at a news conference.

Republicans, for their part, insisted that the contest was over.

“There are not enough votes out there to make a difference,” said Brian Robinson, a former spokesman for the outgoing Republican governor, Nathan Deal.

In its lawsuit, the Democratic Party of Georgia argued that officials in hurricane-ravaged Dougherty County should count valid absentee ballots if they were postmarked by Tuesday and arrive by Friday, after the normal deadline, because the storm had disrupted the mail system.

Ryan Mahoney, a spokesman for Mr. Kemp, said that Ms. Abrams was “desperately trying to steal this election in the courtroom,” and, for good measure, described her campaign’s news conference as an event where “angry campaign staff and liberal lawyers doubled down on desperation and conspiracy theories.”

In Florida, the gaps between Mr. Scott and Mr. Nelson in the Senate race and Mr. DeSantis and Mr. Gillum in the governor’s race have been narrowing as the state’s largest counties tally ballots that were mailed in or cast provisionally on Election Day. Florida’s 67 counties have until noon on Saturday to submit unofficial totals to the state’s division of elections.

Along with those races, four more — for agriculture commissioner, one State Senate seat and two State House seats — are also likely to be headed for recounts in Florida, a state known for close races and contentious vote-tallying.

Marc Elias, Mr. Nelson’s elections lawyer and a veteran of prominent recounts around the country, said Thursday that it was a “virtual certainty” that the Senate race would go to a hand recount. “I think that it is fair to say right now that the results of the 2018 Senate election are unknown,” he said, adding that he believed that Mr. Nelson would come out on top in the end.

Mr. Scott’s campaign has dismissed the possibility that Mr. Scott, who won his two races for governor by one percentage point, could lose his lead now. In a statement on Thursday, his team called Mr. Elias “a hired gun from Washington, D.C., who will try to win an election for Nelson that Nelson has already lost,” and added, “Let’s be clear: When Elias says ‘win,’ he means ‘steal.’”

The pace of counting is a particular concern in Broward County. The county elections supervisor, Brenda Snipes, told reporters on Thursday that she could not say how many votes were left to count, only that all mailed-in ballots had been taken out of their envelopes.

“I think we had over 58 percent of our voters voted, and each voter received a ballot package of either five or six pages,” she said when asked about why counting was taking so long. “It’s volume that causes this.”

The uncertainty was beginning to get to Jennifer Dupoux, a salon owner in the Broward County city of Tamarac. “We are three days out, and we still don’t know who is going to lead Florida,” Ms. Dupoux said. “I have been voting here since I was 18, and I don’t know what to think. This has been so stressful. I can’t even look at the news because it’s so upsetting.”

A statewide machine recount in Florida would have to be completed by 3 p.m. on Nov. 15, Mr. Elias said. If that process yields a margin of less than 0.25 percentage points in any federal or state races, manual recounts would then be conducted for what are known as undervotes and overvotes — ballots where optical scanning machines picked up no selection, or too many, for the race. Those recounts would have to be completed by Nov. 18.

Florida voters fill in paper ballots by hand using a pen, and no longer cast the punch-card ballots that produced the infamous “hanging chads” in the 2000 presidential election.

“In spite of the fact that we’re a little bit down in the numbers, we’re hopeful that every single vote will be counted in this race,” he said. “That way, all of us can walk away extremely confident about what each and every one of us did.”

Mr. DeSantis, for his part, has already announced his transition team.

Beyond Florida and Georgia, the drama of a down-to-the-last-ballot race was also playing out in Arizona, where the Senate race between the Republican, Martha McSally, and the Democrat, Kyrsten Sinema, remained too close to call. Ms. Sinema was ahead by about 9,600 votes, Thursday night. But the counting could take days to complete, and Republicans have filed a lawsuit questioning how electoral officials verify signatures on mail-in ballots.

“Bring it,” Adrian Fontes, the Democrat in charge of overseeing elections in Maricopa County, encompassing Phoenix, said in a tweet responding to the lawsuit.