Home » Americas » We were shouted at for wearing masks. This is why the situation in the US is so dire

We were shouted at for wearing masks. This is why the situation in the US is so dire

We were shouted at for wearing masks when we turned up outside Houston City Hall.

We had just arrived to interview a very small group protesting about the Texan governor’s decision to make the wearing of masks mandatory to halt the spread of coronavirus.

As others nodded in agreement, protester Oralia Acosta called us “stupid” for wearing facial coverings. 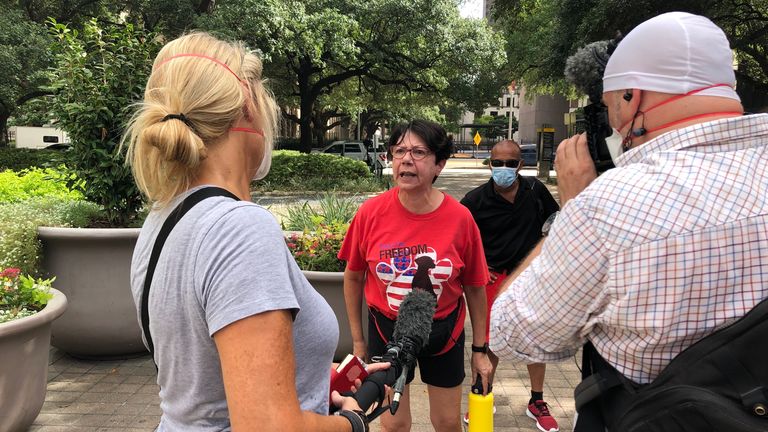 She said we were “pushing the fake news agenda”, consequently perpetuating the “feeling of terror” about a disease which they believe is an exaggerated hoax – a view already espoused by Donald Trump.

“Why are you wearing a mask in this heat?” she shouted. “When you pass out, don’t ask me for help cos I’m not going to help you.

“It’s my right to decide whether I wear a mask or not!”

It is a view which appears to be gaining traction.

This is what public health officials in the US are up against. This is why the future predictions of COVID-19 infection are so dire.

America’s Fourth of July birthday bash was a very different affair this year and nowhere more so than in Texas.

Most of the fireworks shows were cancelled and turned into virtual displays. Parades were called off and street parties abandoned.

But despite still recording daily highs in infections, some Texans refused to be cowed by the deadliest virus sweeping the planet today. 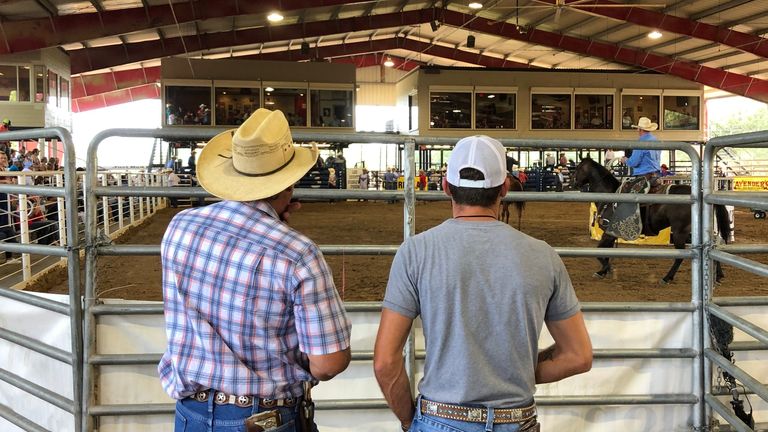 We watched as hundreds in Giddings, in Lee County, crowded into an arena to take part in the local holiday weekend bull-riding competition.

Few were wearing masks, despite an order from the governor making it compulsory. Even fewer expressed concern about the virus that has killed tens of thousands of their countrymen and women.

“I’m not worried. What’ll happen will happen,” said one young woman. “If I’m meant to go, the good Lord will take me.”

The Independence Day celebrations are traditionally a time for unity, but the collision of coronavirus and the ensuing unemployment, and the scourge of racism raised by the killing of George Floyd, has put paid to that.

The imploring by public health officials to wear masks, keep socially distanced and preferably stay at home was basically ignored at the bull-riding show. Dozens of cowboys vied to demonstrate their masculinity and prowess on a bucking bronco to cheers and jeers from the crowd.

The temperatures were well over 30C. Being ordered to wear a mask is uncomfortable in these steamy conditions and viewed by most as, at best, unnecessary, and by some as an affront to their freedom, which this holiday weekend has been all about.

“I’m an American and I feel like I should do what I want to do,” one cowboy told us. “I pay my taxes, I live free, I wanna be free.”

But in an interview with Sky News, Dr Peter Hotez, who is respected internationally as an expert on infectious diseases, warned that the stubbornness of some Americans to adhere to health advice would only prolong the devastation of the disease.

“We are in one of the worst parts of the epidemic,” he said. “The numbers are increasing dramatically.

“This is just the beginning… they will double in the next two weeks and then double again the week after that.”

He insisted that even the most dire forecast by Dr Anthony Fauci – one of the lead members of Mr Trump’s coronavirus task force, who has warned the number of daily infections nationwide could reach 100,000 – could be dwarfed in the coming weeks.

Testing sites appear to be overwhelmed.

At one site in Houston run by a charity, vehicles snaked around several blocks to receive a free test. 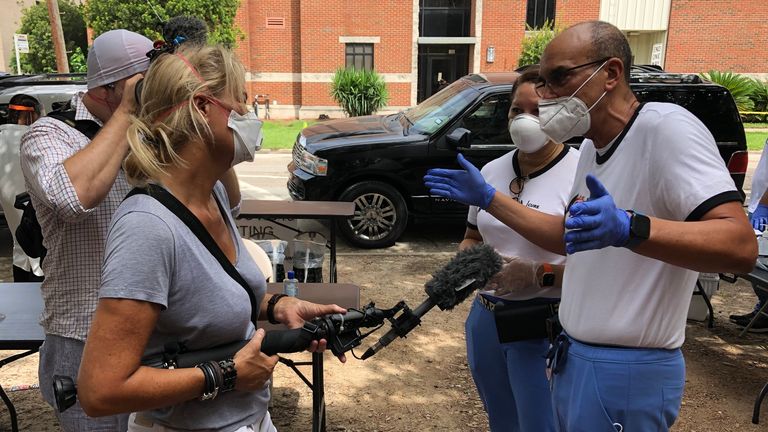 Dr Joseph Gathe of the Cure COVID Consortium, one of the lead doctors running the site, says the virus is rampaging out of control in the state.

“And our response is not in an organised fashion,” he said. “We can’t get the toothpaste back in the tube but we can stop squeezing… and do what we can with those that have not been able to get things done.”

The pandemic has wrenched livelihoods from millions across the country and in Texas, everyone we spoke to queuing up for food parcels in downtown Houston told us they were doing so for the first time.

Proud men and women who have worked all their lives and provided for their families throughout their lives, now stung by the humiliation of relying on others to ensure they are fed.

For Charles Moore, who has a Black Lives Matter mask across his face and is wearing plastic gloves, it is difficult to put into words.